A Hitchhiker’s Guide to Iceland

In honour of Taste of Iceland, I am taking a trip down memory lane. Over the summer, I visited my Canadian friend Tally after she finished up an artist residency on the Icelandic island of Hrisey. With the magic of technology and the challenge of three different time zones as a third friend in England wanted to join us, we planned the entire thing without any voice-to-voice communication. After we booked a Wes Anderson-Grand Budapest Hotel-style hostel in the Golden Circle for a few days, the only thing left to figure out was: how will we get there? Tally suggested that we hitchhike. Skimming through my messages and too excited, I said sure and Rachel agreed. It was only when we got together that I realized what I had agreed to….

We had no car… All our belonging on our backs… The roads were long, thin and desolate… We had an Icelandic map and a vague idea of our hostel location… And yet, after a few days of Reykjavik fun, we set off on a city bus to a road stop beside a major highway. As I waited curbside for my first-ever hitchhike, standing in drizzling rain with a box of gas station pizza, I started cursing our idea in my head. What were we doing?! I have a full G license and money to spend! Why am I exposing my beautiful body and mind to these harsh elements and potential kidnapping situations?! Alas, I tightened my windbreaker hood and stuck my thumb out. 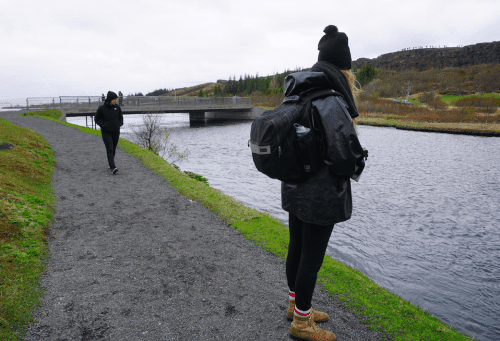 As I went through the journey, I kept a note in my phone so I would not forget each and every person who helped us along the way. Here is their tribute and a hitchhiking route if you ever feel like taking a similar journey.

Helena was the perfect person for an entry-level hitchhiker like me. She was an old, cute grandmother who lived out in the country and had a SUV fit for our three heaping backpacks. She introduced us to the fact that many Icelandic people fiercely believe in elves. She herself said she sees them around in the mountains! Genuinely intrigued (would we see elves?! No. Too new in town.), we asked many questions about the nature of these encounters and Helena told us about her friend who is a medium. As a parting gift, she dropped us off at a museum in a strip mall that is purely dedicated to an earthquake that happened in 2008. It came complete with an earthquake simulation where you are violently shaken in a small indoor shed. Thanks a million, Helena.

Across the street from the museum, we met Karl, The Hot Dad. He was a gym teacher with a presumably lovely wife and two children. When he mentioned that his little boys play fight all the time, he said, “I think that’s how guys express themselves.” I was so touched and thought it said a lot about his character and humanity that this quote is one of the only two things I wrote down about him. It was a short ride that didn’t take us all the way to the Gullfoss waterfall like we were hoping.

It was hard to find Karl #2! It started raining more. We had to be strategic, and box out some other hitchhikers like Mean Girls. But once we did, it was perfect. Carl #2 was a stereotypical stoner type whose ears only perked up when we asked if he could teach us Icelandic swear words. Complete silence turned to complete hilarity. One of the worst things you can call someone in Iceland translates to “Hell Devil” and we repayed him with our best Quebecois curses. He wasn’t going to the Gullfoss waterfall, but he actually worked as a burger flipper at the café for the popular Geysir attraction – a watery hole that randomly, yet frequently, shoots up boiling hot water up to 70 meters in the air. We thought, “What the hey,” we’ll go to Geysir now and then go to the waterfall. Later, when we wandered into the gift shop, we saw Karl #2 and waved like we were all best friends. 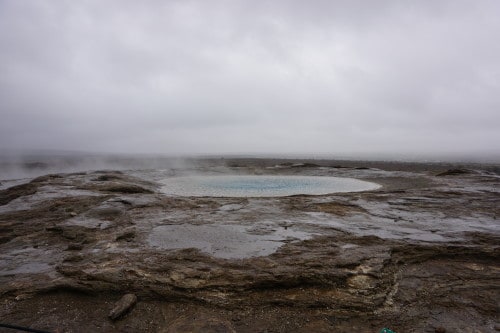 Didn’t make it to the waterfall. We saw the Geysir, ate some mutton soup hoping for the progressively worsening rain to end and then stood outside only to get completely drenched. This was maybe the most hopeless I have ever felt in my life – my exposed thumb getting pruney and cold from the torrential downpour. Then came, the Angel Couple from California. They were horrified that it took so long for us to get picked up and had the patience of our parents through the worst phases of high school. We didn’t know how to get to our hostel, and they just went with it like the cool California couple they are. I maxed my phone plan calling the hostel and getting play-by-play directions so we didn’t wear out the welcome. Home safe and sound. Greeted at the hostel with an upgraded private room and a receptionist who said he was an elf.

The next day, we shopped for packed lunches in the morning. I got some more road pizza, which I layered in foil, put into a plastic bag and had swinging off my purse because that’s just my style. We were quickly picked up by a grandfatherly man, who told us that he ALWAYS breaks for sheep. Important. He was a technician at a university in Iceland and insisted that we spend quality time at the National Park. It is actually a Unesco World Heritage Site! We took his sage advice and spent the whole day hiking around tectonic plates and exploring.

How to get home from the park? We found another dad. This one’s SUV smelled like horses and he had an unsecured table saw in the trunk. That was a bit scary. I took a picture of it for evidence, I guess. Our hostel was converted from a schoolhouse, and he went there as a child. I sat in the back and kept quiet after an active day. We rewarded ourselves with a dip in the hot spring-heated bathhouse next door, Fontana (yaaaaaas). 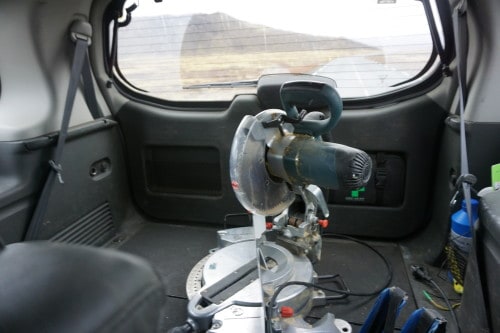 The next day, we stuck out our trusty thumbs and were met by a stunning Parisian couple. They were going to the Geysir, then the Gullfoss. Our brains got thinking – we could wait out their Geysir viewing, and get a ride to the waterfall. They were down, and let us keep our bags locked in their trunk while they looked around. I watched their car from afar like a hawk; petrified they would leave without us and drop our bags in a ditch. The free ride was almost not worth the stress. Fortunately, they turned out to be harmless and nice people who made good on their promise.

My favourite of the hitchhikes and our fastest pickup ever! A big old camper van pulled up, and three blonde Swedish bros stuck their heads out of the window, waving for us to come on in. They were a couple years older than us; each of them was over 6’’3 with light eyes, great street style and glowing teeth. Safe to say, they literally looked like models stepping out of Stussy lookbook even though they’d been living out of a van together for a week. The interaction was roughly an hour, about halfway back to our desired Reykjavik. In that time, we hardcore bonded over more swear words, Swedish slang (let’s go schnappsing, ja!), and the differences and similarities between Sweden and Canada. A cross-continent visit is definitely in order! After they dropped us off near a lake in the National Park region, we exchanged Facebook information and I’m 99% sure that my friend is still sexting one of them on a regular basis.

Last but not least, a saint of a scuba diving instructor picked us up in his panel van. At first he was like, “Is there enough room for you guys though…?” But before he could finish his thought, we were putting our bags in his trunk and moving around a lot of wet scuba gear like a game of Tetris. See, plenty of room! I sat in the back, feeling totally at peace that it was the last ride of our journey. He was a great tour guide, telling us more stories about elves and breaking down his decision to move to Iceland from England.

The quest was not without difficulties, but I am glad that we did it. It is both a funny sentence and a badge of honor: I hitchhiked the Golden Circle in Iceland. The moral of the story is that if you decide to go hitchhiking in Iceland, you may not see as many sights but you will make up for it with the stories. Thank you, kind strangers. 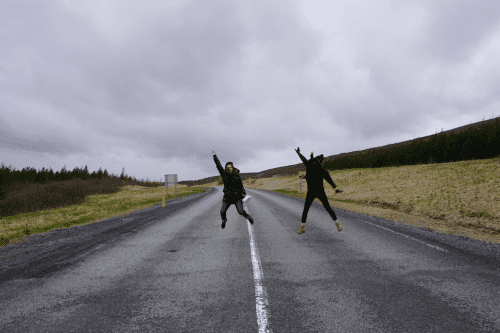