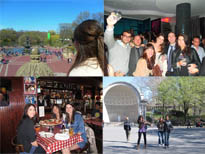 A little bite out of The Big Apple: Where to eat, dance and shop with only 72 hours in NYC.

Even though I grew up in downtown Toronto, Manhattan makes me feel as though I was actually reared on a small chicken farm. I routinely block pedestrian traffic as I stare above, at the towering buildings, and sidelong, down streets that seem to extend into eternity. A weekend in New York City can be as overwhelming as it is fun. Here is a sampling of some of the things you don’t want to miss.

Staten Island Ferry: No trip is complete without a boat ride, and why not get some sightseeing in while you’re at it? The ferry takes you right by the Statue of Liberty and allows for a stunning view of the southern tip of Manhattan. Bonus: It’s free.

Central Park: The enormous trees, walking paths and lakes transform the centre of this bustling city into a serene oasis. You can often catch an impromptu performance under the Bethesda Terrace, a stunning symphonic structure near the West 72nd street entrance.

The High Line: This freight rail line was set to be demolished until the city decided to convert it into a public park. It runs from Gansevoort Street in the Meatpacking District to West 34th Street, between 10th & 11th Avenues. Hop on and off along the way to explore Manhattan’s West Side.

Have a cocktail or a cappuccino at Vbar. Come 5:30 everyday, Vbar transitions from cafe to bar: Candle light substitutes for overhead lamps and the beer fridge is filled as the pastry cases are emptied. A sign out front reads: “Productivity in the morning, promiscuity in the evening.”

Laugh until you pee at the The Upright Citizens Brigade. Performers put on a free show Sunday night. If you don’t line up early, you will end up standing, but with $3 cans of PBR and some of the cities finest comics you’ll be laughing too hard to mind.

Go antique shopping with a cocktail. Well, not exactly, but this sumptuously decorated supper club is hidden behind the cash of a small antique shop. Think Elvis memorabilia in the front and fur panelled walls, grand chandeliers and sweeping staircases in the back. Beauty and Essex.

Dance at some of the city’s gilded and glittering hotel bars: The Jane hotel & The Gansevoort hotel.

For breakfast, try Le Parker Meridien hotel. We ordered four dishes but asked that they come out in succession so we could split each one: Waffles, pulled pork, eggs benedict and lobster mac and cheese. Bonus: The restaurant leaves elegant pots of coffee on your table so a refill is never too far away and a server tops up your orange juice as you sip.

For dinner, Pearl Oyster Bar. This Greenwich Village gem is famous for its lobster roll but it’s entire menu is delicious. I should know, I ate my way through most of it. Go here is a group and try everything. You won’t be disappointed.

Skip the big chain stores on Fifth Avenue, which are bigger and more opulent versions of the same shops we get in most major Canadian cities, and forget Century 21, or “Winners-on-steroids” as it’s sometimes called. Instead try these:

Open-air markets: I stumbled upon Green Flea down the street from our apartment in the Upper West Side. Vendors sell antique furniture, vintage clothing and handcrafted items. Open Sunday from 10am to 5:30 pm, located on Columbus Avenue between West 76th street and West 77th.

Canal Street: Probably not the most ethical, but it feels like a rite of passage. The immediate thrill of the bargain is far superior to owning the fake goods which invariably start falling apart upon purchase. Hustling tips: point out flaws, feign disinterest in negotiations and carry small bills.

If you don’t have a friend’s place to crash at, Air B&B is the next best thing. You choose your desired area and how much you’re willing to pay. We scored three nights at a spacious two-storey, two-bedroom walk-up with two balconies overlooking the Upper West Side, for $170 per person. Bonus, our hosts left us their champagne bottle sabering dagger, not your typical hotel accoutrement.

Air Canada flies into LaGuardia, which is the most accessible airport to Manhattan.

I flew from Montreal the same weekend of the airlines’ 1950 inaugural flight from Montreal to LaGuardia. This airport also has a great shuttle service. It took fewer than five minutes to board a shuttle after I got through the arrival gates. For $16 dollars a driver dropped me to my doorstep on the Upper West Side. It took 30 minutes. A taxi will cost you about $40.