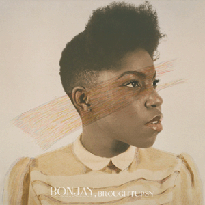 A Q&A with our latest obsession, meet the XX half of Bonjay, Alanna Stuart.

Turn it up. Bonjay’s is best served in the following situations:

1. At the climax point when the living room mixed bag get together turns into a raging 2AM dance party/grind-fest.

2. Help me! I am so tired, bored and going to punch that bitch in the next cubicle. I need to wake up, escape or Bonjay!

3. It’s Monday night, where’s the mother fucking party at? BONJAY AT WRONGBAR this MONDAY! Bonjay  will be performing live with Little Dragon.

Frontwoman Alanna responds to our queries about sound & style:

SDTC: What are some of your biggest style inspirations, musical or otherwise?

Alanna: We gravitate towards the subtle and classic, making .a splash with less. We like clothes that are cut properly from quality fabrics, with just the right amount of unique details to set them apart from the rest. And how we put those pieces together to make them ours is important too. Music to clothes that’s how we do it. If I had to name someone whose style is clicking with me at the moment, it would be Charlotte Gainsbourg. Classic pieces worn well.

SDTC: Your new album is titled, ‘Broughtupsy’, what does this mean?

Alanna: In Jamaican patois Broughtupsy means “well-mannered”. If you’re rude and not well-raised then you don’t have any broughtupsy.

SDTC: What’s the craziest dance party you’ve ever been to?

Alanna: Well we’ve performed and deejayed at enough crazy nights that it’s hard to pick one. The best party we’ve ever attended might have been on our last tour. We had the night off in Baltimore on Halloween Sunday and our hosts took us to a Dan Deacon party at someone’s house. It was on the west side of Baltimore where they filmed The Wire, so it was a pretty bleak neighbourhood, but once we got inside it was just wild. Experiencing Dan Deacon playing to his hometown crowd was something special. I never really got him before. When we literally nearly collapsed the floor, I got it.

SDTC: Who are some other Canadian musicians you listen to?

Alanna: Canadian music is in a really good place right now. Whenever we’re in other countries we always get an earful about the other Canadian bands they’re into. Caribou, Kyrie Kristmanson, Bahamas, Maylee Todd. And of course our friends like Egyptrixx, Grahmzilla, Poirier, New Look from Hamilton, and a lot of others.

Alanna: We collaborate on everything but we each have our specialties. Ian will start by sketching out some instrumentation and melodies on his synthesizers and percussion. But he leaves a lot of space for me to flesh it out, adding vocal melodies and rhythms. He tends to think pretty conceptually, while my inspiration comes from the natural chemistry between my voice and his instrumentation. Once I know where I’m going with my voice, we’ll sit down to decide what the song is going to say. Then we start adding words.

Our music is rhythmic and bass heavy, with a lot of our influences come from dancehall reggae and other club music. But our lyrics and song topics are more singer-songwriter oriented. So we try to take the innovation and new sounds from beat-oriented music and marry them with the more thoughtful side of music.

Sometimes it’s painstaking because we are never satisfied, but it’s fun because the challenge never ends.

SDTC: If you could perform onstage with anyone, who would it be?

Alanna: If there’s one consummate performer whose energy and craftmanship we really admire, we’d have to say it’s the late great James Brown. If we’re going to learn we’d like to learn from the best. And he was it.

Beyond Monday night’s show at Wrongbar, Bonjay will also be doing a DJ set this Friday, Jan 14th with DJ Fase & Tom Wrecks