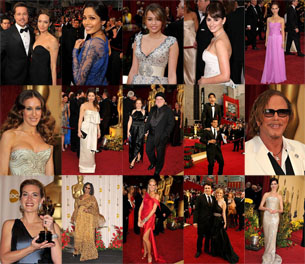 In past years, Slumdog Millionaire would have likely scooped up best foreign film, can we attest its landslide win to the Obamarama wave of change? YES WE CAN! Well maybe not but it makes for interesting discourse. However, before we give Hollywood too much credit let’s not forget the three bird-brained hosts of the Red Carpet Pre-Show who collectively offered up zero food for thought. Celebrities eyes rolled as they sized up outfits with vacuous remarks; talk about bland adjectives.

Tim Gunn, for one, had nothing to say except that everything was gorgeous. We especially loved how he pulled over Brad and Angelina to let them know “You guys are so glamourous”, but in a tone that suggested this was a novel remark. Yawn, they must get so bored. Also loved how Jess Cagle asked Robert Downey Jr. “…would you like to introduce your lovely date.” “My date, yeah, she’s my date for the rest of this incarnation, Susan Downey.” Do these people do research ahead of time? Or are they kind of skimming a cue card en route to the red carpet “Okay – who is it for best picture? Is Milk the gay one?”

Hugh Jackman got things started with an Oliver Twist song and dance about the recession. Funny parts included the “Craigslist Dancers” in mismatched outfits and a confession that he had not seen The Reader, so introduced with a jazzy modern dance that actually had no correlation to the film. Yes, he was charming, but when are we bringing back Billy Crystal – City Slickers – hello! It’s legendary.

What was different about the 81st Academy Awards were the heart-to-heart mega panels that introduced best actor/actress and supporting actor/actress.

Things really kicked off when Penelope Cruz won for Best Supporting Actress and we got to hear her ever-so-endearing accent. She could talk to us about cement being poured or how to plunge a toilet and we’d be captivated and turned on.

We thought the stage would split due to diva overload when Halle Berry, Sophia Loren, Shirley MacLaine, Nicole Kidman and Marion Cottilard projected their weepy heart felt messages to the nominees. This new hot shit panel approach really pumped up the drama; exceptionally mushy. Although we had our fingers crossed for Anne Hathaway, we were happy the regal Kate Winslet won. Almost as impressive as her little gold man was Dad’s fierce and resounding whistle. Did they plan that?

No surprise that celebrity gawkers complained: “Ugh, can’t they lump sound mixing in with the awards they give out at the technical Oscars luncheon thing?” What did we miss most? Jack Nicholson’s jack-o-lantern grin and dark shades.

Perhaps the most ill-timed joke came from Bill Maher following the Heath Ledger win:
”Everyone’s crying, now I have to go on.” Following this, he plugged his doc Religulous and made a jab at God, which left the audience silent. Gulp.

We weren’t surprised that Benjamin Button won for best make-up – I mean, it’s a pretty solid fact that if you turn the beautiful people ugly you score an award; especially when earth’s hottest man is shrunk into a dehydrated gargoyle raisin baby.

Best line in a thank-you speech goes to Sean Penn: “YOU COMMIE HOMO LOVING SONS OF GUNS”…followed by admittance to his bad boy ways, “I do know how hard I make it to appreciate me often.” He thanked his best friend, producers, Gus Van Sant, writer, Cleve Jones….referred to the leathery Mickey Rourke, flash dance-attired with a gleaming silver tooth, as ‘my brother’ but failed to mention Robyn, his wife? Hmm. Oh well, we were glad he stuck it to those right wing bigots who still protest against gay-marriage. Following this, we couldn’t help but wonder if Milk sales would rise.

Was it a night to remember? Yes, but we would have enjoyed more if someone had worn a swan around their neck or took the mic hostage to furiously rant all their hatred at the world. Either Michael Moore needs a new adversary or Jennifer Aniston needs to finally snap.