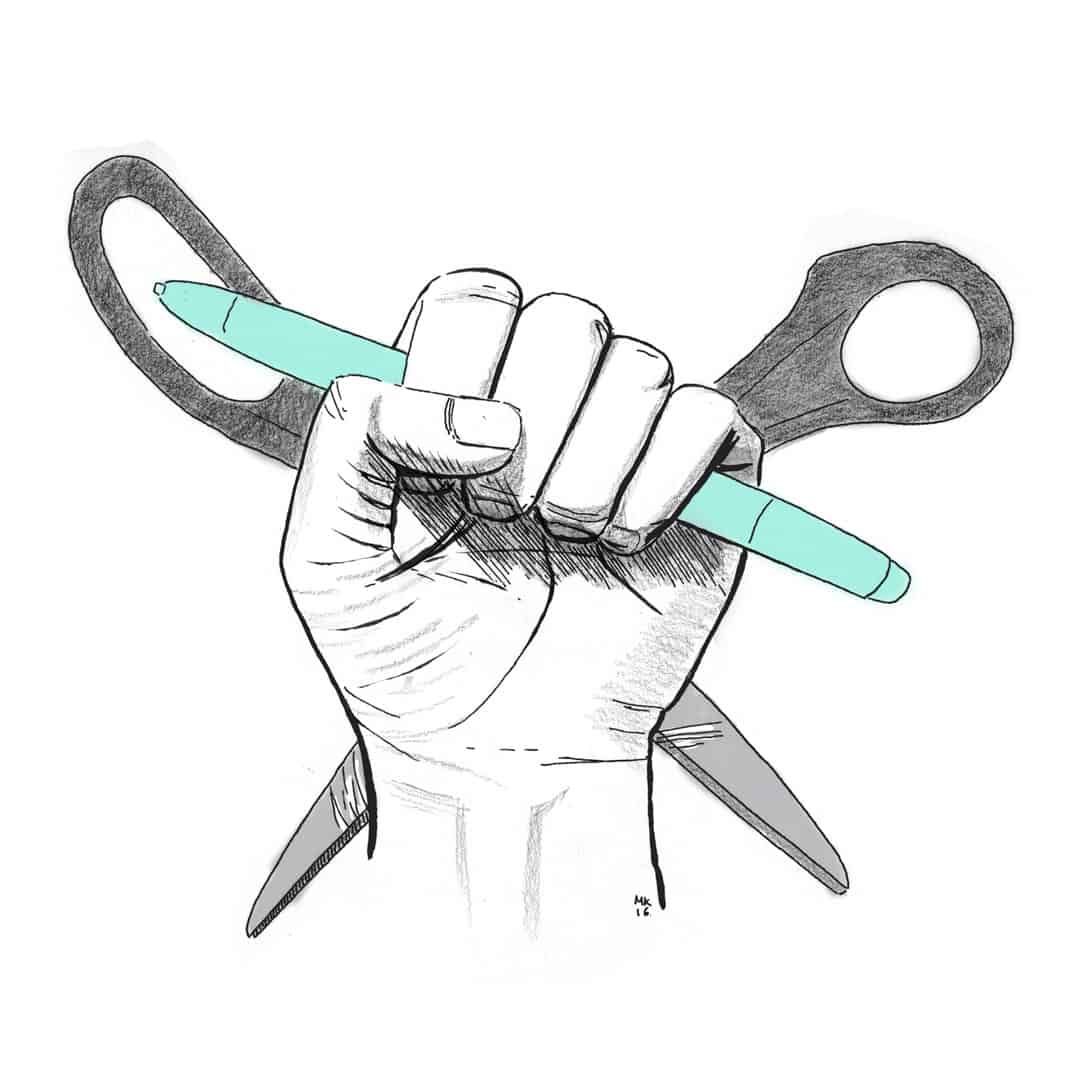 Adult Learning: There is power in a union

For two and a half years, I have been working as an Art Director at a fairly high-profile publication. It’s really hard to find a gig in the arts in the city I live in, and I was really worried that I was going to have to either move away or get a job outside of the industry I’d been trying to build a career in. So getting this job was a dream come true.

When I was hired, I was assured that the surprisingly low starting-salary was a temporary side effect of losing a couple of big advertising clients and having to tighten up budgets as a result. My new bosses told me they’d raise it as soon as they could, but hoped the flexibility of being able to work from home sometimes and take a couple of weeks of vacation each year would make up for it.

A couple of years in, though, and I have never actually been able to take a vacation, because there is no one to do my job when I am away. And the “work from home” flexibility has sort of turned into “always being on call.” And, while I am still waiting for the raise I was promised when I got the job, I’ve recently learned that a man hired later than I was is being paid more than I am. (I am embarrassed to say I actually thought that stopped happening in the 1950s.)

To make things even worse, the owners of this publication seem to be doing fine. They have mortgages and cars and kids in private school, while I am hustling for freelance work on the side to pay my bills. Most people in my department are similarly scrounging to get by, and while we are all thankful to have a “cool job,” the conditions are grinding us down and the salary disparity between staff and management (and men and women) is starting to feel really gross.

What can we do about it? We’re not all going to quit, and we’re all afraid that any agitators will be fired for sure.

To be clear, I am not expecting six figures here. I just want a one-bedroom apartment and to be able to buy bananas and fancy cheese without panicking.

I hate the fact that everyone is supposed to be so thankful for a job right now, creative or otherwise. It has created this culture where it is really scary to try to stick up for yourself at all. And I am so outraged that you are making less than a man who has fewer responsibilities than you do. I spent at least an hour wishing endless papercuts upon him, but I guess it’s not his fault exactly. So I’ll transfer those imaginary papercuts onto your bosses.

The conditions you are describing seem to be happening in every industry right now (always?). When we talk about these things with our friends and families, folks might say, “That’s illegal!” and look at us expectantly as if we a) have any way of knowing if that is true and b) have any way of making employers follow the law. I mean, are you going to go to the labour board a dozen times a year? Probably not, you are already completely maxed out.

But even though you are maxed out, I think you maybe need to consider teaming up with your co-workers and unionizing your workplace. I can’t say that will be a less demanding or stressful process than going to the labour board on your own behalf. But you won’t have to do it alone (I mean, you won’t be able to do it alone), and it could make a huge impact on your quality of life. There is a reason the Gawker staff just voted to unionize, and Vice Canada are trying to do the same. When bosses have yachts and editors have three roommates, there is for sure some kind of imbalance that needs to be righted there.

I got my first job when I was five years old, acting in a McDonald’s commercial. Aside from forever tanking any gold-star activist credibility I could have had, this commercial set me on a path of joining my first union, ACTRA. I remember the day my folks got the call; I had finally booked enough commercials/movies/whatever to become a full-fledged member (I think the requirement was six credits, at the time). My parents were super excited, but I had no idea what it meant.

It was soon explained to me that what it meant was, essentially, I would get treated better. For starters, I would be paid more, because the union had negotiated a minimum rate for all of its members. It also meant that certain working conditions had to be followed, like the fact that as long as I was under 12 years old, I could only work eight hours a day.

I feel pretty lucky that I got to join a union so young and have even the simplest parts explained into my tiny mind. Because the labour movement is completely baffling and the only people I know who truly understand it are the people I met while working as a Communications Officer at the Canadian Union of Public Employees, twenty years after my acting career ended. Because unions don’t do a great job of explaining what they do. Not to members, and especially not to non-members.

This is not because those departments are not full of genius creative people, because they are. Yet somehow, there is something about the process of getting a good campaign idea out the door that involves running it through Google Translate 87 times and then putting it in Wingdings and up on a billboard and wondering why the public doesn’t support every strike action that takes place, and why we are not all signing ourselves up to join a union.

I bring up these communication follies only to reassure you that if you don’t know that joining a union might improve your workplace, or have any clue as to how to do that, it’s not your fault. Canada has had decades of increasingly unfriendly governments towards workers, and for some reason we don’t learn this stuff in school at all. I think most of us tend to think of the labour movement only in the context of our lives being disrupted by strikes, because we rarely hear about the vast majority of negotiations that don’t get to that level of conflict.

Here is the thing: I love collective action. I love solidarity. I love when Charlotte says, “NO!” to Mr. Big in the Sex and the City movie while Carrie sobs against Miranda’s chest. People going to bat for each other is one of my favourite things in the world, and on an emotional level that is what I love about unions. I love hearing stories about members voting unanimously to raise their own dues in order to continue to offer strike pay and support to members locked out of jobs for a year. I love that unionized plumbers in Flint, Michigan, are volunteering to install water filters for free because the local government is poisoning citizens. I love thinking about the queer community and the striking coal miners working together to fight Margaret Thatcher in 1980s Britain.

But most of what unions do isn’t very cinematic. It’s researching best practices for workplace health and safety. It’s hiring economists to write reports about the impact of privatizing public transit. It’s sitting down in an aggressively beige boardroom and negotiating wages, benefits, and working conditions on your behalf.

But even though a lot of that work is very boring to hear about, it does make a difference. Union workers earn five dollars more an hour than non-unionized workers in equivalent jobs. The pay gap between men and women shrinks dramatically, even if the union has to spend hundreds of thousands of dollars taking that fight to the Supreme Court. Most workers have some sort of medical benefits. And your employer can’t just fire you if you try to stick up for yourself.

Most importantly, you have a legally binding contract that details your working conditions, rights, and wages, rather than rules that seem to be ever-changing and inconsistently applied. And if that contract is not being followed, you can call someone who will advocate on your behalf.

Listen, I know unions are far from perfect organizations. There are an appalling number of white guys in leadership roles, the same as anywhere. A lot of union leaders are needlessly adversarial or needlessly agreeable. I could talk for literally hours about everything I would do to improve the labour movement if I were in charge. That doesn’t change that fact that it is much harder to fight any fight on your own than it is as part of a resourced and dedicated organization, alongside other people fighting that same fight.

I realize this is a lot to try to sell you on in one advice column. Try to find the capacity to give it some thought, and do your best to figure out if your co-workers might also be down. You probably don’t know how to actually unionize your workplace (most people don’t!) but if you have a few minutes to do some reading, CUPE actually lays out the process pretty clearly for you and provides you with an email address of a person who can get that conversation started at least. It’s really nice to have any help at all, you know?

Anyway, I promise no one will make you sing any Billy Bragg songs in order to sign up. That comes later.