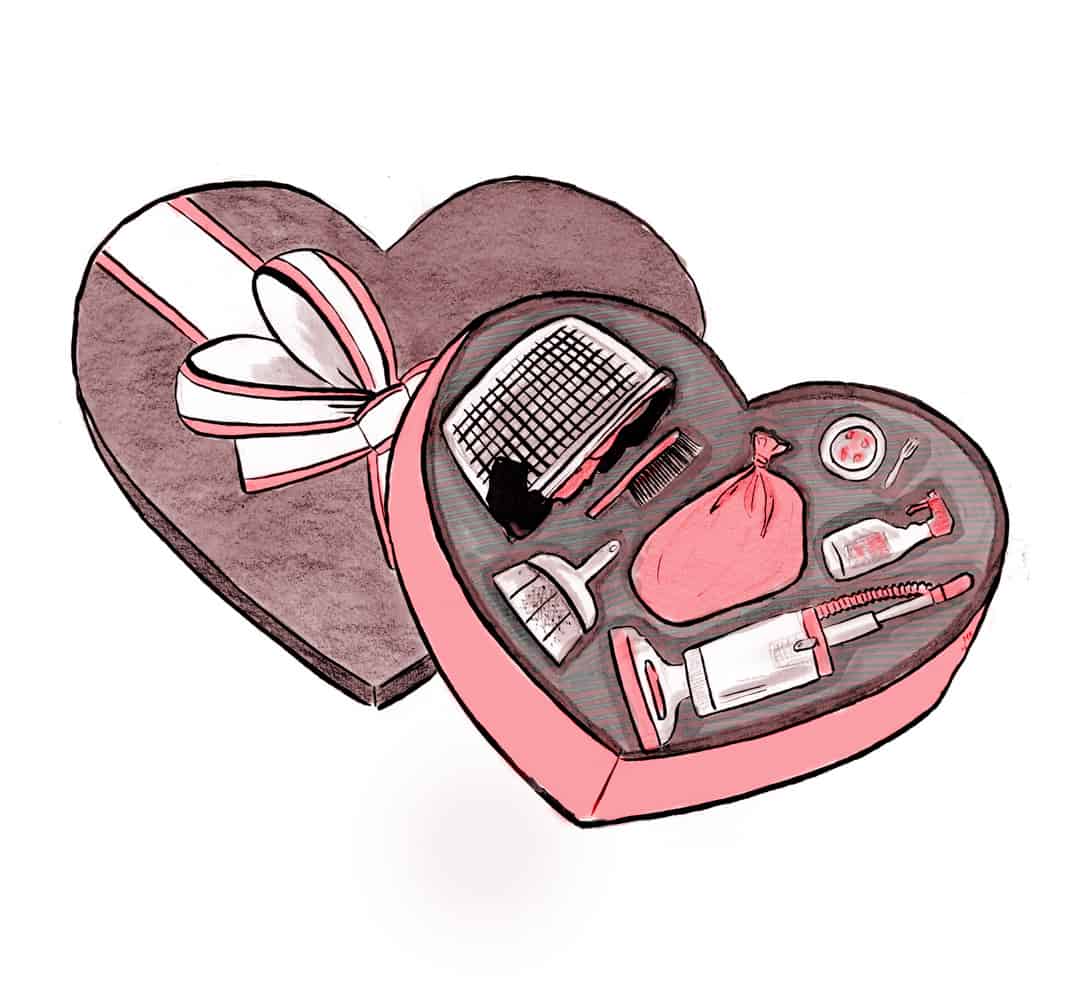 Adult Learning: When society groups men into one kind – the horrible kind

When I was trying to find a Valentine’s Day card for my wife last weekend, I was so frustrated by how horrible the bulk of the cards were. They mostly consist of “Happy Valentine’s Day from your lazy incompetent jerk of a husband.” Why does Hallmark think there is only one type of husband: the horrible kind?

Signed,
A Husband Who Does Dishes

I hope you had a good Valentine’s Day! I’m sorry you couldn’t find a card that you felt matched your family dynamic. I totally know that feeling. My family and I actually manufactured our own cards (with the help of Mariel Ashlinn, the super talented gal who illustrates this column), because we were so fed up with the lack of options for people who were non-monogamous and/or wanted to celebrate their friends as much as their romantic partner(s).

It’s interesting to hear that even someone in (what I am admittedly assuming is) a more traditional relationship is similarly struggling. Truly our culture seems to be pretty broken when it comes to how we view romance. So many things seem to reinforce the message that all couples secretly (or openly!) just resent and tolerate each other.

As far as these cards go, there is so much to unpack here that I almost don’t know where to start. On one hand, they are very insulting and demoralizing to men who do their fair share of domestic chores. At the same time, they normalize (and, in fact, turn into a sort of punchline?) the fact that women still do the bulk of the domestic chores in relationships. A 2008 study from the University of Michigan showed that even for women who didn’t have children, getting married resulted in seven more hours a week in housework for them. It’s like, get a husband, lose an hour a day of your life to laundry and cleaning. Here is some more interesting data: middle- and upper-class men are far less likely to take on an equal role in domestic tasks than working-class men; and even though Millennial men are more likely to purport a desire for egalitarian relationships than their fathers were, their attitude becomes much more traditional once they have kids of their own.

You know what, though? Even more than suggesting you read all those articles, I’d encourage you to spend some time reading through this public thread that started on my Facebook wall when I posted a personal essay written by a man who had finally realized why his wife left him. It was called “She Divorced Me Because I Left Dishes By The Sink,” and this was my favourite paragraph:

I always reasoned: “If you just tell me what you want me to do, I’ll gladly do it.” But she didn’t want to be my mother. She wanted to be my partner, and she wanted me to apply all of my intelligence and learning capabilities to the logistics of managing our lives and household. She wanted me to figure out all of the things that needed to be done and devise my own method of task management.   I wish I could remember what seemed so unreasonable to me about that at the time.

The post clearly struck a nerve all over. It had close to a thousand shares, and then comments were divided between men insisting this wasn’t a gendered issue and women saying a variation of “Yes, this is exactly why I left my husband.” The most astonishing thing to see, though, were things like a woman tagging her husband and saying, “Read this and you might understand why I get annoyed when you don’t put your dishes in the dishwasher” and her husband actually replying with “Blah blah blah.”

As I have written about before, there are so many fantastic feminist women who are dating complete man-babies, and it is grinding. us. down.

Something I find pretty telling is that in movies, a husband is often set up as an obvious villain if he is violent, while a wife is often set up as an obvious villain if she tries to crush the husband’s dreams by wanting him to be a responsible and considerate partner. And our standards for what that consideration looks like are staggeringly low. When test audiences for the 2012 Mike Birbiglia film Sleepwalk With Me saw an early cut of the film, they couldn’t figure out why the main character’s girlfriend even wanted to be with him. When the film was edited to include a scene where that character gave her a sandwich while picking her up from work, suddenly audiences were super into this otherwise completely imbalanced relationship.

What I am saying is, as much as it is lousy for men to see themselves reflected in popular culture as lazy and inept, they also unwittingly (and often unwillingly) benefit from things that reinforce these insulting ideas. Because as much as men are being sent the message, “You probably can’t even boil an egg,” women are being sent the message “You better make sure all of men’s basic survival needs are being met, because they can’t do that on their own.” And so, the cycle continues, until someone does something to fix it. But who?

So maybe I need to turn this back around. Maybe instead of asking why greeting cards don’t reflect the fact that men are equally responsible for domestic tasks, we need to figure out why so many relationships don’t reflect it. And then work to change that narrative. Speak up the next time you are at a family gathering and the men head to the couches after dinner while the women head to the kitchen. Make a point of modelling caretaking and domestic chores with any young boys or men in your life. Start difficult conversations with men you know.

Thanks for wanting to be part of the solution, <3
Audra