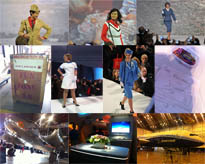 Air Canada celebrates its 75th anniversary, and the launch of the Air Canada Foundation, with a DreamLiner jet and a runway show of vintage flight attendant uniforms

To celebrate its 75th anniversary and the launch of the Air Canada Foundation, Air Canada invited us to a hangar at Pearson for an awesome retrospective of flight attendant uniforms through the ages! Air Canada has been doing good work for years, giving plane tickets to sick children and their families so they can access care, sending pilots in full uniform to read to children in hospitals (kids get a medal of honour afterwards!), and sending aid workers to those in need. Now, as a registered foundation, they can do their own fundraising and give back even more, says Suzana Bulhoes, who has been working there for years and was on the ground in Haiti as part of relief efforts.

From good deeds to dashing men in uniform to ladies looking lovely in vintage ensembles, the afternoon was a great trip. Finding the uniforms for the show was something of a challenge. Isabelle Arthur, Manager of Media Relations and Foundation, told us how they salvaged the looks with months of research. “Our team, with pictures, and historical films, put everything together and brought it to a designer in Montreal, and she recreated everything.”  Add to the retrospective an opportunity to climb on board a Boeing Dream Jet, which looks more like a lounge than an airplane, and has wheels that come up to my ribcage, and you’ve got yourself a HIGH-FLYING AFTERNOON! Okay, sorry, just look at the gallery of these awesome uniforms.

The very first uniform was picked off the rack from the Hudson’s Bay Company by Air Canada’s first stewardess. She’s still alive, at 102! Back then, flight attendants also had to be trained nurses.

This bag, from the 50s, was borrowed from an actual Air Canada attendant for the fashion show! She remembers being told to place it precisely halfway up her forearm.

In the 70s, Canadian designer Leo Chevalier created a mix-and-match look that allowed attendants to play with separates.

The first Air Canada flight was on this baby, and it’s still in operation. Take us to the forest?

AC7: Inside the Dream Liner!