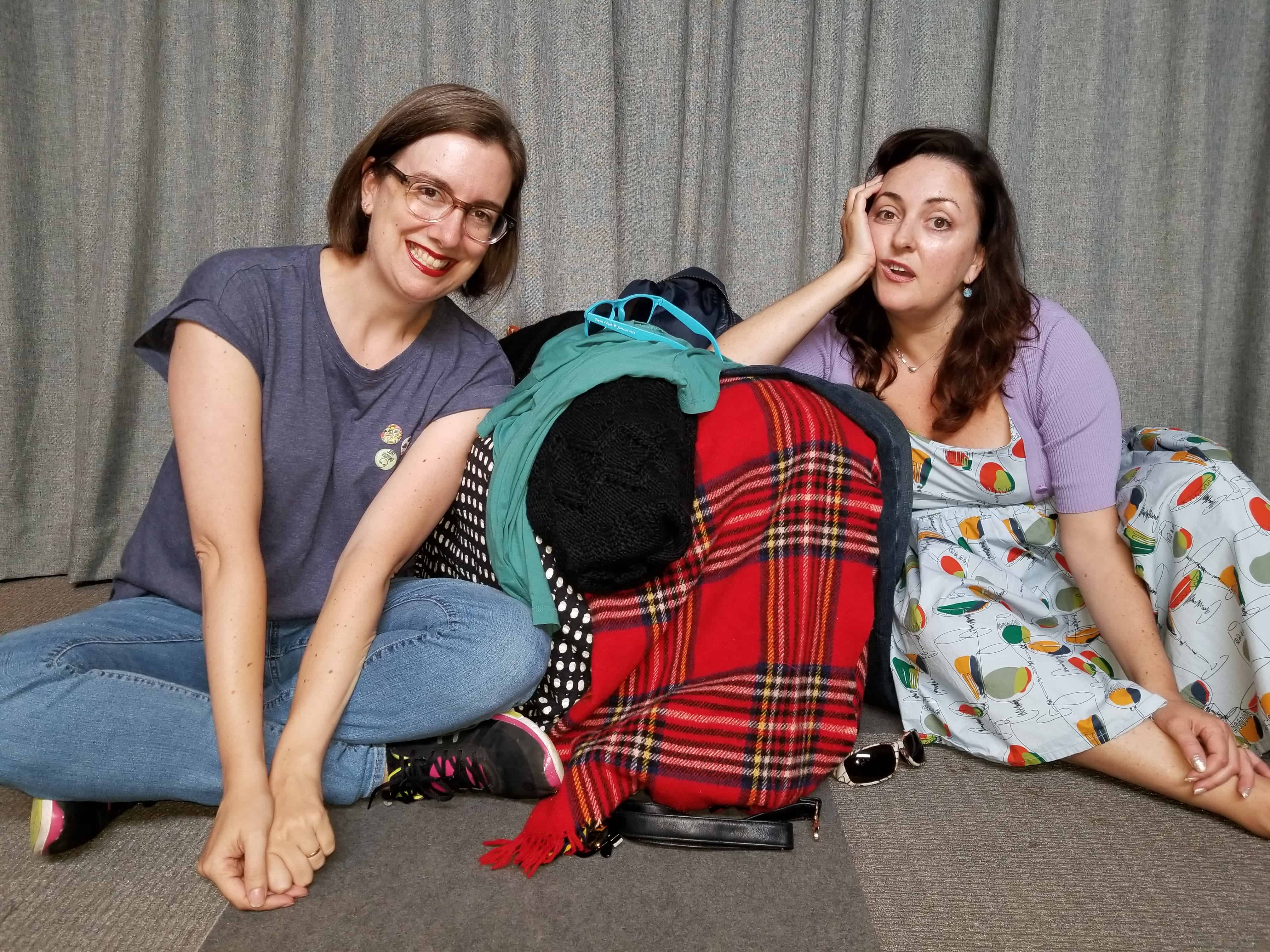 Amanda Barker and Dale Boyer are the creators of Clotheswap, an inclusive, interactive, and body-positive theatre experience that takes place (fittingly) in the Canadian Textile Museum as part of this year’s Fringe.

The show explores women’s stories through the clothes in our closets: the trends that have enslaved us, the weird accoutrements to our changing bodies, the price of fast fashion, and the connections we make with each other. In addition to being a performance, Clotheswap is also an actual clothes swap where you can bring in your clothes to swap or donate to Sistering and Dress For Success.

We chatted with Amanda and Dale about the show this week.

SDTC: How did Clotheswap take shape?

AB: Dale and I have known each other…let me do the math…fifteen years now. We were in the cast of Tony n’ Tina’s Wedding at The Second City, and Dale was one of the first people to talk to me in that huge cast. We’ve always been close throughout the ever changing tide of both our careers as writers and performers and actually, Dale was the first one to tell me about the idea of a clothing swap and hosted the first one I ever went to fifteen years ago. I’ll never forget going home with all of her jeans that day! In fact, most of my jeans are her old jeans, even today. Really, the seeds and ideas of this show began in 2015. Dale was in her first year of motherhood, and I had just ended three years on tour.

DB: After commercial theatrical success for both of us (and one too many Walmart commercials), time felt precious and our own stories felt underserved. We wanted to do whatever we wanted, and this is what we wanted to do. We went to Amanda’s cottage for a few freezing days and just wrote and wrote. We then became very strategic with assembling our cast and crew, made entirely of women.

A: We wanted moms and not moms. We wanted women who were versed in improv and comedy but also could handle weighty material. It’s a tall order, but we got lucky because our whole team is so incredible. This city is spoiled for talented female-identifying performers and storytellers. We could have assembled twenty casts, honestly.

How is clothing a great lead-in for conversations about bodies, current events and women’s rights?

A: Our goal is truly to examine the seams of empathy among women. I’m not afraid to keep using this metaphor because threads and fabric really do exemplify the bonds between women. We really wanted to explore: What stage of life does each sweater or pair of harem pants symbolize? What stories do over-worn socks or under-worn stilettos tell? We wanted to investigate the stories told through our bodies, ways we frame our self-image, and the language we use throughout. I think the show does just that. Most women I know have gone to one or want to! We have all heard how women talk to themselves in front of a mirror when trying tops on and how other women help them with decisions of what to keep and why. Also, we are personally very interested in exploring the high cost of fast fashion, and we know statistically that women spent 76% more on clothing than men do and 75% of the labour in the global garment manufacturing supply chain are women. So the story of clothing in the last 100 years is largely a women’s story. And that’s a story worth telling.

Is the performance entirely improv? Or are there sketch elements also?

A: Neither! It is a play with character arcs and all the elements you would expect of narrative structure. What makes it unique is that we have woven (see what I did there?!) moments for improv and play throughout the piece.

D: I will say, I don’t think I’ve ever seen a play with a structured improvised costume design – our designer Vanessa Wishart has worked in huge theatres, in fashion and with RuPaul. She’s a true boss and integral to our process.

What has been your fave scene that has come out of this?

A: One of my favourite lines is “Isn’t detox just a woke word for diet”?

D: The fact that Amanda and I laughed for fifteen minutes at the phrase “criss-crotch legs” when describing a character with criss-cross tights brings a smile to my face Every. Single. Time.

A: Let’s get #crisscrotch trending please and thanks.

What can audiences expect?

A: Audiences can expect five strong women on stage. They can expect to laugh and also be challenged. They can expect to explore a museum that they might not have even known existed in Toronto. The Textile Museum is giving all audience members free admission, and if you haven’t explored this museum, this show gives you the perfect opportunity.

D: You can expect to be surprised by how we talk about episiotomy scars.

A: And also, you can expect to leave with new clothes! But hopefully no new scars.

Anything else you want to add?

D: Those antique tea cups you might be saving are likely not worth anything. Just use them because who really gives a fuck? Just wear your clothes and live your life.

A: I went to an auction in Florida a few weeks ago, where retirees bring their valuables in their final years. An hour there, watching a set of Royal Doulton go for twenty bucks, and you’ll be less motivated to hang onto the stuff that someone is telling you “could be worth something.” The truth is we’ve been working on this for four years and a lot has changed in that time which to be honest, makes the themes all the stronger.

D: Case in point: Marie Kondo has been around for a while but with her Netflix series this winter, everyone was motivated to purge and simplify their life.

A: Totally, and that’s great. Who doesn’t want to simplify their life in some way? But I think sometimes people think that donating is just some magical land of people who can’t wait to take your shitty T-shirts. Did you know that 86% of your purged, donated clothing ends up in a landfill overseas? Those shitty T-shirts that well-meaning people donate are responsible for the collapse of the textile industry in Kenya. And that’s if they get re-sold. Most go into a landfill, over there or elsewhere. So…maybe…stop buying those shitty T-shirts. Or wear them more. I’m not giving up my tea cup collection though. So don’t make me, Dale.