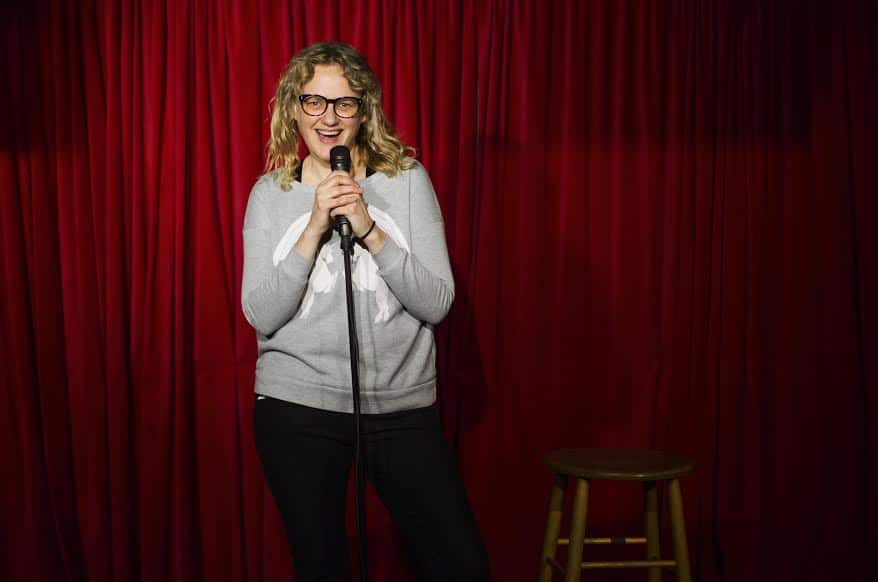 AN INTERVIEW WITH COMEDIAN DAWN WHITWELL

Dawn Whitwell is my hero. She taught me the art of stand-up comedy four years ago and continues to inspire me. Honestly, there’s a lot to be inspired by: she teaches an all-female stand-up class called Comedy Girl. She just did a gala taping at Just for Laughs in Montreal. She is about to do an hour at JFL42 on September 25th. She hosts an amazing weekly show called Dawn Patrol every Monday night at Comedy Bar, which starts up again on September 14th. She just wrote on a new all-female sketch comedy TV show. Plus, she’s absolutely amazing at colouring.

This woman is a powerhouse of non-stop creativity. It makes me so happy that she’s had such an incredible year and I wanted to hear more about it. So I sat down with her for an hour of bliss and we chatted about her current successes, her previous struggles, and how comedy brings her more joy than anything else.

Jess Beaulieu: So, firstly, when did you start doing stand-up comedy, and what drove you to it?

Dawn Whitwell: I did my very first set on April 27, 1997. I was a pretty hardcore improviser at the time and all of my improv friends started doing stand-up during this comedy boom. They were always asking me when I was going to try it. One day I wanted to give my friend Matt Watts a joke to use and he was like, “Why don’t YOU just do it?” So I did.

DW: I loved it. I would say that I never looked back at improv after that. Stand-up was more my thing and I didn’t even know until I tried it.

JB: Why was it more your thing?

DW: I think it’s the control and the writing. There’s so much more self-expression, too. I’m not trying to fit my perspective into someone else’s premise. At that time I really wanted to intensify my own point of view on stage.

JB: Why did you get into comedy in general? What did you do before that?

DW: I was working as a research clerk at a university. I was planning to go back to school to study statistics, but before I went back, I wanted to do something fun, so I took a class at Second City. And as I was driving back to Hamilton the night after my first class I remember thinking, “I’m going to do this.” I let my contract run out and totally switched my focus in life. I was nervous because I wondered if it was too late at 25 to change my mind. But then my doctor said to me, “You’re a spring chicken. Do whatever you want. It’s your life.” So I did.

JB: What changes have you noticed between the climate of comedy today and when you started?

DW: There were fewer female and gay comedians back then. The late 90s was a different time. It was different to be a woman. It was different to be gay. I wasn’t even out when I started stand-up. There’s so much more room now for every type of comedian to truly be themselves. I remember not seeing myself anywhere. But, now anyone who wants to try stand-up can find his or her own space.

JB: Talking about finding your own space, how did your all-female stand-up class Comedy Girl begin?

DW: I used to teach a coed class at Second City and after that ended I moved down the street from Comedy Bar, which had recently opened. I had wanted to do an all-female class for a while and I really liked Gary Rideout, the owner, so I talked to him about it and he was very supportive.

JB: What differences do you notice between the co-ed class and Comedy Girl?

DW: With an all-female class you notice right away that they’re all being themselves. They’re not censoring as much. They’re still censoring a bit because as women we’re conditioned to censor ourselves but it’s more relaxed and encouraging. They bring out the best in each other. It’s not competitive.

I wanted to up the numbers of girls in the community so that was part of the reason why I started the classes. I also want to make comedians I’m interested in seeing. I frequently listen to smart women who work in other disciplines and I think, “I would love to hear you do stand-up.” Teaching the class is a unique way to get to know people. I’m getting to know them through what they find funniest about life.

JB: What’s your process for writing a joke?

DW: First and foremost, paying attention to when I think of it. Writing it down is so important for me, or else it’s gone. Then when I look at it later, if I still find it funny, that’s a good sign. I figure it out with a freestyle, timed writing. Especially if it’s just an idea and I’m not sure what it is about the idea that I want to express. Then I try it on stage. Sometimes I’ll come at it from another angle and research a subject I’m interested in exploring. Then I’ll base a joke on facts instead of something personal.

JB: Right. You do seem to talk about your life more than anything else.

DW: I do. I also talk about not getting life. After 18 years or so of doing this, I’ve managed to train myself to figure life out this way. By bouncing it off other people. I think that’s what a lot of comedians are doing.

JB: I remember when I took your class four years ago, one of the first exercises you had us do was a freestyle, timed writing where we told a real-life story that happened to us recently that we thought was funny, which I think is a great way to write a joke. Having it start from a simple, honest place.

DW: Yeah, I often respond to those stories by asking, “So, what REALLY happened? What did they REALLY say?” Life is pretty interesting on its own. I get why students reach for a jokey style at first because that’s what they think stand-up comedy is, but an audience knows when they stop believing you. As an audience member I like seeing a comedian who really lets us into their life. It’s not all output for me. It’s letting in too.

JB: So, you just came back from Just for Laughs in Montreal and in a few weeks you’re performing on JFL42 in Toronto. How are you preparing for the upcoming show?

DW: Well, it’s an hour of me, so I’m practicing by putting up as much new stuff as I can and seeing what I can keep from that. Then at the end of September I’ll sew it all together.

JB: And how has that been? Writing tons of new material? Has it gotten easier?

DW: It gets easier when you do it more. Frequency has so much to do with it. I’m not as tortured about stand-up as I used to be. I know it will come when I call it. I think of it as a friend. Not something I need to wrestle.

I used to think, “This is who I am… but only if it goes well.” I feel more security about it now. I think when you’re younger, you have a lot of expectations and those expectations are rigid. You have milestones you want to hit by a certain time and if you don’t hit them, you have to decide whether or not you’re still doing this. If you decide you are still doing this you’ll be a lot more settled.

JB: Yeah. I definitely feel more secure as a comedian than I used to as well and way more confident, which is such a big part of stand-up – being confident in who you are and knowing you got this.

DW: Yes. You need to ask yourself, “Am I taking care of the audience or are they taking care of me?” because it’s such a fine line. But, if they’re taking care of you, it switches from them being on a ride to managing the ride. Someone told me once that when people are worried about you, they can’t laugh. I think it’s true.

JB: What have been some of your biggest struggles in comedy and how did you overcome them?

DW: I’ve almost quit a couple of times. There were moments when I had to decide if I was going to keep doing this. It came down to the fact that, firstly, I’ve been basically fired from all of my other jobs. But, also, my greatest happiness comes from thinking of that new bit. The bit that I write down in my notes as just an idea but I can see everywhere I’m going to take it. I remember when I was considering quitting, I thought, “Well, if I’m just doing it for this very small reason, for loving that new bit, and for that reason alone, I’m going to trust that,” and I did.

JB: What have been some of your greatest triumphs?

JB: Ah, Dawn! That’s so nice. I never know what to say when nice things like that are said about me. I don’t believe it’s true!

DW: Yeah, or you defer it, right? Somebody tells you that you crushed a set and you say, “The audience was amazing.” I do it all the time. It’s not that you think you don’t deserve it. You just couldn’t imagine it.

I recently found a timed writing I did from five years ago. It was about the summer of 2015 and I had written “Just for Laughs Taping.” THAT was a great triumph for me. Also, being on the cover of Pride Guide was amazing and when I did a set at my show Homo Night in Canada, I received so much applause from the audience when I walked out that I had to wait to start my set.

JB: How about that Globe and Mail piece about Comedy Girl?

DW: Yeah. I have four full classes in September.

JB: You also wrote on the soon-to-be launched television show Baroness Von Sketch Show this year. What was that experience like?

DW: It was brilliant and encouraging and it truly brought out the best in everybody. It taught me so much that I’m still realizing everything that I learned in that room. It was challenging and different from how I’m used to working because it was collaborative. I felt vulnerable not having all of the pieces to the puzzle and having to ask other people for the pieces. It was liberating knowing that I only needed one part.

JB: What would you like to do that you haven’t done yet?

DW: The show that I’ve always dreamed of doing: My hour. I know what it looks like and it’s really fucking good.

JB: What advice would you give any woman trying to break into comedy?

DW: Pay attention to what’s making you laugh and what you care about and listen to that.

DW: Yeah and take my classssssss!