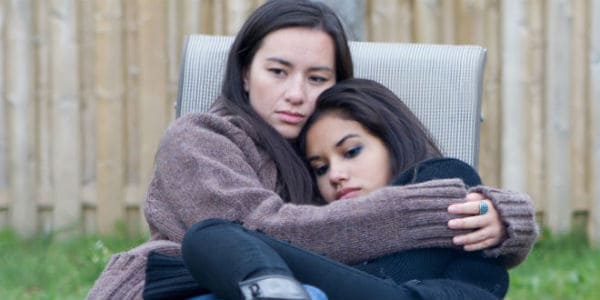 An Interview with Jennifer Podemski, Producer of Empire of Dirt

Addiction, teen pregnancy, depression, and unemployment are indiscriminate issues that affect many Canadians, but the statistics are especially disturbing within the Native Canadian population. Why? There isn’t one easy answer.

To even begin to understand this problem requires a close and honest examination of our collective history. Jennifer Podemski, producer of Empire of Dirt, summarizes the ugly and complex predicament well, “It has everything to do with shame.”

The film follows Lena (Cara Gee) a young mom who is a crack addict in recovery, trying to raise her teen daughter Peeka (Shay Eyre) in downtown Toronto on a low, and unreliable, income. Like her mother, Lena ran away from home as a pregnant teen. Through a series of unfortunate events, and with only one place to turn for help, she’s forced to return home with Peeka and reconcile the tumultuous past with her mother, Minerva (played by Podemski.)

Empire of Dirt took eight years to make; it is, to date, the only feature length film about a multi-generational family of Native Canadian women. “That’s what kept me going, “ says Podemski, who is half Ojibiwe, “I have a daughter now and, not to say it won’t happen again but if there’s just one movie that looks like her, that she can relate to…it had to be done, regardless of budget or where it goes.”

Uncomfortable and hard-hitting, the story reveals what modern day life is like for so many Native Canadian women. Although it doesn’t dig at the reasons why destructive behavioural patterns are often repeated in each generation, it does encourage tough questions.

When I push for answers from Podemski she reminds me that most of her peers are first generation residential school survivors. As Canadians, we forget that this atrocity, when young children were removed from their homes and placed into what were often abusive situations with an objective of erasing their inherent cultural identities, happened not long ago. “That trauma is still very much alive,” she says, “And what do people do to forget? They drink or rage in some way.”

So, how do we fix this? Again, there’s no straightforward answer but Podemski offers hope, “Reclamation of culture and language is a huge part of the healing process. Whether it’s language or music, you have to have a foundation for healing. It could be a youth group, women’s group, men’s group or native centre but ultimately, you need to be given the freedom to express your pain.”

Everyone knows that Canada wasn’t formed over friendship bracelets. There is no quick fix; Empire of Dirt reminds us of this.

Empire of Dirt is in theatres now.