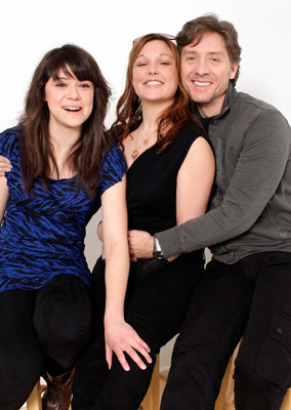 An Interview with Adriana Maggs, Writer and Director of Grown Up Movie Star

Adriana Maggs’ amazing film, Grown Up Movie Star, has taken Sundance by storm. Compelling young lead Tatiana Maslany was awarded a Special Jury Prize for her performance as Ruby in the piece, which takes place in Maggs’ native Newfoundland. The stunning scenery provides a backdrop for a wrenching tale of love, sexual awakening, and family dynamics. Big Love’s Shawn Doyle plays Ray, Ruby’s handsome father, a one-time NHL player disgraced early in his career for smuggling pot over the border. After his wife abandons their family, Ray must face the difficulties of raising on his own the daughters from whom his own shame and secrets have kept him isolated. As Ray comes to terms with his homosexuality, Ruby pushes the boundaries of her own identity. These two sexual awakenings parallel each other in a film that is a triumph of storytelling and cinematic language. We sat down with the sassy and gorgeous writer and director Adriana Maggs to talk about her moving film, her love of Newfoundland, and why she’s never working out on a Wii again.

The film weaves together such a complex storyline, seemingly effortlessly. This is the mark of a truly talented director. “I just say this mom leaves, and then the dad and the daughter have these sexual awakenings, and they just spiral out of control because they’re not accepting each other.”

The film covers some truly controversial territory. Homosexual affairs, rape, child pornography. Maggs laughs about taking that Molotov cocktail to Utah. “Shawn Doyle is on that show Big Love, where he plays a polygamist. I’m like, You can’t go to Utah! They’re gonna lynch you!” She says. “I knew I wasn’t making a movie that everyone was going to love. The family whose house we shot in was pissed. They saw it in the Women’s Film Festival and wrote into the Telegram that it was disgusting. But it’s totally fine because you know what? People don’t always want to talk about the things that that movie is about. They were older, and some people just love that stuff to stay hidden. I understand that. Me personally, I think that we heal from talking about it, and laughing about it.”

We asked her how she handled creating characters who were so complex-some acting in a way that feels almost unforgivable. “By deciding that people were flawed but nobody was bad,” she explains. “I just wanted to understand why everybody was making the decisions that they were making. I think tragedy can happen when certain people get in to certain situations even if none of them are bad.” When talking about how she drew such moving performances from her cast, she says “I’m actually close friends with most of the cast and crew. So I think, from the beginning, the members of the cast that I didn’t know as well could see that we were all a very loving and trusting family. It’s just a beautiful set and very respectful. There was so much love. I know that Tatiana and Shawn found a home in Newfoundland. Shawn is from Newfoundland and needed to get back there, and Tatiana was so loved and welcome. She was amazing, and so I hope that everyone created a safe space for her. The grips who were watching [the most difficult scenes], that must have been a really hard thing to do, but they were respectful and loving, everybody was.” Tatiana is truly a tour de force. Maggs was blown away by her performance. “She deserves to be so excited, man, she’s amazing. I am so lucky to have her,” she says.

The result of those powerful performances is a film that rings with incredible truth. We asked Adriana how much of the film was drawn from her own childhood. “Some of the conversations are verbatim,” she says. “I think that it started out as fairly honest, but it’s amazing how much film is a collaboration. People ask, “Is Ruby you?” No, she is Tatiana. I don’t want to be like James Frey and get hauled up on Oprah, I’m not going to get hauled up on She Does The City. I think that I never worry about really honest stuff, because by the time it gets to the screen, it’s totally changed. No secret is safe with me.” Referring to one of the funniest moments in the film, she says, “Once I came home and the father of my child was pretending he wasn’t smoking. He had Autotrader over the cigarette and it did catch fire, it was hilarious. Amazing amounts of stuff are true, but as an overall story it’s definitely not an autobiography. And I do think we’re kind of obsessed with wanting to know people’s true stories, and the absolute truth is you can’t really. I would never sacrifice an awesome story moment to stay close to the truth. Life doesn’t happen in climaxes, as much as we want it to.”

Directing a piece that’s so close to you can be a challenge, but Adriana says she prefers working with her own material. “If i hadn’t written it, I probably would have folded. This is way better. Because I can answer all the questions.”

As much as any of the actors, the place plays a part in this film. Even though Adriana and her children now live in Toronto, Newfoundland is still home. “That place is the most inspirational place in the world,” Adriana says of her home province. “I was hiking up Signal Hill with my girlfriend, and realizing ‘I’m never working out on the fucking Wii again, it’s soulless.’ I need to be home and I need to be walking. You would not believe the drop into the ocean, and there’s no railings, you know what i mean? I really have to go back there and recharge.” The people of Newfoundland have also embraced Adriana’s film, and she’s thrilled. “I had the most beautiful screening there. I’m really happy.”