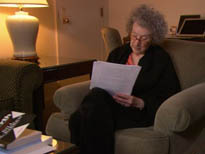 An interview with author Margaret Atwood and filmmaker Jennifer Baichwal about Payback: Debt and the Shadow Side of Wealth, opening March 16th

In Payback, Jennifer Baichwal’s documentary based on a series of Massey Lectures by Margaret Atwood, an Albanian man sits on a couch in a sparse room, lifting his black t-shirt. He reveals a series of deep indentations in the flesh of his torso. The indentations are scars from bullet wounds incurred when he and a neighbour argued over the ownership of some land. Based on Kanun law that goes back hundreds of years, the Blood Feud means the injured man has the right to restrict his neighbour and family to their own property, unable to leave for work or school.

This is just the beginning of a series of fascinating meditations on debt—a concept that goes far beyond the banks. It’s an idea that, according to Atwood, is historically widespread, from Ancient Egypt to modern-day ethics. “Sooner or later the bill comes due,” she says. “Sometimes it’s the karmic wheel, sometimes it’s the various illusionary Buddhist hells, but there’s always somebody keeping score, and you’re going to have to ante up at the end of the game.”

The game may be personal—one man’s injuries from another man’s gun—or it may have a far grander affect. Rendering large-scale devastation is nothing new to filmmaker Jennifer Baichwal, whose resume includes the Edward Burtynsky documentary Manufactured Landscapes. When she first sat down with Atwood’s published lectures, she didn’t know where to begin, but after reading the piece, she says she was completely hooked. “The ideas, the complexity,” Baichwal explains. “Once I read it, I thought, this is amazing. A, I’m completely intimidated at the thought of trying to adapt a Margaret Atwood book, and B, is it even possible to make it into a film?”

Baichwal spent a year deciding how to translate Atwood’s ideas onto the screen, and eventually realized she had to manifest the philosophical concepts with a series of real stories on several scales. The result is a film that explores not just personal debt, but environmental and cultural debt as well. Atwood and Baichwal sat down at a kitchen table to go over the story ideas, and then Baichwal got to work. It’s not surprising, given both women are so invested in climate and environmental issues, that the film was produced carbon-neutrally, and explores one of the most visually arresting environmental disasters of the last twenty years: The Gulf oil spill. “Atwood has that line, ‘What if a debt cannot be repaid with money,'” Baichwal explains. “If there was ever a debt that cannot be repaid with money, it’s that one. We have no language to discuss that kind of scale of environmental disaster.”

This statement, however, does not do credit to Baichwal’s mastery of cinematic language. As flames billow over the black ocean, Baichwal cuts to a Louisiana native sitting on his boat. “We’re used to disasters here,” he says with a drawl.”Not dreaming it was going to be as bad as it got.”

“Let’s not call them environmental issues,” says Atwood. “Let’s call them your water, your air, and your food.” In the film, all that ground is covered, from watching BP irreversibly corrupt an ecosystem to exposing injustice in the tomato fields of Florida, where legions of workers are exploited, and even enslaved, to provide produce. These examples are interspersed with footage from Atwood’s original Massey lectures. “If you think of the stories as beads,” Atwood says, “The lectures are the string, the phrases that open up the window, and we walk through the window, and see what she’s going to show us.”

Baichwal shows us a remarkably arresting execution of Atwood’s meditation on debt and repayment. We hear ex-prisoners explain the mental debt of addiction, and extrapolate that to the societal debt of criminal behaviour. We hear academics, economists, and even Conrad Black weigh in on our cultural relationship with debt. Baichwal takes Atwood’s academic concepts and makes them visceral. “The whole point is to change consciousness,” Baichwal says. “It’s rare to have a place for sustained reflection in our society these days. So when you do an act of contemplating ideas that are more elliptical than linear, that raise questions instead of answering them, I think that’s valuable in and of itself.”

Payback: Debt and the Shadow Side of Wealth opens March 16th

Images courtesy of the NFB