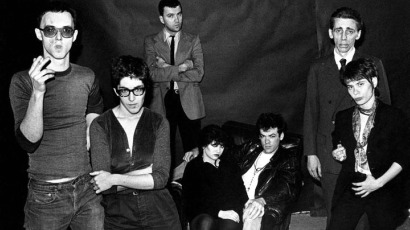 An Interview with Celine Dahnier, Director of Blank City

“I think in some ways the surprising part was that Blank City was able to be made at all. It proved to me that my initial idea, my initial feeling about New York – that anything was possible, was right on the mark.”

Celine Dahnier’s fantastic film chronicles the No Wave film movement in New York’s East Village in the mid-70s. Talking to the likes of Jim Jarmusch, Sonic Youth, Lydia Lunch, and Steve Buscemi, the doc pays homage to the movement that created what would come to be known as independent film.

What prompted you to make this film?
I was living in Paris and I went to see a “No Wave” film retrospective at Beaubourg. I knew of the no wave music scene and I loved bands like the Contortions or Lizzy Mercier Descloux but I wasn’t really aware of the underground movies made in New York during that period. I was really intrigued by what I saw and I loved how the energy of the films reminded me of the music I knew. The films just had rawness and a brutal sincerity that I loved.

Soon after, I moved to New York and quickly met Aviva Wishnow (producer) and Vanessa Roworth (producer and editor) and together we started working on Blank City. Our idea was to make a film in the style of Legs McNeil’s book “Please Kill Me:” to let the story unfold through the interviews and anecdotes in the own words of the people who lived it.

In New York, I continued tracking down these filmmakers. Some I knew through their current work were living in New York like Jim Jarmusch, Amos Poe and Richard Kern. Others I tracked down in LA like Patti Astor and Michael Oblowitz and others from Europe or other areas. It was great because one interview would lead to another and to another by word of mouth. So we shot for 1 year and a half and it was an amazing experience to be able to find so many of the filmmakers and speak with them about this exciting moment of filmmaking in NY.

For young filmmakers, what do you think is exceptionally inspiring about this time in cinema?
New York city in the 70s was bankrupt, dangerous and very run down. A lot of areas were just completely empty and abandoned and you had a lot of freedom to shoot wherever you wanted. There was the struggle to survive and out of that came an energy to create, to fill that empty space. New York was like a blank city or a blank canvas.

People who did move to downtown NY at that time seemed to have a common purpose or at least a similar attitude. Everybody wanted to tap into this urgency to create and to find unique ways of voicing their presence. It was truly that Do It Yourself spirit and part of the idea was to do something “new” and “different”. To break with the past, so to speak. This opened the door for the overlapping of artforms and for collaboration. Film was a perfect medium to encapsulate all of that. The no wave films were done fast and loose, with little or no budget by a small community who worked as filmmakers, actors, artists, musicians, and writers all mixed up into one.

I think it was a very unique moment, that period in NY, and I think when you watch these movies you can really feel that raw energy. For me as a filmmaker, that was inspiring. That is definitely what I hope filmmakers today can take from Blank City and from these films. That idea that if you are passionate and want to make a film, you can find a way to just do it. You don’t have to have a lot of money or a big crew. You don’t have to follow the system. You can create your own. Just pick up a camera, grab some friends and make it happen. Blank City was also created in this same spirit.

Although you are from France, how did making this film help you discover or perhaps re- perhaps re-discover NYC?
In researching for the film I learned a great deal about the city and particularly the downtown scene of this period. There are so many great artists, writers and musicians who got their start in the East Village of the 1970s/80s – Basquiat, Jim Jarmusch, Steve Buscemi, Cindy Sherman, Nan Goldin, even Madonna. So many new movements in art and music like Punk and Hip-Hop came out of that scene. It led me to thinking about how it all would not have been possible if the city had not been the way it was and had not had the history it had like Warhol’s factory or the Beats for example.

But I do think New York is still a “Hot bed” for the art scene and you still have this incredible energy. I think NY today is more diverse then ever and more global. You can meet a lot of different people from all over the world and that is great for collaborating and sharing ideas. I moved to NY because I still had the feeling that everything was possible here. Even though it might be much harder to make a living as an artist or a filmmaker, if you work hard you can find a way.

Jim Jarmusch speaks in Blank City about New York always being a city for thieves and hustlers and I agree. I think that it will probably always be true. You have to hustle a little but that’s part of the creative energy that makes the culture of NY what it is.

In your opinion, what is the emerging art scene in NYC now?
You have a lot of musicians and artists who are still leaving in NYC, Terrence Koh, Ryan Mcginley, Agathe Snow, Aurel Schmidt….NY is still in many ways the center of the art world. You have great museums here of course and galleries. The boundaries of the New York art scene have been pushed out and you find lots of new young creative people in the far reaches of Brooklyn, Queens or the Bronx.

I think many of those ideas from the arts scene of the 70s/80s had a big influence on today. There are still small store-front galleries, loft spaces and basements around the city and especially out in Brooklyn or Queens where you can see new art, hear new music, see new films. Because it is so expensive now you also have new types of collectives of filmmakers or animators or musicians who are pooling their resources to get studio spaces and work on projects. I don’t know that you can define the art scene by any one thing but perhaps to say that it is still very varied and diverse but today it is perhaps more tied up with the economic factors of the city.

What surprised you most during the making of Blank City?
I will begin by saying that I was surprised and really happy of being able to interview so many people – almost 40 people. Everybody said yes! I never thought I would be able to find so many people from the scene and get them all to be involved. I was surprised too by some of the great collaborators I found to work with like Aviva Wishnow (who produced Blank City and was really a co conspirator) and Vanessa Roworth (who is a very gifted artist, musician and editor), Ryo Murakami and Peter Szollosi our great DPs and also Dan Selzer, the music supervisor on Blank City who helped introduce us to even more music from the period. We were also fortunate to collaborate with Nicholas Ray and Walter Steding for the soundtrack of the film.

Also in the beginning I really wasn’t sure I would be able to make a film at all, not having the technical background and also with my strong French accent and limited English. From the start we had no money, no kind of budget and were all working full time jobs to get by. Always there were new challenges to be met whether it was finding locations, securing a camera or mic, having the computer hard drive crash…etc etc. I think in some ways the surprising part was that Blank City was able to be made at all.

It proved to me that my initial idea, my initial feeling about New York – that anything was possible, was right on the mark.

Being your first documentary, what key learnings did you take away that you would pass on to others?
When we started we didn’t have any production company behind the film. There was one American Express card and a lot of determination while also working full time jobs.

Right now, it’s really difficult to make a movie. This was something I learned. It gets harder and harder to make independent films. There were a lot of ups and downs but the result makes it worth it…you just need to be determined, strong and focused. When things aren’t working or there is a bad day, you have to just keep going.

If I was a nostalgic person I will say that I don’t like the East Village now, but I like to try to live in the present. I do think some of the uniqueness is gone. That feeling of being on the edge of something is gone. But that’s not just for the East Village but Manhattan in general.

For me, I didn’t get to live in the East Village of the late 70s…but do I like it now? Of course! New York is an amazing and always shifting city. I think the East Village as a neighborhood is a reflection of that. I live now in downtown Manhattan and I think even as a foreigner, I can say New York is my home. It still is a city where anything is possible.

Blank City screens Saturday, May 8th at Cumberland 2 at 9:45 pm