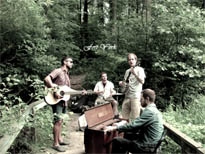 An interview with Conor Lavelle, vocalist/guitarist from Toronto band Fort York, who are crowd-funding to make their second record a reality

Amidst the streetcar clangs, unrelenting cab honks and herds of pedestrians, it’s hard to imagine a band like Fort York could spawn from Toronto’s downtown centre. Listening to the folksy rockers musters up images of dreamy backcountry road trips and orange sunsets flickering through the car window. But however Canadiana-country they sound, vocalist/guitarist Conor Lavelle speaks highly about the Toronto music community and how being a part of the urban scene has helped them start something big.

“A lot of people in the Toronto music community really helped to get things going for us, even as far as getting live shows.” Lavelle mentions a bartender from Parkdale’s Not My Dog, who offered a weekly residency to the band after hearing them jam once. Pretty soon, people were coming out each week to see Fort York play, as the band fine-tuned their performing chops. “Personally, I do love playing music in Toronto, and the vibe that I get there from the community is pretty unique.”

The group – consisting of Lavelle, his brother Rory Lavelle, Kyle Fulton, Dan Lefebvre and Nick Kewin – were childhood friends who all met through summer camp Wanakita. Lavelle and Fulton would simply play around campfires and family members. After a tree-planting excursion in 2009, they started toying with the idea of actually getting a band together – it wasn’t until the summer after that Fort York was finally formed. “It all kind of came together the summer of 2010… that happened to be the summer we were all around and able to make the commitment.”

The result was a very solid eight-track EP entitled Feels Like Then. Songs like the Elliott Smith-tinged “Sin Badly” or the banjo-sprinkled “Mary” are literally a breath of fresh air, taking you beyond the noise-polluted city at least for a moment. Bands like Rural Alberta Advantage and Cuff the Duke come to mind with the intricate vocal harmonies of Local Natives. Close to a year after the debut album’s release – which itself took over two years to get out, with a strong community effort supported by family and friends – Fort York is ready for their follow-up album and they’ve turned to crowd-funding to help make that happen.

Through popular funding website Indiegogo, the members of Fort York have launched their Sacrifice Campaign in an effort to get their name out and produce the best version of their songs. “The idea for the campaign stems from our experiences from the first album. The first album was only really possible because of our friends’ belief in it, whether it was getting cheap studio time or discounted mastering or whatever the case may be. We called in favours and that helped a lot. But then we found that at a couple of shows we played early on, there were strangers that were willing to help out,” he says. The huge positive response the band has received from audience members in the past drove Lavelle and his bandmates to look into sites like Indiegogo for some extra financial help. “This approach was in keeping with our previous experiences at shows where people were donating out of voluntary basis into a hat at a bar and we just kind of liked that vibe of support. We thought, ‘Well, let’s make it available to more people.’”

If you’ve ever donated to an Indiegogo or Kickstarter campaign, you know about the perks to contributing a certain amount towards the project. In Fort York’s case, $5 gets you a pre-release of their EP, $20 an advance copy and a ticket to their end of summer concert at Dakota Tavern on August 29 and $100 will give you “The Works.” One lucky gentleman donated $300 and got an intimate backyard performance from Fort York for his wedding anniversary. “It was really fun,” Lavelle adds. “He had snacks out and a couple coolers of beer and he invited a bunch of friends from around the neighbourhood. We played an acoustic set in his backyard and it went really well – we like getting involved in that sort of thing.” The banjo had us at hello.

If you’d like to check out Fort York and donate towards their campaign, visit Indiegogo for more details.