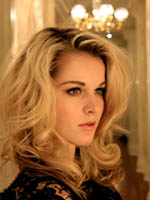 An interview with local singer-songwriter Ashleigh Semkiw, who dazzled us on Saturday at The Great Hall

Ashleigh Semkiw is a local singer, songwriter, musician, and operatic soprano who held her EP release at The Great Hall this past Saturday. The venue was packed full of family, friends, and fans, and for good reason: this woman can sing!

Performing alongside her band of 10 (which included violinists, a bassoonist, and a cellist!), Ashleigh sang songs off her new EP, which is a mix of progressive pop, classical, singer/songwriter confessional, and rhythm and blues. (Think Tom Waits meets Kate Bush.) It’s nearly impossible not to be captivated by her vocals; powerful one minute and vulnerable the next. Each one of her songs received cheers from the crowd, but it was her encore of Stevie Wonder’s “Heaven Is 10 Zillion Light Years Away” that really blew me away. There’s very few who can cover a legend’s song and make it their own, but she did.

Though Ashleigh’s new EP has the singer taking a new direction musically, she is still committed to her opera career, and will be heading to Chicago in April to sing the role of  “Vava” in Shostakovich’s “Moscow Cherymoushki.”

I met with Ashleigh the day before her EP release at Sam James Coffee Bar to get to know the woman behind the vocals. Here are some basic factoids:

1. Her musical career began after being cast in her high school’s production for the Sound of Music. A retired opera singer was in the audience and approached her mom afterwards about enrolling Ashleigh in opera singing lessons. “I was pretty hooked right away,” says Ashleigh.

2. Her favourite spots in Toronto include Sam James Coffee Bar, Speakeasy Tattoo, Good Fork, the Red Light (1185 Dundas St. W.), Communist’s Daughter (1149 Dundas St. W.), and the Black Hoof (which she declares as one of the best restaurants in the city).

3. Her top three places to include on a fantasy tour would be Chicago, Hong Kong, and Rappahannock County in Virginia. I hadn’t heard of the latter but she told me it’s one of the most beautiful places she’s ever been to.

5. She loves being on stage: “it’s more vulnerable; more exposing.”

Check out Ashleigh Semkiw’s officialwebsite and watch her perform on YouTube.