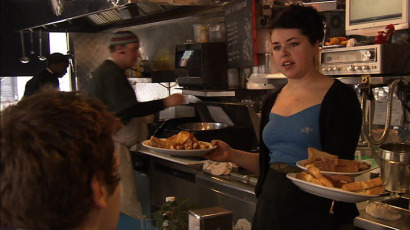 An Interview with Maya Gallus, Director of Dish: Women, Waitressing, & the Art of Service

Dish: Women, Waitressing & the Art of Service is a great film that explores various women in the world of waitressing, from a diner in Belleville to fancy restaurants in Paris, Hooters chicks from Quebec and maids in Japan – or girls dressed like Lolita Little Bo Peeps who address their male clients as Master. What’s it like to work in a Montreal restaurant where serving breakfast naked is part of the job description? What about being a lifer? Maya Gallus explores this industry, which is a ‘rite of passage’ for so many young women.
What prompted you to make this film?
I had been a waitress for many years, and the experience really stayed with me. It’s the kind of job that is easy to pick up, so many women do it as a way to make a quick buck. Waitressing is really a rite of passage for many women. Also, my sister was a waitress for even longer, so I had a deeper sense of what it is to be a waitress in the long haul.

What did you like about it and what did you dislike about working in the service industry?
My first job was as a banquet waitress, and then I worked in a greek pizza parlour, an Austrian restaurant where I had to wear a ridiculous swiss miss uniform, and a funky Queen West restaurant. Mostly I enjoyed waitressing, but it’s hard, hard work, and some people are just very difficult to please or treat you like you’re their personal servant. And you go home smelling like grease or salad dressing or whatever – when I stopped waitressing I couldn’t stand the smell of restaurants for awhile.

Servers portrayed in Quebec were very different than those in Ontario – did you intend to make this a comment on the cultures?
I was intrigued by the sexy resto concept in Quebec, as it’s distinctive from anything else. It is a comment on the culture, in the sense that francophones have a different attitude to the mixing of sexuality and service, for sure. And the naked greasy spoon, that’s just off the wall for most places, so I knew we had to film there as part of the continuum of how female servers are expected to use their sexuality as part of the service. We know of naked female servers, but usually they’re in a bar, serving alcohol – the idea of slinging hash in the nude was just too strange.

Following the making of this film, did your opinions alter on this industry? What surprised you most?
I came away with such great respect for the lifers, the women who had been doing this for years, and it made me realize how bad a waitress I really was, because in order to be good at this profession, and to last, you have to have a specific personality – you have to really, really like people and not get bothered by their demands, not take it personally, just roll with it. And I also realized, through the
interviews in France and Japan, how much pride one can take in serving people well – it doesn’t mean you are lowering yourself by serving someone else, it can actually mean that you are taking pleasure in serving them well.

Do you find any parallels between the women working in the restaurant service industry and women working in the film industry? Challenges that affect both areas?
Both the film industry and the restaurant industry are both male dominated in the high end, where the money can be made, whether it be the world of haute cusine or the bigger budget world of movie making – the glass ceiling exists in both industries, and it’s still a man’s world. And the women who take that on and want to play with ‘the big boys’ so to speak, have to be really strong and tough, and neutralize what are perceived to be traditionally feminine traits.

But the restaurant industry in particular is an extremely sexist, macho industry, and the level of verbal abuse that happens in the kitchens, it’s pretty intense. In my experience, women have more opportunities to break through in filmmaking than they do in the world of haute cuisine – the service industry is slower to change in that respect.

What was the first restaurant/subject you chose to profile and how did you come about deciding on the others?
I always knew I wanted to start with a truck stop, and I found The Ten Acre Truck Stop pretty quickly. I thought Pam was great, and had an interesting story, particularly since her mother was also a waitress, so that led me to her mother at Murray’s Restaurant. And then I followed my nose from there, looking for places or people that could further the story that I wanted to tell, which was specifically about the female experience in the service industry, from low end to high end, from different cultural perspectives.

As a restaurant goer – what behaviour have you witnessed between patrons and servers that irks you the most?
I hate it when I’m in a large group and people just order one thing at a time, or keep ordering things at random, not considering what it’s like for the server to handle a large table. It’s disrespectful to the server. And then, when some people cheap out on the tip, especially when the server has gone the extra mile, that really bothers me.

Where does your empathy stem from?
If something goes wrong with the order, for example the server brings the wrong thing, or the food is overcooked or something, I always hesitate about saying something because I know there’s a whole drama that will go on in the kitchen when the order has to go back. So I cringe when my dining partner sends something back, even if he or she is right, because I’m identifying so much with the server.

Do you have a favourite restaurant? Is it based on the service?
Yes, I love to go to Le Paradis in Toronto – it’s a reasonably priced French restaurant with really tasty food (I think of it as French
comfort food) and excellent service. Plus my partner and I know the staff so it’s familiar and friendly. And I also love going to Lee
Garden in Chinatown because the food is great, and the service is always really good as well. Mostly I choose places based on food and
ambience rather than service, per se, but I have been to a couple of restaurants where, although the food and ambience is great, the
service is awful, and I just won’t go anymore.
Dish Screens Saturday, May 8th at the Royal Cinema at 1:30 pm, and Sunday, May 9th at 5:30 pm at Bloor Cinema