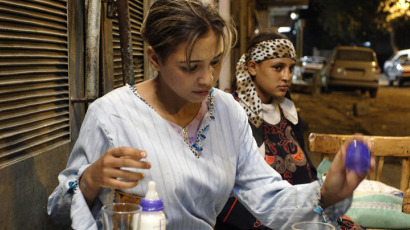 By Haley Cullingham
“These women are the strongest, because they dare to have the dream that life can be different.”
Egyptian-born Tahani Rached grew up in Montreal, and worked with the NFB for 24 years, creating such films as Beirut! Not Enough Death To Go Around, and Au Chic Resto Pop. In 2006, she took to the streets of Cairo to make These Girls, a doc that follows a group of young women who have escaped abusive home lives for the dangerous, drug-riddled streets of Cairo. Tahani’s work is being celebrated with a retrospective at this year’s festival, and we spoke to her about her honest, passionate approach to documentary filmmaking.

The young women captured in These Girls are incredibly charismatic, and their story is very moving. Did you have trouble keeping your distance from the story?
I don’t try to have distance. What I try to do is to create a relationship, so the film is done with the people and with their agreement. I don’t need distance.

How did you connect with the young women in These Girls?
Through Hind, the woman who takes care of them. She worked in an NGO, and I met her over there, and we explained to her the idea of making a film, and stayed with her, and she introduced us to the girls. We stayed with the girls in this NGO for a month, seeing them on and off when they were there. After that one of the girls, Tata, she was supposed to be the main character, now she is one of the characters, agreed to the idea of making the film, so she took us to the street with her.

The girls are very open and honest with you in the film. Were they enthusiastic about the process?
Like Tata said, I want to tell the people what our life is like. This is how she introduced us. Being with them five months before shooting, and then we filmed for a month and a half, we were there for a long period of time, and we’re letting people know, clear all the suspicions and just be there. That’s the life they lead, and these are the problems they face. Try to tell the truth

What was the most challenging part of your experience filming in Beirut?
That was such a long time ago. In 82? 83. It was after the Israeli left Beirut, so it was in a state of war, but we were very naive. One night, we were sleeping with the refugees, and we were at the beach looking at the stars, and the cameraman, Jacques Leduc, was showing things with his flashlight, and we induced a terrible fear in the camp, because they thought somebody was shooting. Shooting went on. We made a big error, but otherwise it was being with the people in the camp, living the life they led with them, and trying to say what they went through. And what all people go through in wars.

Why do you choose documentary filmmaking as your medium for telling these stories?
What a big question. There are two things in documentaries for me. One is people, and two is people, three is people. It’s being with people. And also that side of me that loves images. When I was a kid I wanted to be a painter, but this didn’t work out I guess, but working with images, thinking and creating, thinking about the film as a story that you tell. Just as you have novels, essays, short stories, so you have different ways of telling things in cinema. And documentary is one of them, and I love it.

How do you find hope in this desperate situations?
People. People. You find friends, these girls there? These are strong women. Strong young girls put in very tough situations, but they are the strongest, because they dare to have the dream that life can be different. In Beirut also, it’s people, who go through hardship, but they are also strong. I admire the people I film, usually. Because they have this capacity of going through difficult stuff without losing their humanity and their strength, and teaching us how to live. Voila.