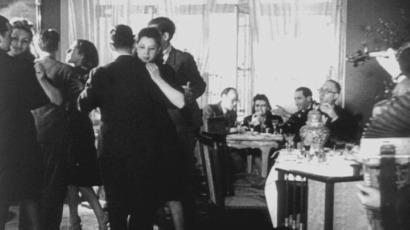 An Interview With Yael Hersonski, Director of A Film Unfinished

“When I embarked on this journey I was (and still very much am) bothered by our contemporary ethical status as passive (Israelis, in my case) viewers – as citizens who imagine they know ‘something’ about their reality, for they watch the media reports, but in fact remain paralyzed in front of the limited television screen and its edited images.”

Yael Hersonski’s film is difficult to watch. Interspersing footage from an unfinished Nazi propaganda film about the Warsaw Ghetto with interviews from survivors, two things become clear. The first, and most alarming, is the dismal and horrific treatment of the people imprisoned in the ghetto walls. The second is the extreme discrepancy between this reality, and the reality the Nazis were attempting to portray. Hersonski interviews not only survivors, but one of the cameraman, who testified against upper-level Nazi leaders after the war. The extreme juxtaposition, regret, rage, and sorrow expressed by the interviewees, and those captured hauntingly in the old footage, make for an extremely moving piece.

Was it painful to sit with the survivors while they pointed out the discrepancies?
It was painful to interview the survivors for many reasons, and not only when they pointed out the discrepancies. All of them were over 80 years’ old, brave souls inside such fragile bodies, yet no matter how brave they were I was simply terrified to confront them with images they had to repress, daily, in order to survive . I was aware of the emotional intensity which might be provoked by merely seeing their home town during its worst times, during their worst times, times no one can actually translate into words. Watching it on the big screen, isolated inside the dark cinema hall – I felt all of them were experiencing something which was touching that past in its most immediate dimension. Before inviting the survivors to the cinema hall, where we screened the four silent 35mm reels, I asked them again and again: “are you sure you want to do it?” All of them replied “yes” with strict determination. Not that they were not trembling from anxiety while climbing down the cinema hall, but all five of them felt utter urgency to be able to have the last audible comment on the silent images, for they were there. When it concerned the survivors I didn’t want to take any risks.

What discovery shocked you most in the process of creating the documentary?
For me it was the discovery of the protocols which documented a preliminary interrogation with one of the Nazi cameramen who shot the footage. To begin with, no one even suspected it exists. All that was known till the point I started to research the making of this unfinished film was the cameraman’s name. The German archivists tried but failed to reveal more regarding his identity. The revelation of such a rare point of view on the event of the filming – a point of view through the eyes of the uniformed photographer – the one who saw and did nothing (a situation we know so well from our own contemporary situation in the Middle East) – a documentation of an allegedly icy official interrogation, yet in fact it is a report which exposes so much of the speaker’s intimate conflicts, that it became one of the main foundations which builds the structure of the film.

Why did you feel it was important to tell this story?
When I embarked on this journey I was (and still very much am) bothered by our contemporary ethical status as passive (Israelis, in my case) viewers – as citizens who imagine they know ‘something’ about their reality, for they watch the media reports, but in fact remain paralyzed in front of the limited television screen and its edited images. What do we know about the suffering subjects we briefly see on our news programs, what can we tell about their pain, if at all? How are we used to watching what is being edited for us, and how much are we aware of what was left outside the frame?
The Holocaust confronted humanity not only with inconceivable atrocities, but also –with a massive, systematic, and, for the first time in history, also cinematic documentation of those atrocities. My aim was to return to that crucial starting point in the history of cinematic documentation of human atrocities, and by exploring it, by approaching it as a study case – to learn something about our contemporary abilities and limitations as citizens (viewers) of a country which knows much more of war than of peace.

What is the hardest part of the propaganda footage for you to watch?
The obvious difficulty was to watch, and moreover – to edit, the mass grave scene. But even more difficult than that was to watch the people gazing into the camera, meaning – towards me. To know the post factum truth, to know that these eyes which are begging for life – at present time – now belong to past’s abyss – this was, for me, the most atrocious experience.

Did you have any challenges tracking down the subjects interviewed for the film?
We had a marvelous Israeli researcher, who contacted almost every survivor from the Warsaw ghetto. She was not only extremely thorough, but astonishingly quick – as we all knew time was ticking. I didn’t expect to find more than two interviewees who could remember such a small event like filming inside the Ghetto, from a distance of 70 years. Finally we located more than five, but only the five who were interviewed were found strong enough to confront the task of watching the footage.

What inspired your decisions for the structure of the film?
The 35mm print we screened to the survivors at the Jerusalem Cinemateque was divided into 4 reels. At a very early stage of the writing I knew this fact could be used to construct the film into 4 chapters, which will gradually unfold the many layers buried under the images. Having a schematic idea of the structure, we could continue to shape it during the editing stage.

How did you determine which images to use from the footage?
My initial idea was to expose, for the very first time, the entire footage, which lasts 62 minutes. During the post war times only a few minutes of it were exposed and recycled again and again. Finally I decided to leave out 2 or 3 scenes which I found simply pornographic, and which didn’t add any valuable essence to the film. My main ethical problem was how to expose the very nature of the Nazi documentation without repeating the humiliation of its subjects by exposing them again? I’ve decided to follow the survivors’ gaze: whatever they could not watch – I didn’t show. Instead, I’ve showed them concealing their eyes, and remained the original duration of the film without exposing every frame of it.