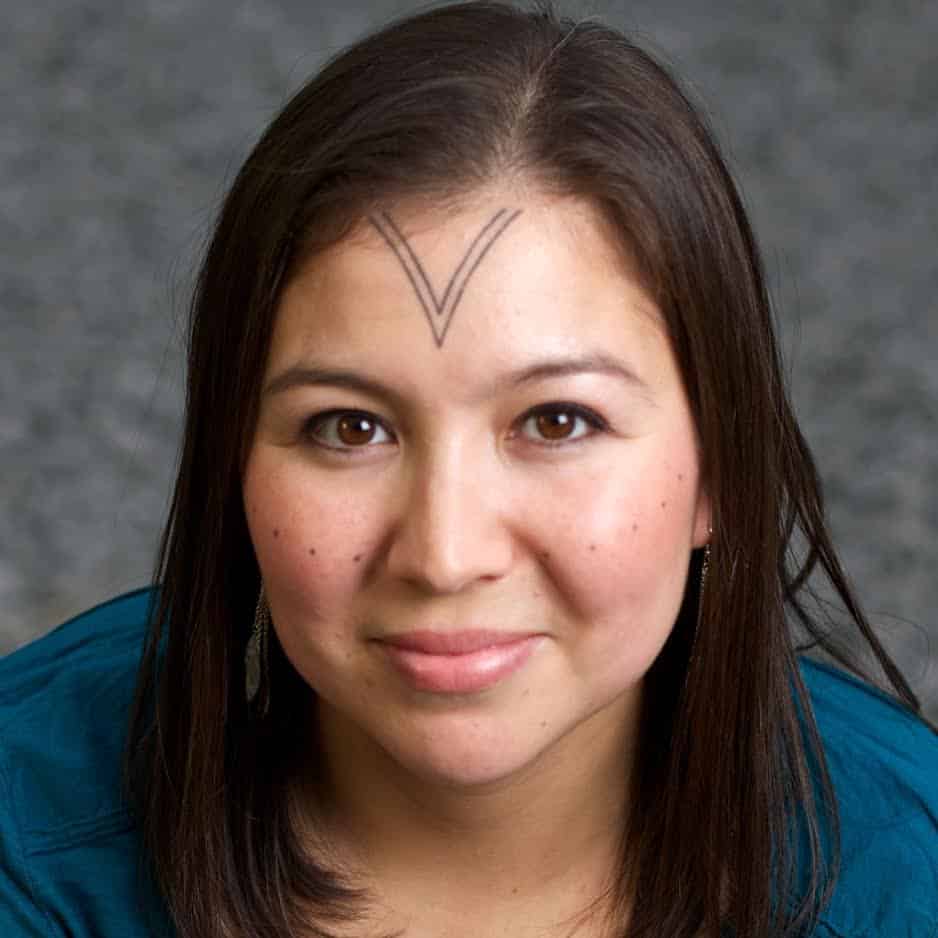 Angry Inuk opens quietly with breathtaking views of still, dark blue water and gently floating ice caps in Kimmirut, Nunavut. We then meet filmmaker, Alethea Arnaquq-Baril and watch her participate in a seal hunt: there is a small boat, three people, and one seal. Aside from the sounds of a whistle, a quiet shot, and boots crunching on snow, the catch of the seal is peaceful. In this landscape, the scene looks very natural. There is nothing offensive about it.

Once the seal is brought to shore, it is sliced open and organized into parts. Intestines are carefully looped and knotted like a rope on a boat, brain is eaten on the spot, and the rest is organized to share with the community. The camera then moves into the living room of a local home where an elder is making phone calls, inviting anyone who is hungry to come share the fresh kill. After eating, families pack up portions of meat to take home. What isn’t eaten will be turned into clothing that will help the locals survive as the winter temperatures drop as low as -50; there is no part of the animal that goes to waste. “I wanted to make this film because it bothered me when I saw animal welfare groups portray seal hunting as an evil and greedy thing,” says Alethea. “The images and statements they put out don’t reflect the seal hunt I know.” 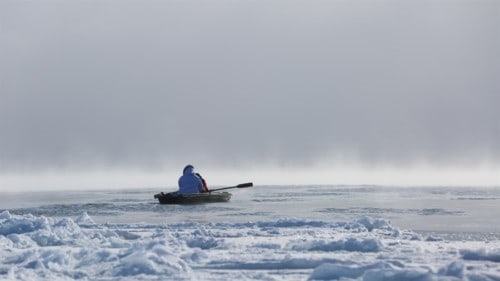 Since the sixties, animal rights groups like PETA, Greenpeace, and The Humane Society have been on a mission to stop seal hunting, branding the industry as inhumane. Celebrities like Pamela Anderson and Ellen DeGeneres have lent their name to the cause to help grow the worldwide furor and pressure the Canadian government to increase hunting bans. Though their protests were sensational – with naked bodies covered in red paint – these welfare organizations weren’t actually visiting the north to see what commercial seal hunting looked like. “How could these groups work for so many decades to crush our industry without ever having seen it with their own eyes?” asks Alethea, who is angry that the living conditions of the Inuit people, who already struggle with numerous challenges put upon them, are now forced to limit their cultural traditions and economic sustainability further by individuals and groups unwilling to visit the land and understand the whole picture.

With abominable food costs (e.g., celery stalk: $14.50; bag of flour: $13.70), seal is not only an important economic industry but also a valuable food source. Angry Inuk does a wonderful job sharing the stories of daily Inuit life in Nunavut while also giving a more accurate picture of what most cases of commercial seal hunting really look like. (Visualize a circle of grandmothers using their own teeth and muscle to soften a pelt.) 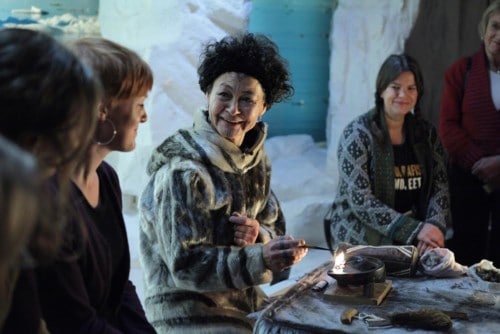 With industrial farms peppered throughout North America and Europe caging animals in deplorable conditions, only to sell the meat to wholesalers who take certain parts of the animal and chuck the remainder of undesirable parts, it would appear that focusing attention on seal hunting in the north is misdirected. While Angry Inuk doesn’t directly point a finger at major animal welfare groups for being corrupt, Alethea definitely calls them what they are: big businesses.

In 2015, PETA brought in $44,923,150 in revenue and The Humane Society reported $249,379,458 in assets. “These groups are so huge now. They are massive organizations. People think of them as little non-profits doing their best to save the world; now they are so powerful,” says Alethea. “Leading up to the 2009 ban on seal products in the European Union, I remember hearing on the radio a member of European parliament being interviewed by someone from CBC. They were saying they were bullied. They had an election coming up in EU and the animal groups were threatening them. To this day, we can’t know who was truly supporting the ban, and who was simply afraid of ruining their political careers.”

At the time of our interview, Native Americans were being shot by water cannons in freezing temperatures while peacefully protesting the construction of the Dakota Access Pipeline through Standing Rock Indian Reservation, their sacred land. In Canada, Inuit were engaging in a hunger strike in the Muskrat Falls area, trying to ensure that environmental standards were met in a 12-billion dollar hydro dam project that could potentially pollute the waters with mercury poisoning. Local Inuit hunters lay down in the basin that was set to be flooded, doing their best to protect their environment from harm. Who was noticeably absent? The aforementioned activist groups. Alethea says, “I have a really hard time believing that any of these groups truly give a crap because when it counts, they aren’t there!”

While this film centres on the sealing industry, Alethea is quite politically active and outspoken on many other issues. Chatting about her activism, I ask her if she has one main objective with her films: “Unshaming, or rejecting shame that people have put on us, whether it’s from the government, the church, or animal rights groups.”

As a privileged white woman in Canada, I admit I feel a lot of guilt about the struggles and inequities that are rife within our country’s Indigenous populations, but Alethea reminds me that this guilt is neither justified nor helpful. “I think the guilt thing is important to address. I spend a lot of time reading about Indigenous issues and cultural appropriation and colonialism and all that stuff, and I think something that Indigenous people are often inspired by is the work that the Black Canadians and Americans do for their issues. I remember coming across a little meme that somebody was sharing that said, ‘We’re not asking you to feel guilty about things that have happened in the past, we’re asking you to acknowledge that the remnants of those systems still oppress us today.’ I thought that was brilliant because people today should not feel guilty about things they didn’t do in the past, but we do need people today to recognize that it is not just in the past, that there are still structures and mindsets that exist today that continue to oppress Indigenous people and people of colour. I think the biggest thing is to be careful about feeling pity, because it’s not helpful. A very powerful thing is to just believe us and trust that we know what we need and are capable of doing what we need to do if we’re given the resources to do so.”

With all the activist work that Indigenous people do in this country to save our waters and our land, you’d think politicians, organizations or the general population would be able to listen better. “It’s assumed we are kind of backward or simple, or uneducated living out in the boonies and don’t really understand. We’re constantly condescended to. When it comes to animal and environmental issues, a huge obstacle for us is getting people to believe we know what we’re talking about. For example, the seal industry. Animal groups will often say, ‘They don’t realize that we’re not against them; it’s the commercial sealing we’re against.’ Of course when the main image Canadians have of Inuit people is that we’re tiny little remote people who live behind the times, they believe that. They don’t understand that when the anti-sealers say we’re against commercial sealing, that means they’re against Inuit sealing because the majority of commercial sealers are Inuit.” 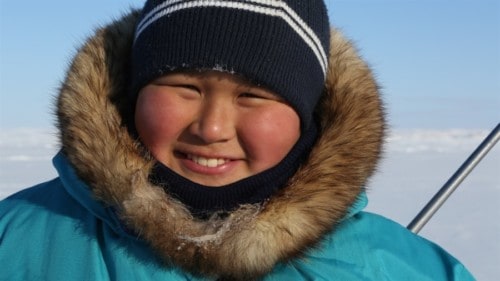 Beyond listening, if you want to be an ally, the best place to start is by reading the Truth and Reconciliation Act. When the news of youth suicide pacts in Attawapiskat broke the news last year, I found myself spinning, trying to figure out how to help. (Organize a skateboard drive on Bunz! Drive up a van of donated sports equipment!) While my knee-jerk ideas grounded in emotion had good intentions, my conversation with Alethea was a kick-in-the-butt reminder that countless individuals have been working on these complex problems for years, and that my temporary Band-Aid ideas don’t respect that. “There are very thorough and sustained initiatives that have been undertaken by various Indigenous leaders for decades that address these things. The National Inuit Association just released a suicide prevention strategy, and there are very clear recommendations in there.”

Next time you find yourself outraged (or have a moment to read), pick up the TRC report, or at least the executive summary. “It took years and years of traveling and consultation and listening to people all over the country who experienced the trauma, who lived through it and worked to find solutions, tried them to see what works and doesn’t – so with experience they’ve come to a consensus of what we need to do. The recommendations are very powerful and they address things in a broad way, but they are very actionable items that make a difference over the long term.”

If you want to directly help Inuit people with issues outlined in Angry Inuk, Alethea also has recommendations: “Write to environmental groups and pressure them to do better, to reverse the bans they put in place. A ban is intended to address a big problem and you can put an exemption for minor exceptions to the rule, but when Inuit are the majority of commercial sealers, the legislature should be based on us and exceptions or regulations should be designed for other concerns. I won’t be satisfied until these groups are pressured to change the legislature to be more reflective of Inuit seal hunting.”

Angry Inuk has made waves in the festival circuit, scooping up numerous awards, including the prestigious Doc Vanguard Award and the Vimeo on Demand Audience Award at Hot Docs in 2016. It is currently being celebrated as one of Canada’s Top Ten films of 2016 and will soon be available through the NFB. So, here’s my advice to you: see this film.