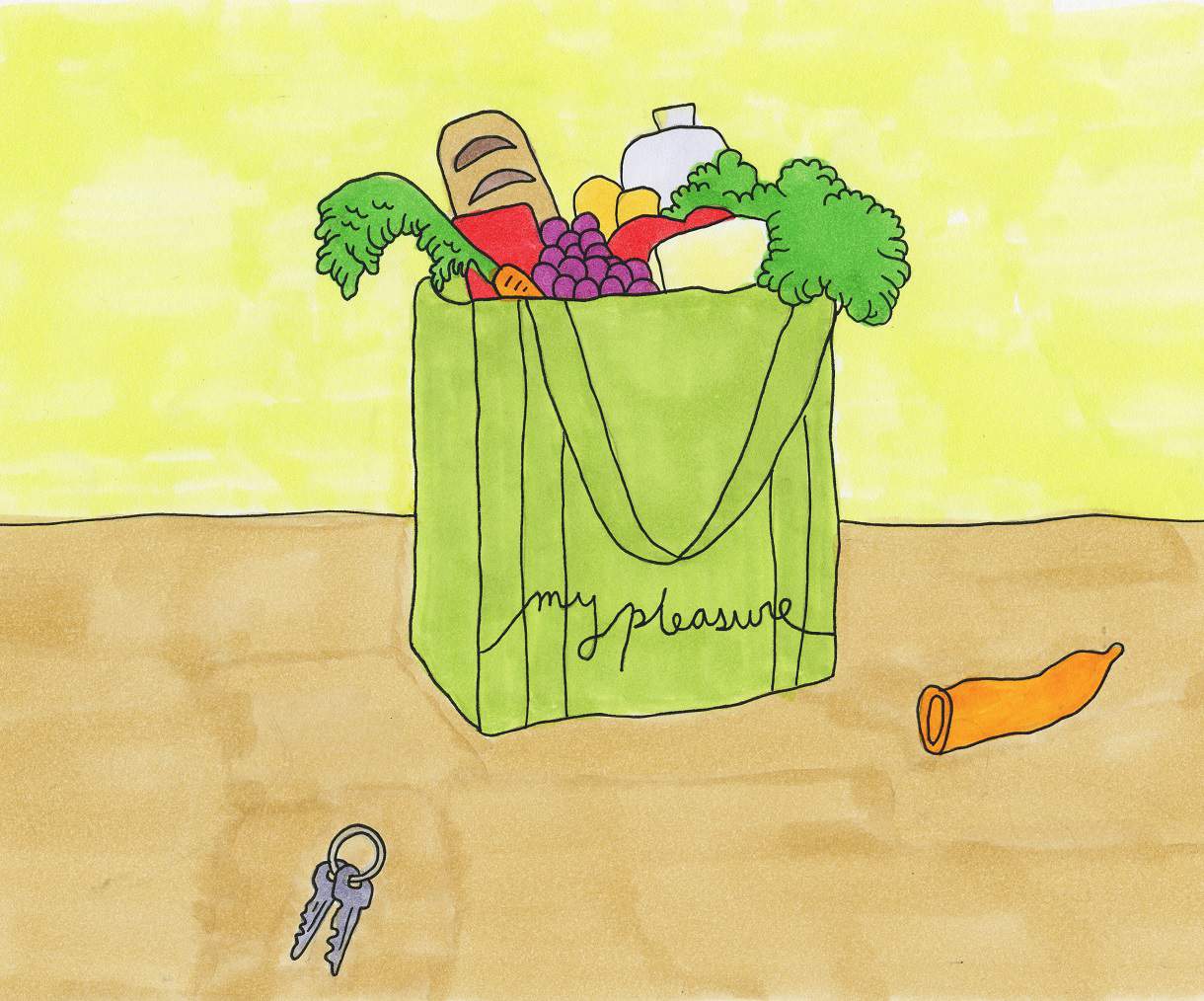 It’s been a helluva ride; we want to thank We-Vibe, and wish you all a happy, safe and sexy new year!

This is My Pleasure by Anessa Adeusi.

The flirting, the games, it had to stop. She wanted him and there was no better time than the present. Kara watched from her peephole as Dean unlocked his door, he used a code that she wrote down and hoped to God that she got it right. She needed to get into his apartment to put her plan in motion; she was horny and couldn’t think straight and it was all his fault. Every time he saw her, he’d say “hello” in that deep, masculine voice that she loved so much. He always looked her in the eye when speaking to her, and oh, she couldn’t forget the way he twisted his long dreads into a bun when he was preparing to help her with her groceries. Yes, it was time to end the games and she had just the plan. She’d watched him for months and had figured out his routine. Once he unlocked that door, he was heading for the shower which gave her 20 minutes to freshen up, get ready and be at his place. The thought of what was about to happen had her dashing from the peephole to her bedroom; tonight, was going to be fun.

He was enjoying his shower when he heard the “beep” from his alarm. He took a quick look at his camera and saw her, beautiful Kara. She was bent in front of his door with a bag of groceries. He figured she must have gone to the wrong door and was about to tell her when he heard her say, “I’m going to fuck him tonight! Even if it means breaking this damn door down! Ugh, why won’t this fucking code work?”. She wants to fuck me. He thought to himself, he couldn’t help but chuckle. If she wanted to fuck him, all she had to do was tell him, but he guessed she wanted to do it her way. As for the code, she was never going to get in, the code had to be entered with his fingerprint for it to work. He chuckled again watching her, he hoped she knew what she was doing because once he let her in, he had every intention of fucking her hard, but he’d let her play her game first. He watched her enter the code again and decided to unlock it from his end; he watched the grin that lit her face and he knew tonight was going to be fun.

Victory! She unlocked the door and did a quick happy dance before going into his unit. She could feel her panties get wet with anticipation. She had left the grocery bag in front of his door as there was nothing in it, she had simply needed an excuse in case someone saw her. She walked in and looked around his unit, however, the only room that was of interest to her was his bedroom. Kara quietly walk towards his bedroom; the door was open and there he stood with his back to her. He was a big and gorgeous man who was only covered by a towel around his waist. For a moment she hesitated but once she felt the trickle of her juices down her leg, she knew she had to take care of business. She had never been this turned on in her life and the object of her desire was standing before her. He still didn’t know she was there, taking one last breath, she slowly took off her trench coat and her bra, leaving her naked on top. She decided to leave her panties and heels on. She walked towards him in hopes to catch him by surprise when she heard the bedroom door slam behind her.

He heard her gasp loudly and he chuckled, game over! He had waited and watched her through the camera. The nerve of her to think she could break into his house and fuck him, well she had something else coming for her. He loved a bold woman, but he was bolder. “So, you want to fuck me,” he said, not a question but a statement. He could see she hadn’t expected this, but she was going to get it anyway, she was on his turf. He saw her lift her head high and declare loudly, “yes, I want to fuck you.” He smiled, satisfied with that answer. He immediately dropped the towel from around his waist and said, “then come over here”.

She knew she should be scared, but she got more and more excited. She had wanted to shock him, but he had turned the tables on her. She really didn’t mind though as long as she was getting fucked. She walked closer to him and watched as his cock grew larger and thicker. Oh yes, she picked the right man for the job. He pulled her forcefully towards him once she got close enough and turned her around so that her back was to his chest. He held her two hands captive with one of his own and tilted her head back to whisper in her ear. “This is not going to be soft and sweet, but rather hard and dirty, sweetheart.” Without warning, he ripped her panties from her body and inserted two fingers into her pussy.  “You are so wet” he said as he stroked her pussy with his hands. “Tell me what you want,” he said. She couldn’t think about the details, but she knew she wanted to be pleased.

Dean moved Kara to the bed, if pleasure was all she wanted, then pleasure he would give her. He knew she hadn’t realized that he had ties on the bed, but he had set that up just for her. He had also set up some toys for her, but he bet she hadn’t seen those either. The plans he had for her were strictly pleasurable, but she had to be taught a lesson. He rarely explored this side him but hearing her over the camera had him in the mood to explore. He removed his hand from her pussy and released her hands from behind her back. “Get on the bed,” he ordered. “Spread your legs and arms wide.” He saw the look of surprise on her face, but it was gone in a flash. He tied her legs and arms to the bed frame and looked at her. She was a work of art, beautiful and patiently waiting to be pleased.

The Internet had told her it would hurt, and it had, but now she was ready for a man. This man, however, was taking his sweet-ass time. “Okay, I’m hungry too, so could you just fuck me now and we can get a bite to eat after?” she heard him laugh, obviously she had said something funny. “Kara, I plan to eat now” he said as he strode towards her and planted his face between her legs, his tongue darted out and licked her clit and she gasped. She had not been expecting that, but it felt good. As he licked and sucked her pussy, she wanted to grab his hair, but her hands were tied. He licked all around her pussy, sucked her clit, then inserted his tongue into her pussy. He replaced his tongue with his fingers and moved his tongue to her clit. He used his free hand to play with her nipples making them hard. He moved his head towards her breast and sucked each nipple into his mouth with the same rhythm he was fingering her pussy. The pleasure was intense, it had her moaning and shaking, she was on the verge of an orgasm when he removed his hands from her pussy and lifted his head from her breast. “NO! don’t stop, I was almost there” she said. Again, he chuckled and said, “don’t worry, you will get there again soon.”

Kara was so frustrated! Twice he had stopped her from an orgasm but there was more pleasure in revenge. “Untie me Dean,” she said with a little more force than necessary, but it was time for her to take control. He untied her legs first, untied her arms, and she pulled him onto the bed startling him. “No more games. I want you to fuck me now!” Not one to be asked twice, Dean flipped their positions and entered her in one smooth and hard thrust. “DEAN!” She screamed as an instant orgasm slammed into her. Her body shook over and over as Dean continued to thrust into her. He softly choked her which was different from the hard thrust in her pussy. She moaned as he put her legs over his shoulder to penetrate her at a deeper level. Another orgasm rocked her, but dean was not done. He turned her so that he back was to his front, “I want you to watch me fuck you” he said, and she noticed for the first time the full-length mirror in his room. He pulled her arms back and thrust into her from behind with full force. This is how she had always wanted to be fucked; she could feel herself creaming his cock. His thrust became faster and harder and she could tell he was about to cum. “Dean, I want you to cum in my mouth.”

Without missing a beat, he eased out of her pussy and watched her get on her knees in front of him. She stroked his dick then put it inside her mouth. She slowly swirled her tongue around his head, and he lost it. He was past the point for slow. Filling his hands with her hair, he thrust deep into her mouth. She gagged on his dick and the sensation was wonderful. He kept fucking her mouth like a possessed man, but it felt so good and warm. He gave one more thrust and let out a hoarse cry as he ejaculated deep in her throat. Kara licked her lips and watch as Dean lifted her back onto the bed. He got on his knees and began to eat her out again. Her clit was extremely sensitive to his tongue and she could feel her orgasm coming. Dean penetrated her with his fingers and felt her shake. He knew it was time to unleash her pleasure. Removing his fingers from her pussy, he moved his hands towards her breast. He sucked on her clit as he removed the clamps from her nipples. He heard her loud scream as she squirted, he continued to eat her out as she shook from the intensity of the pleasure. Once she stopped shaking, Dean tucked her into bed, she had passed out. He couldn’t help but chuckle at the pleasure they had both received; tonight had definitely been fun.