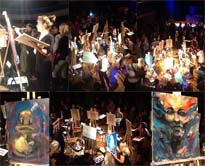 Listen. I’ve tried to paint before and failed miserably. That’s why I went to Art Battle last week at the Great Hall, so I could watch painters do what they do best.

Art Battle is a monthly competition where artists whip up a painting in 20 minutes. It’s not entirely based on skill, but it’s also based on efficiency. The audience votes for their favourite, then the paintings get auctioned off.

There are three rounds at Art Battle, and the third round is the championship. This is a real-life competitive reality show – no screens attached. Step aside, Heidi Klum.

Trays of multicoloured acrylic paint lay like pieces of sushi on white palettes. The spotlights focus on the easels as the artists prepare themselves, mentally and physically.

“I can’t believe the canvasses are so tiny,”  says second-round champion Craig Skinner.

The painters at Art Battle are assigned their choice of acrylics paints, which can be a challenge for artists relying on oil. Craig explains to me that acrylics, developed in the late 1940s, aren’t made to last. It’s no wonder that destroying unsold paintings at Art Battle is part of their tradition.

Painting is filled with idiosyncrasies I just don’t understand. That’s why it’s so poetic, so romantic. I overhear Craig’s discussion with another painter. “What kind of red? A cool red? You need that to make a magenta,” he trails off into the nuances of colour theory, which I have no idea about. I’m so fascinated by how I know absolutely nothing about this.

So, if you’re looking for something different to do, or if you want to be baffled by colour theory like me, you’re going to have to check out Art Battle. It’s actually more fulfilling than drinking yourself stupid at a club or going to your regular dive bar. Seriously. For the next battle, check out the website.

Truthfully, I don’t think I could produce any meaningful work in 20 minutes unless it was a plate of nachos. I’m going to go do that right now.