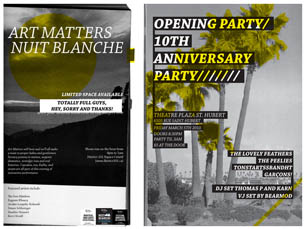 by Heidi Craig
Last year’s Art Matters provided me with my most memorable art experience to date: A DJ set where the turntables were made from real, piping hot pizza pies. They were able (don’t ask me how) to generate actual (if not exactly danceable) sounds from spinning pizzas hooked up to a computer (the pepperoni provided the base). After the show, the pizzas were divvied up and distributed to be eaten by spectators. From the wacky and delicious to the stunning and solemn, Arts Matters is devoted bringing all levels of art to the public. The student-run festival – the largest of its kind in Canada – features two weeks of student art displayed in professional venues and galleries throughout Montreal. Now in its tenth year, they exhibit all forms of art produced by Concordia students: animation, dance, design, film, music, spoken word, theatre, video and visual art.

For the next 18 days, there will be no shortage of weird and wonderful art shows, so take your pick! Here are a few of this week’s highlights:

Drawing the Line in Painting Vernissage
When: Tuesday, March 2nd, 7pm – 9pm
Where: VAV Gallery, 1395 Rene Levesque W.
How much: Free.
What: This show evaluates contemporary conventions of painting by demonstrating its fusion with drawing, sculpture, digital media, and installation. With displays from artists Laurie MacInroy, Shawn Davis, Colin Wintz, Cora Woellenstein and many others.

When: Friday, March 5th at 8:30pm
Where: Theatre Plaza St. Hubert, 6505 St-Hubert.
How much: $5 at the door
What: The fun kicks off this Friday with an Opening/ 10th anniversary party, with performances from the Lovely Feathers, Peelies, Garcons! and Tonstartssbandht.

Magic and Science Vernissage
When: Saturday March 6th. Show runs ‘til March 19th.
Where: Galerie Yergeau, 2060 Ave Joly.
How much: Free.
What: The line between magic and science is less obvious than you think; be wowed with this display of optics, physics, artistry and wizardry.

For all shows and schedules, check out  http://artmattersfestival.com/