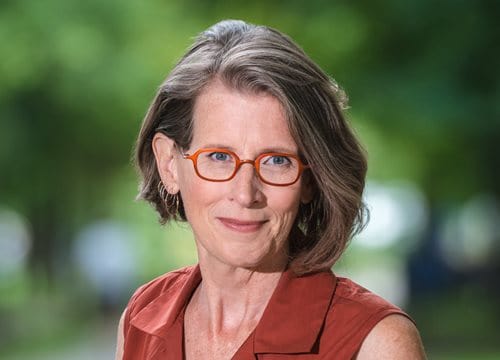 When Naomi Campbell was a kid, she always imagined she would work in theatre, music or dance. As she grew, she became more interested in changing the world, and began to realize that theatre could be a useful tool to accomplish that. Her career has evolved considerably since her initial intention for it. “I think it was easier to be less strategic when I was young,” she says. “Rent was cheap; living month-to-month wasn’t too stressful if you didn’t have kids. Right before I turned fifty, I quit all my freelance gigs to leave space for something different to happen.”

Soon after that, Campbell took her first contract with Luminato. That led to more contracts, eventually landing her a position as the Artistic Director. “While I have been involved in a lot of festivals over my career I didn’t set out to run one,” she says. “That said, it feels like a good fit!”

We asked her about what goes into running a major festival and how she’ll be celebrating to say farewell to this year’s event.

SDTC: There are a lot of moving parts with a festival like Luminato. What is the biggest challenge in developing a festival of this magnitude? What do you enjoy most about it?

NC: I think the moving parts are exactly the biggest challenge. Changing one thing undoubtedly affects something else, so we all have to be very detail-oriented. My favourite part is still when we are actually putting on the festival: when we are loading in shows and setting tech cues, visiting local rehearsals and welcoming artists from out of town. I come from the theatre and I still get excited by those final weeks before we open, when everything finally comes together. Human effort creating amazing experiences is an equation that can’t be beat.

Walk us through a typical day for you lately. How does it play out?

CBC’s Metro Morning wakes me at 6:45 and I typically wait until after the 7 o’clock news to get up; a quick shower is followed by breakfast of homemade granola and yogurt. I usually check emails at this point, replying to the urgent ones, and flagging others for follow-up. Sometimes I try to get a household chore in before I head to the office; some days I work out for an hour at 8 a.m. Mostly I like to get to work around 9 a.m., though of course that’s not always the case. Unless it’s snowing or pouring rain, I ride my bicycle; it’s a quick downhill ride to the office and I like to have mobility through the day. I can usually get to outside meetings faster than my colleagues in cars.

I often stay at the office into the evening. Sometimes that’s the only way to get emails written, when it’s quiet. I go to lots of shows—theatre, dance, music, opera and more. Most weeks I see between two and four things, sometimes more. If I’m home I cook, catch up with my partner, do the laundry and stuff like that, try to read. I go to bed around midnight most of the time. I used to be able to get more done late at night, but those days have passed!

What is the best career advice you’ve been given? Worst advice?

Best advice: Just put one foot in front of the other, and you will eventually get the work done. Worst advice: Don’t sweat the small stuff. I don’t abide by this because attention to detail is crucial. It’s the details that make the magic happen.

What are you most looking forward to at Luminato this year?

Standing by the pond at Harbourfront Centre at dusk on June 23, the last day of the festival, as 200 choir members and soloists gather along the boardwalk, around the pond, and high up on the rooftops to perform the world premiere of Cris Derksen’s Maada’ookii Songlines while the sun sets. It is the last show of the festival, and I am sure that I will be happy and proud and exhausted and full to the brim with special memories.