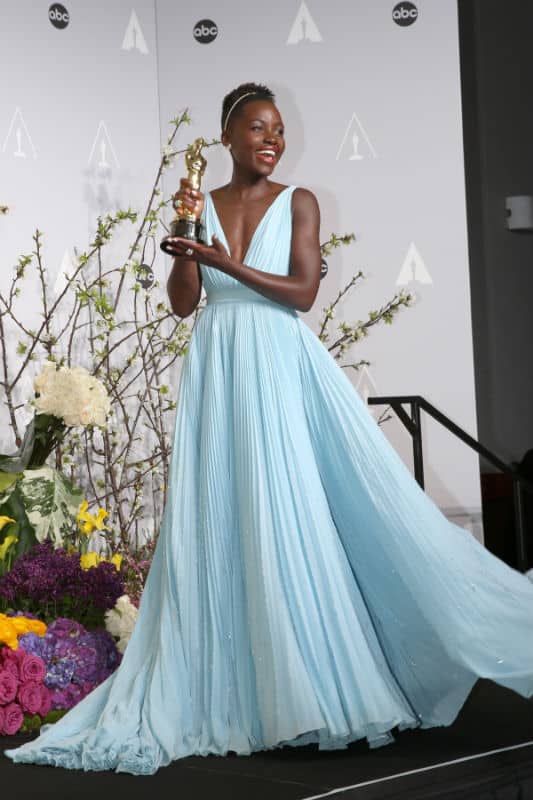 As buzz for the Academy Awards reached its usual fever pitch this weekend, The Representation Project urged movie fans on Twitter to use their hashtag #AskHerMore in response to red carpet hosts who focus solely on actresses’ clothing and not their work. I can understand why this would seem like a good idea. I too have rolled my eyes at reporters who gush, “Who are you wearing?!” to every woman they interview. But at the same time, this whole campaign felt wrong, like it was created by someone who doesn’t really understand how the Oscars work.

Let’s be honest with ourselves, while the Oscars are there to make viewers at home have warm fuzzy feels about the film industry, they are mostly transactional. There’s a whole lot of insider politics that goes on, not to mention the months of campaigning waged by actors, directors, producers and film companies. Fashion at the Oscars is just another layer to that. Sure, it’s about making the stars look good, but it’s also about designers getting their names out to a wide audience and ensuring that their spokeswomen are out on the red carpet pushing their product. Anyone who was watching closely would have noticed that even when actresses weren’t explicitly asked about their dresses, they would offer up the name of both the dress and jewelry designer they were wearing. Again, it all comes down to promotion; wear the dress, get the designer name out there. As I watched the red carpet coverage on three different networks I noticed that the #AskHerMore campaign didn’t have much to complain about. Yes, actresses were asked who they were wearing, but conversation quickly moved on to other questions such as “Do you remember your first time at the Oscars?” “What was it like to work on this movie?” “What projects are you currently working on?”

And while the Oscars might be about honouring film, we can’t ignore the fact that fashion and film are closely intertwined. ABC (which aired the show) pushed this connection a step further during its red carpet coverage by featuring clips about the history of fashion at the Oscars as well as short segments explaining the significance of fashion and costume design in some of the movies that were nominated for Best Picture. Whether we want to admit it or not, fashion is an important part of the movie industry. Lupita Nyong’o may have won an Oscar based on the merit of her performance in 12 Years a Slave but it’s the stunning dresses she’s worn throughout this awards season that have kept her front and centre in media coverage. On what is considered the most glamorous night in Hollywood, it makes sense that there is going to be some focus on the opulence and extravagance of the designer dresses that are draped over the actresses we know and love.

At the end of the day, the banality of questions asked on the red carpet may have more to do with what broadcaster you choose to watch than anything. As I tracked the #AskHerMore tag on Twitter I noticed that the majority of complaints were about questions from E!’s presenters. Sorry loves, but did you really expect anything better from the channel that brought us Fashion Police and the Kardashians? While ABC had a few missteps with its coverage, for the most part they were adept at getting the fashion out of the way and moving onto real interview questions. In an ideal world, men and women would be asked equally about their work. But this isn’t an ideal world or even a real world. It’s Hollywood. And as long as it’s tied to sponsors, fashion will always be a part of the Oscars.