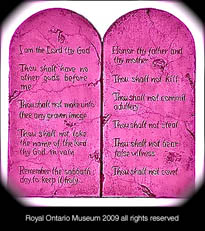 At The ROM: Three New Commandments

Adding three new commandments to the top ten that Moses relayed from God to the Israelites would be like adding three new rail liquors to the sacred five: a controversial, though nonetheless thought-provoking endeavour.  But if making a good mixed drink is comparable to living a good life, should the rules be the same now as they were over 2000 years ago when the stone tablets were served up to people?

That’s the question that the ROM’s lecture series The Three New Commandments, in honour of the museum’s upcoming exhibition of the Dead Sea Scrolls, is going to throw around and maybe even answer on three consecutive Tuesdays in June.

To highlight the relevance of the ancient scrolls in modern day life, the ROM has invited provocative authours Christopher Hitchens, A.J. Jacobs and Camille Paglia to the museum to chat about the Ten Commandments and their impact and/or irrelevance to daily life.

Christopher Hitchens began his career as a foreign correspondent in Cyprus and was closely aligned with the radical political left throughout much of his life as a writer.  He’s an atheist, anti-religious and wrote the controversial and acclaimed book God is not Great: How Religion Poisons Everything. After claiming waterboarding was not torture, he volunteered to experience it for himself and quickly changed his mind.

A.J. Jacobs wrote the book The Year of Living Biblically: One Man’s Humble Quest to Follow the Bible as Literally as Possible in which he discovered that stoning adulterers was a rather socially difficult task.  Jacobs lives his life as a series of experiments which he then writes about. Some of these experiments have included outsourcing the minutiae his life to India, attempting to become the smartest man on earth, and living life with radical honesty.

Camille Paglia is a religion-respecting atheist and a cultural studies, sex, and feminism aficionado.  She wrote the barnburner Sexual Personae: Art and Decadence from Neferiti to Emily Dickinson. While embracing homosexuality, fetishism, prostitution, and pornography, Paglia has been critical of the feminist movement stating that women within the movement have been typically ignorant of history, art, and science, teaching women to see themselves as victims. In other news, Paglia has openly condemned Michel Foucault for deliberately spreading HIV.

While perhaps not as party-inducing as the liquor rail, the ROM’s lecture series will nonetheless get you knocking back and metabolizing the Big Questions, illuminated by these opinionated and lively speakers.