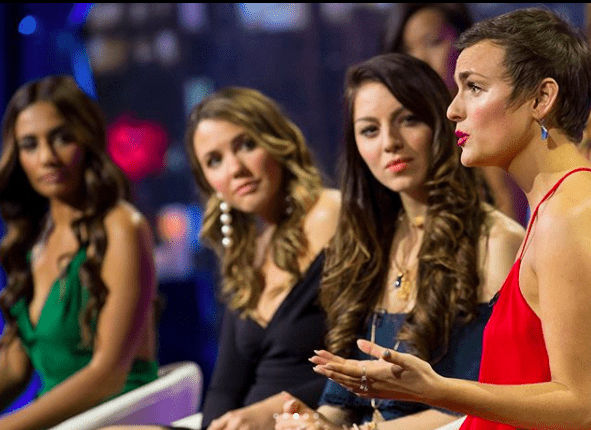 So this week, I’ll keep the recap short and sweet. Last night was “The Women Tell All” installment of Bachelor Canada, so the episode spoke for itself, literally. And I mean that in more ways than one, because the producers assembled a tribute video celebrating all the wacky ways in which Chris and his contestants used and abused “literally” as an adverb, and it’s literally their favourite word. It is because of Bachelor Canada that no one understands the difference between “literally” and “figuratively” in 2017. Reality TV is eroding our vocabularies, but I don’t care because it’s fun and the people are pretty.

For the uninitiated, “The Women Tell All” special is the penultimate episode of the season. In it, the former contestants gussy up and get together in some dank film studio. Once assembled, they dish on what happened behind the scenes. They also receive the opportunity to confront Chris about any crimes or misdemeanors he may have made.

The episode started with a cross-examination of Shanti, the stunning model who famously spilled the beans to Chris about Dee having a baby. There is no doubt in my mind that Shanti’s telling Chris about Dee’s daughter was a gross violation of trust. Dee had wanted to tell Chris about her child at the appropriate time and not through someone else; however, just because one person behaved as a bully is not a “get out of jail free card” allowing you to bully them. An eye for an eye is not an appropriate life philosophy. When you bully the bullies, you lose all moral authority. Revenge is always complicated, and it’s rarely as satisfying as you think it will be. Please See Zero Dark Thirty if you don’t believe me. Obviously the contestants of Bachelor Canada have not seen it, because they decided to act like a pride of lions hunting a gazelle.

First and foremost, Shanti was rebuked for the cutting comments she made during the season. While I would never defend Shanti’s body-shaming remarks about Brittany W., no one seemed to care that Brittany W. had jumped on her in her sleep. Is violence not problematic in Bachelor world?

When Shanti went on to explain from the hot seat how “reality TV is a dramatization of real life” and should not be treated as reality by viewers, the other ladies scoffed. They acted as though she’d admitted to believing some preposterous conspiracy, like “the earth is flat” or “Katy Perry and Zooey Deschanel are actually the same person.” Instead, what Shanti did was point out that the show is heavily edited and overtly produced. I’m not sure how anyone who has consumed even fifteen seconds of this series would doubt that.

Of course, Shanti did not emerge as the ultimate scapegoat, because that was Beauty Queen Brittany. Ah, Beauty Queen Brittany, how I missed thee! Beauty Queen Brittany received her own “Greatest Hits” compilation of sinister clips. It goes without saying bikinis were featured heavily. The words “sexy” and “villain” were used many times in the video, too. The correlation producers established between sexiness and villainy was not subtle. Brittany was effectively branded a femme fatale. I’m not sure when it became a crime to be sexy, but perhaps I’m out of the loop. Remind me only to wear turtlenecks from now on, lest my cleavage garner me “villain edits” in my own life.

After the slut-shaming video, Brit did receive the opportunity to share her perspective with the studio audience. She articulated her regret over her premature departure from the show, declaring she should have stayed for Chris. Obviously no one in the studio audience believed that. The odds have been stacked against Brittany since she first baked protein bars with sugar. Since then, she’s been cast as Satan.

Of course, the most upsetting part of the episode for me was Chris’ interactions with Catie. Catie finally received the opportunity to get closure. Being eliminated from the final three is particularly heartbreaking, because the Bachelor has just met your family, introduced as your prospective betrothed. To reconnect with Chris, Catie wore a simple black dress and cute dangly earrings. (Where did you get those accessories, Catie? Please tell me!) Suffice it to say, she was smoking. It was exactly the sort of “Look at what you’re missing” ensemble one wants to rock when seeing a former flame.

When faced with Chris, Catie spoke calmly and articulately. The Attorney/Meditation Coach told Chris that watching the season back made her realize she could have spent less time talking and more time making Chris feel listened to. Now, I myself didn’t find this apology was necessary. Chris is a man of few words and I’m not sure Catie keeping quiet would have made him into some sort of chatterbox. He’s not one to soliloquize or pontificate. The primary purpose of Chris’ mouth this season has been to make out with women, not to converse with them. Having said that, Catie’s apology was a moving moment of self-reflexivity. Then Noah Cappe ruined it by interrupting Catie’s apology about talking too much by saying, “You know you’re doing it again.” Yeah, he basically told her to shut the eff up.

It’s awfully bizarre that Noah chided Catie for telling all at a special literally called “The Women Tell All.” As the host, doesn’t he want to get people talking? I’m not sure why Noah felt the need to humiliate Catie – to take a strong, successful woman down a peg on national TV – but it offended me. Why should women be chastised for having something to say? Is it because we have the audacity to believe our opinions matter? Would it be preferable if our mouths were purely ornamental? Should they be reserved for lipstick application and blowjobs? I’m not sure whether Noah understood that silencing Catie was problematic, but he owes her an apology. Ignorance is not an excuse to be a douche.

Well that’s it for this installment, folks! Next week is the season finale! It’s Lyndsey V. Mikaela in the famed “final two.” That showdown is sure to be epic, like the movie Batman V Superman, but with better acting. Interpret that comment how you will…