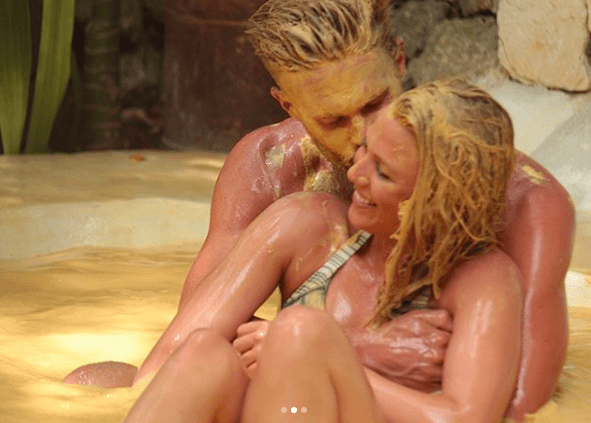 And then there were two…

Chris Leroux has narrowed down his pool of Canadian gals to two contestants, Mikaela and Lyndsey. Who will emerge with the final rose? Who knows! This week’s episode was a dumpster fire of confusing mixed messages, which is exactly how things should be as the season comes to a close. How boring would The Bachelor be if we could accurately predict the winner? No, the addictive quality of this series is that it’s just as confusing as dating people IRL.

This week saw Chris take his special ladies to the Fantasy Suite (i.e., The f-ck Pad, which producers provided for him). I say this without judgment. After months of travelling around, dating people without the luxury of physical intimacy, I think everyone deserves a little nookie. Bring on the luxurious hotel room full of rose petals, condoms and Two Oceans wine!

The first overnight date of the episode went to Mikaela. For some reason, to which I am not privy, said date began on a pirate ship called “The Jolly Roger,” like Captain Hook’s ship in Peter Pan. The start of the date, however, was not particularly jolly. Mikaela is bubbly, beautiful and super committed to Chris; however, Chris still isn’t sold on her. Chris told the cameras he believes that he should want to marry Mikaela, but he worries their relationship lacks the “X Factor” that makes you fall madly in love with someone. I’m not sure why Chris expects love to be like a UK reality TV show, but I would like to remind him the members of One Direction did not win The X Factor when they competed, but together they did become one of the most successful boy bands in the history. So there!

For her part, Mikaela picked up on Chris’ lacklustre love vibes. Everyone’s favourite Winnipegger made it clear that she knows her worth and deserves a partner who adores and appreciates her. Chris, however, was able to assuage her anxieties, and the two eventually hopped off to their shared hotel room. Mikaela even alluded to what might happen during this so-called off-camera alone time when she told Chris it was a “hard yes” for the Fantasy Suite.

Next, it was Lyndsey’s turn to woo Chris with her feminine wiles. She began their date by enthusiastically jumping on him. (FYI straddle jumps are the go-to greeting in Bachelor Nation. They’re like its secret handshake.) Chris seemed pleased to see Lindsey despite the fact that her family likes him even less than most Montréalers like Toronto.

Of course, it goes without saying that Chris broke his pledge to Lyndsey’s family not to take the cute Vancouverite to the Fantasy Suite. To be fair, it was Lyndsey who made the decision to share a room with Chris. The idea that a grown woman’s relatives would try to police her sexuality sounds very Handmaid’s Tale to me, so I for one was happy she followed her heart. You do you, Lyndsey! And if that means doing Chris, I support that!

After all the implied off-camera sex was over, the moment of truth arrived when both ladies met the Leroux parents. First off, I have to say Chris’ mom looks amazing. Her skin is fabulous and I really want to know where she buys her moisturizer. Is it available at Sephora? And how much does it cost?

Returning to the episode, Chris’ parents were obviously more impressed with Mikaela than Lyndsey. It’s not that they didn’t like Lyndsey; it’s that she’s twenty-three and like Lyndsey’s parents before her, the Leroux parents found the age difference inappropriate. Plus, Mikaela had the same hairdo as Chris’ mom, which reminded me of Freud’s theory that all men secretly want to marry their mothers. Chris is making me wonder whether there might be some merit to that hypothesis.

By the end of the episode, Chris found himself overwhelmed by the choice ahead of him. As he explained to his family through tears, he is afraid of commitment. That was the big reveal of the ninth installment of this season. It turns out Chris has only been in long-distance relationships, avoiding true intimacy with a lack of proximity. After realizing, “I think I might be afraid to fall in love,” Chris did what any hero would do on The Bachelor: he sat by himself on the beach watching the tide come in, driving home the theme that this man is alone in the world. The show’s symbolism isn’t exactly subtle.

Well, we’ll get see how things shake down once and for all in two weeks’ time, when Chris gives out the precious final rose. Next week, however, it’s time for “The Women Tell All.” That’s the special where the contestants get together to dish on what really happened behind the scenes. I wonder if things will get “intense” for Chris, if you catch my drift. (In case you didn’t get it, that was a call back to last week’s recap.)

Until next week, dear readers! And remember, stay intense and don’t change yourself for a man!