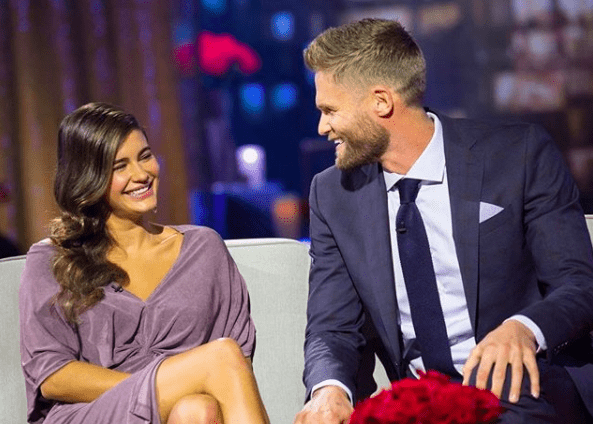 With last night’s finale, Bachelor Canada became one of the most feminist-friendly shows on television. If you’re doubtful of that thesis, you won’t be by the end of my recap! The final installment was all sorts of feminist fun!

What finally snapped me out of my “I Wish I Were In Mexico” reverie was Lyndsey picking up her ukulele. Now, ukulele playing has always felt awkwardly twee to me. Whatever came next, I was prepared for it to be cringey. But oh my God, you guys! The song Lyndsey composed for Chris was phenomenal. This woman should open for Leslie Feist on her next tour. Lyndsey sings like an actual angel brought down to earth for humanity’s edification. I feel like a better person for having been exposed to Lyndsey’s love song. She’s like a blonde Regina Spector. I want her to do a soulful cover of Taylor Swift’s “We Are Never Ever Getting Back Together.”

But even Lyndsey’s siren song could not compel Chris to move to Vancouver. Because Lyndsey is set on the West Coast, and Chris is wedded to Toronto, a wedding appeared out of the question. There were many tears, as the pair realized they were at an impasse.

Chris’ final date with Mikaela was no less bumpy. Actually, to say this date did not go well would be like saying, “Patriarchy is only a little problematic.” Mikaela and Chris’ date made “The Red Wedding” on Game of Thrones feel like an episode of Dora The Explorer.

Mikaela started the day by “confronting” Chris about his feelings for her. The twenty-seven-year-old Winnipegger voiced her concerns about whether Chris was invested in their relationship. The former MLB player went about reassuring his would-be fiancé by saying their “overnight date” was one of the “happiest” times of his life. With a suggestive glance, he also reminded Mikaela, “You looked pretty happy, too.” Yeah, Chris wanted the cameras to know he is good at sex. As an aside, I wonder if he thinks about baseball when trying to put off ejaculation? You know, the way other dudes do? Or as a former Yankee, would picturing home runs be counter-productive? Would it just turn him on more? I’m not sure.

The real low point of Chris and Mikaela’s disastrous date came not when he was alluding to orgasm, but when he called her by the wrong name! That’s right, readers, Chris accidentally referred to Mikaela as Lyndsey. They don’t even look alike, so that was pretty inexcusable. Chris essentially has one job, and that’s to get to know the women the producers assemble for him. I have never in Bachelor history seen the titular Bach perform so badly.

Naturally, Mikaela was offended when her potential fiancé referred to her by another woman’s name. It did nothing to assuage her anxieties about their relationship. Had the show not been pre-taped, I would have road-tripped down to Mexico to save the poor soul. I wanted so badly to give her a hug and say, “To hell with him! Let’s braid each other’s hair and read Judith Butler books together!”

After unsuccessful final dates with both his final two, Chris went shopping for engagement rings with Michael Hill. Not that he ended up needing one. But I’m getting ahead of myself there.

When “Proposal Day” arrived, Chris intended to reject Lyndsey in favour of Mikaela. But then there came the most delicious twist in the history of this franchise! Before he could reject her, she rejected him!

When she met her suitor on the beach where he planned to dump her, a fearless Lyndsey presented Chris with a feminist soliloquy. Lyndsey expounded upon what she wanted in her partner, and her deep desire to find a person who’ll make her happy. Then she confidently declared, “I do not choose you. You are not my person.” Oh snap!

As the SUV drove Lyndsey away in her designer gown, she retained her resolve. Lyndsey remarked upon how “empowered” she felt “to leave on her own terms.” And you know what? I felt empowered watching her. Lyndsey is my new romantic role model. She knows what she needs and will not settle for anything less.

What Lyndsey did on the finale was nothing short of revolutionary. The basic concept of The Bachelor requires twenty beautiful, vivacious women to compete for one man’s affections. The show’s traditional narrative creates a power imbalance, turning the women into passive objects hoping to be “chosen.” The series plays on fairytale tropes of helpless princesses locked in tall towers, idly brushing their hair as they wait for Prince Charming to come rescue them. But last night, something took place that was more magical than a fairytale: a twenty-three-year-old woman rescued herself. She reclaimed her power. Lyndsey didn’t leave engaged to a prince like some sort of fairytale princess, but she did leave like a queen.

When she took control of her own story, when she made it known she did not want to wait around to be “chosen,” Lyndsey emerged as my feminist hero. Even outside of The Bachelor universe, women are sold a princess parable. We are told to invest in makeup, buy better bras, and do a million squats, all in the hopes of attracting a man. What we hear less about is how to decide if a man is worthy of us. It takes a truly mature person to reject that socialization. And to think, Chris worried twenty-three-year-old Lyndsey wasn’t grown up enough for him. Lyndsey isn’t merely ready for marriage; she’s ready to be prime minister of Canada! She’s ready to be president of the freaking world! I hope she writes a feminist manifesto someday!

Ultimately, Chris “chose Mikaela.” This is true insofar as he gave her his final rose, but he didn’t propose. To make matters worse, he announced on the “After The Final Rose” special that they aren’t even “romantic” anymore. This isn’t because they had some sort of falling out. No, it’s because Chris feels he isn’t “ready” to have a partner. Now, there is nothing wrong with not being ready for a relationship; however, if you’re not, why the hell would you elect to be Bachelor Canada? It’s not like Chris was conscripted into reality TV service or anything. The Bachelor essentially has two jobs: to remember the competitors’ names and to get engaged.

Chris defended his failure to deliver on the show’s promise by explaining how hard it is for him to open up to others. “There’s no crying in baseball,” he joked, quoting A League of Their Own. Well, I’m calling bullsh-t. It is uncool to appropriate a feminist cinematic masterpiece to justify one’s fragile masculinity. How dare he disrespect Geena Davis like that! There may be “no crying in baseball,” but there’s supposed to be “no commitment phobia on The Bachelor.”

Even without an engagement, however, I believe this was the best season of Bachelor Canada ever. It gave us no proposals. But it gave us something else: the twenty strong, capable women who began the series competing for Chris Leroux’s affections will now forge their own paths. That’s a different sort of happy ending.

Dear readers, I’d like to conclude this, the last Bachelor recap of the season with the following message: “Stay intense, and never change yourself for a man.” Romantic love is wonderful, but you don’t need a man to complete you.