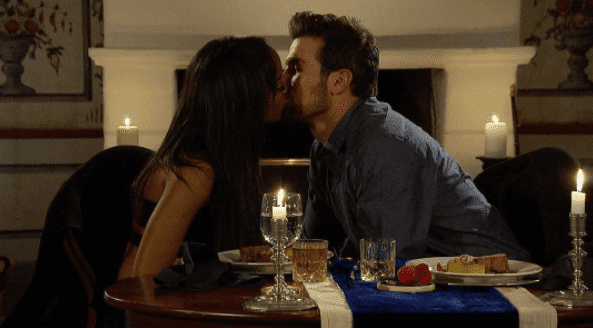 The Bachelorette Recap: Episodes 5 and 6

At first, I was excited at the prospect of ABC airing not one, but two installments of The Bachelorette this week. But after taking notes on four full hours of Bachelorette-related content over a two-night period, I feel having an extra episode of The Bachelorette is, well, a little extra.

Monday’s episode started off where we left off the week before, documenting Lee’s feud with Kenny. Lee, whom we know from his Twitter feed is a racist who thinks feminists are unattractive, is definitively this season’s villain; however, unlike previous Bachelorette villains whose shticks were eating a lot of meat, or – in the case of Nick Viall – wearing scarves, Lee’s much scarier. Unfortunately, Lee’s villainy is anything but innocuous.

Lee continued to refer to Kenny as “aggressive” with no actual evidence to back up the claim. He alleges Kenny pulled him out of a van at one point, but I find this accusation hard to believe. After all, this is a reality show, so pretty much everything is filmed for posterity. An intense scene where one contestant grabs another out of a moving vehicle would have been excellent for ratings. I can’t imagine producers would choose to keep the footage to themselves.

Fortunately, both Lee and Kenny were chosen for the two-on-one. While this gave Lee yet another opportunity to torment Kenny with racist micro-aggressions, there was only one date rose. Rachel’s a savvy woman, so obviously she chose Kenny.

Kenny’s days were numbered anyway. After a heart to heart, he and Rachel decided their connection wasn’t strong enough to justify him being separated from his ten year-old daughter any longer. While I’ll miss him, it was a touching plot development. I could literally watch Kenny FaceTime with his daughter all day.

In other news, Rachel finally had a date with Jack Stone. To me, “Jack Stone” sounds like the title of a movie starring Tom Cruise. But it’s not; it’s the name of an actual human man who works as an attorney in Texas. Given that they are both Texan attorneys, I was convinced Jack and Rachel would get on like a house on fire. He was one of my frontrunners. Well, he was until I saw them on a date together.

Jack and Rachel spent the day learning to do a dance called “shagging,” because everything on this show has to be a double entendre. Unfortunately, off the dance floor, Mr. Stone turned out to be a little…creepy? When asked by Rachel what he would plan for them, were they to go on a date in their home state, he replied that he would take her home and lock the door. I’m sure he didn’t mean it this way, but it sounded like he wanted to turn Rachel into Brie Larson’s character from Room. That doesn’t make you sound like marriage material to me. Jack was sent home directly from their date.

This week also saw a change of scenery, as Rachel got to escort her caravan of man meat to Norway, then Denmark and Sweden. Given that the previous season of The Bachelor featured a trip to Finland, I want to know how much money the Scandinavian Tourism Board paid ABC for all this publicity.

This voyage to Northern Europe involved a lot of Viking-themed activities. There was a weird Viking martial arts competition that took place in a remote field. This required Rachel’s assembled suitors to change into Viking apparel and fight each other with only their feet. They also rowed a Viking boat. Suffice it to say, the cosplay got real.

Other highlights of this eventful week included lots of making out with chiropractor Bryan, whose tongue seems like it’s really gaining traction in Rachel’s mouth. I think he’ll go far. It will be interesting to see if his tongue also excels in The Fantasy Suite, if you know what I mean.

Later, Will was sent home for being a dud of a date. On what was supposed to be a sexy daytrip to Sweden, he basically acted like my dad with an Eye Witness Guide. Instead of flirting in a way that would make him ship him and Rachel, he kept talking about shipyards for some reason. Josiah the prosecutor was also eliminated, though I must say he looked lovely in the unitard he donned for that weird handball challenge.

Well, that’s a wrap for this week. Even if Rachel doesn’t come home with a husband, she can at least say she’s seen all of Scandinavia now!