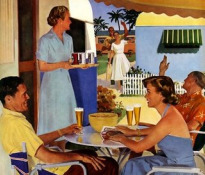 Back To (Beer) School

And now let’s talk about beer. Beer, that quintessential Canadian and summer beverage, often gets a really bad wrap. And it’s no wonder; the hopped-and-malted liquid is continually saddled with ridiculous stereotypes: who hasn’t seen that ubiquitous frat boy shot-gunning a can and then crushing it against his all-too-meaty forehead? Or how about the balding middle aged fatty stripped down to his stained ‘beater and balancing a bottle of Bud on his belly as he eats an overflowing frankfurter, watching either mud wrestling or some other televised “sport”?

Another aspect that mires beer’s reputation in the sludge of low-brow culture is the commercialized schlock that gets pushed on unsuspecting consumers. Not the biggest fan of beer? Maybe it’s because some brewers pour all sorts of shit into their batches like preservatives, artificial flavours, colours, head retainers, and others of their no-good ilk. They also make the beers in such huge quantities that little to no TLC goes into the brewing process.

But have no fear! Beer doesn’t have to be bad! In fact, there’s a tonne of beer out there that’s both ab fab and accessible at your local Beer Store or LCBO!

Like fruity flavahs? Try an Ephermere Pomme , a white ale with a sweet-tartiness like Granny Smith apples. There’s also Fruli , a Belgian wheat beer mixed with strawberry juice. For something a little tarter, try Mort Subite Kriek or Framboise two spontaneously fermented Belgian beers which are then blended with cherry and raspberry juice.

Looking for a deliciously quenching patio beer? Give the Belgian-style wheat beer Blanch de Chambly , a delicately flavoured bevy with some delightful notes of orange and coriander. You could also give the German amber-coloured wheat beer Schneider Weisse a try for a super refreshing fix. For a good ol’ fashioned German wheat beer, give Weihenstephaner Hefeweissbier a shot; those guys run the oldest brewery in the world, so they must be doing something right. The beer itself is fabulously refreshing and has got a fruity-spicy aroma and flavour.

Anyway, chew (or maybe sip?) on those suggestions before you write off beer all together. Beer, too, can be just as fulfilling a beverage as any of its alcoholic compatriots if you just give it a chance!