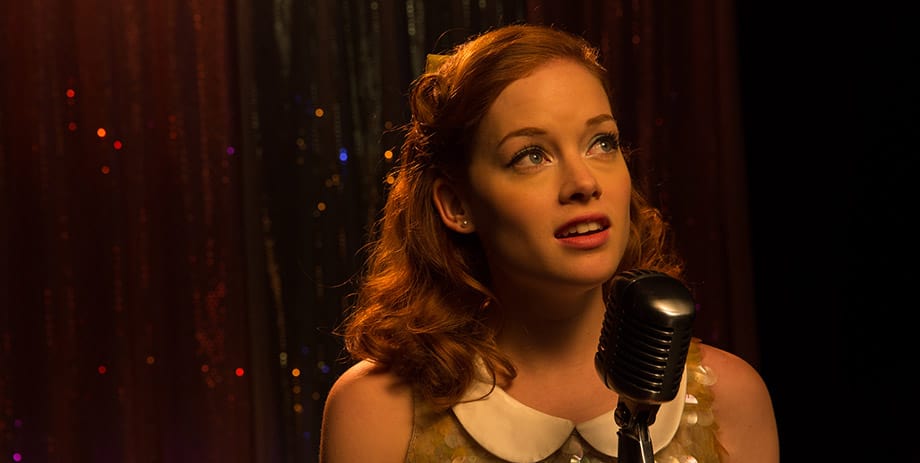 Bang Bang Baby Is a Glorious Mutant of a Feminist Film

Jeffrey St. Jules’ new movie Bang Bang Baby is a lot of things. Despite the fact that it’s only his feature film debut, St. Jules is already something of an auteur, with his own unique perspective. The film is part homage to campy, stylized 60s musicals like Bye Bye Birdie. It’s also part science fiction/mutant horror movie. But one thing I can say for sure is that it’s 100% a feminist-friendly coming-of-age flick.

The film is set in the early 1960s in a tiny town in rural Canada. Our protagonist, Stepphy (Jane Levy), is a 17-year-old aspiring singer with hopes of making it big. Like many Canadians before her, Stepphy dreams specifically of enjoying American success in New York City. This is perhaps the most realistic part of an otherwise deliciously imaginative film.

Stepphy isn’t just a dreamer; she has real talent, and oodles of it. She is so skilled a songstress that she even wins a singing competition called American Ingenue. With the win comes the chance to record an album in Manhattan. It looks as if Stepphy is on the fame fast track, until her alcoholic father forbids her from going and goes so far as to burn her acceptance letter. According to Dad, because he is old and sick, it is Stepphy’s job as a dutiful daughter to stick around and look after him, her dreams be damned!

Stuck in a place she finds stifling, Stepphy now has little to do but get drunk and hang out with Fabian, the town creep. After being date raped, however, two extraordinary things happen: firstly, her pop idol Bobby Shore (Justin Chadwin) magically shows up in town; secondly, Stepphy, and everyone else in her small town, begin to mutate.
Can Stepphy become a star while becoming a mutant? It’s a fresh question, and Bang Bang Baby is a fresh movie. It takes a narrative we are used to – the story of a beautiful small town girl with big city dreams, and makes it new. This film reaches what I would call Peak Meta. Because it combines the traditional American musical genre with a sci-fi conceit where everyone is mutating, the movie itself becomes a mutant work! Simply put, IT BLEW MY MIND!

Ultimately, this film delivers some fabulous imagery on what it means to be a self-doubting teenage girl. Its high-concept plot manages to express something that is ultimately very relatable: coming-of-age as a woman under patriarchy, where men are constantly trying to dominate your life and your body, is bloody difficult.  In the end, St. Jules’ vision produces easily the most creative film I have seen all year. No wonder it won the City of Toronto Award for Best Canadian First Feature at last year’s Toronto International Film Festival! If you’re looking for a thoroughly original film to screen, I cannot recommend it enough.