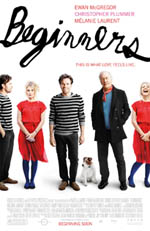 Oliver (Ewan McGregor) is a thirty eight year old graphic artist. He is also a sad sack. He is single, lives alone and has a cadre of hip, quasi concerned friends. Sounds like the perfect beginning for yet another irritating Manic Pixie Dream Girl movie, right? Wrong. Beginners, directed by Mike Mills, offers us a touching multi-generational love story that subtly reinvents the wheel.

Based on the director’s own experiences, the story centers around Oliver’s relationship with his father Hal (Christopher Plummer), who following the death of Oliver’s mother, comes out as gay. With impeccable comedic timing, and his ability to make us feel a man’s coming-into-his own, Plummer plays Hal effortlessly.

It’s through Hal’s relationship with a much younger man that Oliver begins to see what love really looks like. Beginners shifts through time, never lingering too much on a moment, allowing the viewer to fill in some gaps.

Through flashbacks we see the lukewarm relationship between Hal and his wife, Georgia, as well as glimpses of Oliver’s childhood. The entire family senses that something’s amiss, but given the repressive climate of 1950’s/1960’s America, Hal’s sexual orientation must remain a secret.

This is something that Mills stresses and emphasizes throughout the film. At times, Beginners can get a little preachy, and feel a little too much like a message movie–but its an important message that needs to be said.

Commendable, is Melanie Laurent’s turn as Anna, whom she saves from the clutches of wide eyed MPDGdom. Intentionally or by accident, Anna feels a little like a French Annie Hall  lite at times (don’t be surprised if Laurent gets cast in a Woody Allen movie), but Laurent imbues the character with a mysterious soulfulness that turned a potentially one note antagonist, into a fully fleshed out character. More Eternal Sunshine of the Spotless Mind, less 500 Days of Summer.

Overall, if you’re looking for a heartwarming, ensemble piece that is more than just another boy meets girl love story, Beginners is for you.