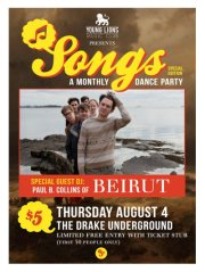 Beirut is guest DJing Songs, A Dance Party at The Drake on August 4th, and it's the coolest thing ever

If you thought you would know what to expect when Beirut’s Paul B. Collins got behind the decks, you were wrong. Beirut’s eclectic sound is a unique blend of nostalgic European folk music and modern songwriting that doesn’t sound quite like anything else, and the same will be true for Collins’s DJ set: he’s offering “an eclectic mix of Hip-Hop, Brazilian, Synth-pop, World Music, Motown, etc.”

This is extremely promising. Get excited for the coolest Thursday night Toronto’s seen in a while.

Cover is $5, but the first 50 people with ticket stubs from the Beirut show get in free. This will be crazy bananas packed, so get there early ready to DANCE!