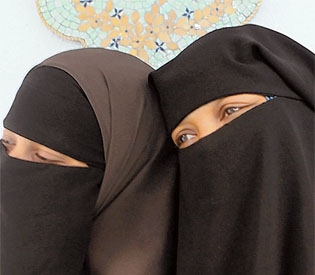 Mary Apick remembers an Iran that was “exciting, thrilling, democratic…a society where women had freedom.” In fact, as a young woman Apick was an actor on one of Iran’s top televisions series, Octopus; she likens it to Saturday Night Live. Hard to imagine, isn’t it?

A teenage trendsetter, what she wore on TV was quickly adapted by young Iranians -be it short skirts or a bold hair-do. That was in the seventies, prior to the revolution. By 1979, Apick had moved to Los Angeles, “I decided I wasn’t going back, I would not agree to live in such a corrupt society. I wouldn’t have survived; I’m very outspoken.”

She refers to her childhood and youth as “…vital, beautiful. an amazing time. It was the golden era in Iran, the Paris of the Middle East.” But then everything changed, “…half the nation went silent, they put covers on women and took their rights away.” Since then, Apick has devoted her life to acting as a voice for women’s rights, building awareness through theatre and film and courageously speaking out against the tyranny and abuse of Iranian women.

In Toronto this Saturday her play, Beneath The Veil, will be performed at University of Toronto’s MacMillan Theatre. The idea for the play was rooted back in 1989; Apick was breastfeeding her son when she received a call informing her that a close friend’s daughter had committed suicide after being punished for carrying photos of Michael Jackson to school. She was just sixteen, “I knew I was going to do something with that story but I didn’t know where or when,” Apick says.

Collecting stories for years, it was finally the death of Canadian-Iranian photojournalist Zahra Kazemi in 2003 that prompted Apick to write the play. “I very much identified with Zahra, I’m younger than her but I knew she was outspoken, she wouldn’t take no for an answer, she was a woman who traveled out of her own curiosity to find out what was going on. It shook me.” Beneath The Veil is dedicated to Kazemi.

Kazemi was in Iran taking photographs outside of Tehran’s Elin Prison, when guards approached her and demanded she hand over her camera. She refused and instead tore the film up in front of them. This gutsy response got Kazemi detained, beaten, tortured, raped and finally killed within the prison walls. It’s a horrific story that got worse when the Canadian government tried to retrieve the body and was refused by Iranian authorities.

Although Kazemi’s death was the trigger, it was years of built up frustration and the vast collection of stories that enabled Apick to pen the play in a mere three weeks, “All these atrocities that women have faced in Iran, the concept of the veil, taking their rights away, the suffocation of the societies and learning more and more…. I decided I was going to do a play in English to create more awareness for a western audience, ”

Beneath The Veil is told from the point of view of an American reporter, “She’s writing, falls asleep and all of these characters come alive, they each have a story to tell and she gets involved with all these stories. Ultimately all these stories become her voice and unanimously the voice of women in the world.”

Although the play provides audiences with an objective vantage it is obvious that Apick has a strong stance about the veil, “What woman, what human being would want to do that? Would any woman who has lived and been raised in a normal civilized modern family would choose to do that on her own?”

Beneath The Veil doesn’t provide us with answers but Apick hopes that audiences are inspired to, “Think about it and then tomorrow see what you can do to make the world a better place for the future of our children. No matter how idealistic that may be, each of us are responsible – particularly if we have families and children to do something right.”