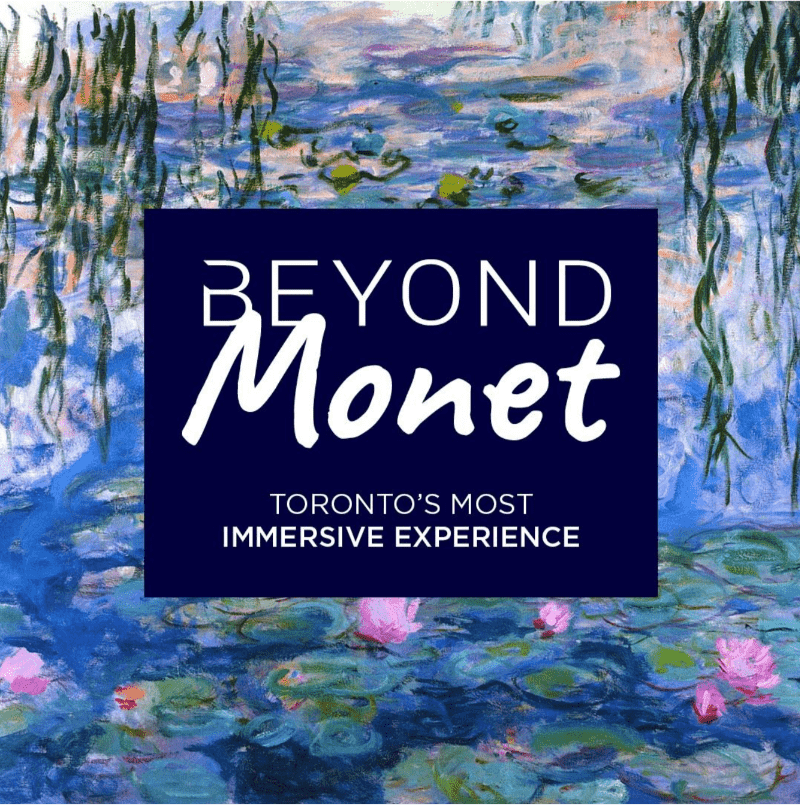 Tickets are now on sale for Beyond Monet, which will have its world premiere in Toronto starting Thursday, August 5.

The immersive exhibit will showcase more than 400 of the famous French painter’s impressionist paintings, including his most recognizable and beloved Water Lilies series, brought to life in 360 degrees of cinematic imagery that will cover floor to ceiling.

“This exhibition is beyond anything you’ve seen. It is a truly multi-sensory immersive experience that offers guests a dreamlike, romantic journey through Monet’s world of classics,” says Jeffrey Latimer, Producing Partner, JL Entertainment. “Sharing this unique spectacle with Canadians for its world premiere is quite an honour for us.”

During the past year, the Immersive Van Gogh exhibit was likely the most well-attended event in Toronto that easily accommodated social distancing measures. Surprisingly, Beyond Monet is not affiliated with the people who brought us Van Gogh, but it’s hard not to draw comparisons: it’s immersive, it’s taking over a gigantic space in downtown Toronto, and both art experiences project well-known masterpieces, by French artists of the same era (although critics would argue that one is an impressionist and the other a post-impressionist).

When Immersive Van Gogh was first announced, many were skeptical as to whether projected art could inspire a sense of awe, but that exhibit proved that it could. Toronto Star called it “Thrilling!” and CTV described it as “A completely new way of encountering art.” Immersive Van Gogh was enjoyed, and continues to be enjoyed, by thousands.

In an era where so much has been cancelled, this way of experiencing art has given people an opportunity to do something different. Beyond Monet promises to be just as pleasurable.

“This experience is all about guests embarking on a multi-sensory journey with Monet, through his artworks, in search of light,” says Mathieu St. Amaud, Creative Director, Normal Studio. “Monet captured the essence of the natural world with his strong colours and his short, bold brushstrokes. Constantly searching, with legendary passion and ardour, he was able to depict the ever-changing shifting of light. Our intent with this experience is to not only share Monet’s fascinating vision of the world but for audiences to rediscover his work from new and surprising perspectives.”

Ticket prices start at $39.99 for adults and $29.99 for children. Beyond Monet will take place at the Metro Toronto Convention Centre, 255 Front St W. More information and tickets at www.monettoronto.com.