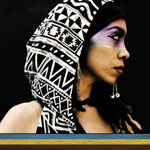 Given how many influences are evident in their music, a listen to Blue King Brown is like taking a road trip from Africa to Australia before stopping by Santana’s house. The Melbourne-based band blends the sounds of Afro beat, reggae, soul, funk and urban roots to create multi-dimensional, worldly music that is best described as an experience. In town for CMW, this is one band you’ll want to check out this week!

SDTC: What’s the story behind your band name?
Blue is the blues – the foundation of so much of the music we listen to in today’s world.
King is strength and power, but through music.
Brown the groove, roots and soul.
Our colours, our flag – blue, gold and brown… Blue King Brown.

What three people or groups, musicians or otherwise, have had the biggest impact on your music?
Fela Kuti, Bob Marley and the Wailers, Santana, Janis Joplin – that’s 4… there’s so much more!

Anything you’d like to see or do while in town for Canadian Music Week?
I want to meet and connect with other artists and industry folk… and also party a little, we have a birthday to celebrate in our band while in Toronto!

Being as socially aware and active as you are, what’s one cause or charity especially close to your heart?
The environment, the health and well being of our planet and our people worldwide. There are many great and focused groups of people organising and centralizing around important issues. Get connected with Avaaz.org, MoveOn.org, Seashepherd.org to name just a few.

What can you tell us about the music scene in Australia?
Australia has a long standing love of rock and pop music, but it’s becoming more open and versed in more of the international styles we play like reggae, roots and dancehall. There’s also a wave of folky pop going on at the moment.

Can you recount the moment or time period in your life when you decided that you wanted to be a musician?
I was 13 years-old and one day picked up a guitar that had always been sitting in the corner of our living room. I asked my mother to teach me something and she showed me 12 bar blues. From that day forward I fell deeply in love with the blues, started learning like a maniac and knew from that point that I wanted to be a guitarist, a musician.

You’ve opened for some pretty legendary acts! Anyone you’d like to share the stage with that you haven’t already?
Wyclef Jean, Manu Chao, The Roots, Femi Kuti, Stevie Wonder… lots!

When can we expect a new album?
This year!