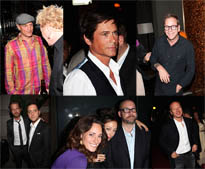 In its second year, Strombo’s Hazelton Takeover has grown to become just that. It could be the handy Yorkville location but more likely the fact that the host of George Stroumboulopoulos Tonight gets mad respect from celebs, like Bono, for his sharp interview skills and down to earth demeanour.

What started as a CBC booze fest kicked up about ten notches when Mr. Don Draper appeared and publicists could be overheard yelping, “Jon Hamm just touched my ass.” In three inch heels, I towered over the Mad Men star and although our eyes never met, I did receive a “Hi Jen!” from award-winning director & writer Paul Haggis (Crash, Million Dollar Baby). Earlier that eve, Haggis held court at the Artists for Peace and Justice fundraiser, an organization dedicated to relief work in Haiti, at Ame’s Toro After Dark.  And speaking of famous philanthropists, we weren’t surprised – but definitely delighted – that Bono made an appearance at The Hazelton too, along with bad boy Johnny Lydon (Rotten). And then it became a game of A-list dominoes: The never aging Rob Lowe, weathered Kiefer Sutherland, an alarmingly bronzed Gerard Butler, McDicks man Morgan Spurlock (Supersize Me) and happy-go-lucky Paul Giamatti who fumbled in after the premiere for, The Ides of March. Rapper Kardinal Offishall mingled with K’NAAN and yoga man Woody Harrelson made a loud entrance with his colourful shirt and paper boy cap.

The crowds outside were densely packed and screaming at anyone exiting a chauffeured Cadillac, while inside it-bloggers were likewise giddy, “Dear everybody in highschool who made fun of me for being a computer nerd and now works at a bank: HA” tweeted @LaurenONizzle. Yep, we’ve come a long way from Corner Gas; the Canadian Broadcasting Company has never looked this cool.