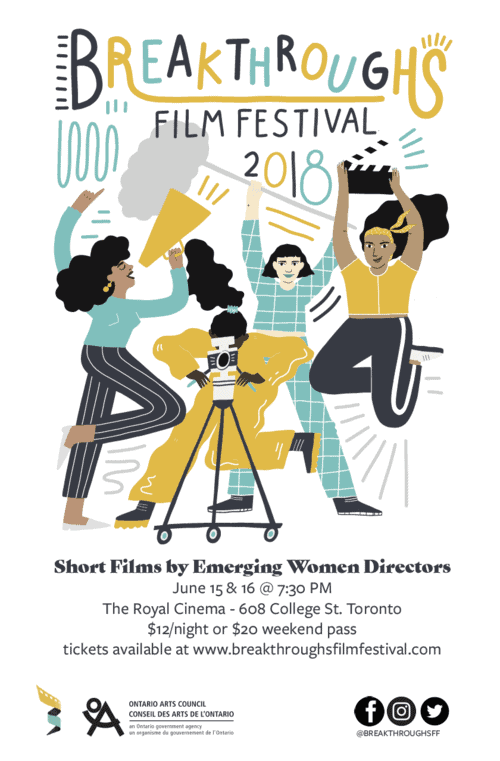 Breakthroughs, the only film festival in Canada dedicated to showing short films by emerging female filmmakers, is back for its seventh year! Running June 15 and 16 at the Royal Cinema, this year’s fest features nineteen outstanding short films from nine different countries. The roster also includes four Toronto-based filmmakers.

For years, Breakthroughs has worked tirelessly to foster an industry that recognizes women filmmakers. We are so stoked to check out this year’s lineup. Here’s what’s in store:

Paulette in Paris, Directed by Isabelle Sophie Arouë (FRANCE). On a summer afternoon, Paulette, a young girl, sees Michel, a 30-year old pickpocket, steal a wallet and decides to follow him. The two embark on a journey across the streets of Paris and form an unlikely friendship.

Wonderland, Directed by Tiffanie Hsu (USA). Twelve-year old Adeline Tang struggles to navigate America’s adult playground and keep her mother’s gambling under control, all for the promise of that perfect family Christmas holiday once her father arrives. But as the days unfold, Adeline realizes that growing up might not hold all the excitement she’d been hoping for.

Little Brother, Directed by Dominique Van Olm (CAN). On the edge of adolescence, Dexter visits his sister in the city for the first time. Little Brother examines the reawakened relationship between two siblings with a 13-year difference as well as the struggles of a young boy exploring a new city and the newness of adolescence.

Zaya, Directed by Susanne Serres (CAN). Zaya is a contemporary dancer who has just realized the love for her dance partner Nadege. But first she must realize the love for herself, overcoming her fears and opening up about who she is to her mother.

Jessica Jessica, Directed by Jasper Savage (CAN). Jessica Jessica is a grown up coming of age story. The funny/sexy/sad/truth of how hard it is to be a woman who wants to settle down, but won’t settle.

Vitamin C, Directed by Guðný Rós Þórhallsdóttir (ICELAND). Two young girls collect items for a charity raffle but they’re really spending the profits on what they love the most – Vitamin C effervescent tablets. When an elderly lady clocks on to their scheme, a game of blackmail begins.

Dear Hatetts, Directed by Kerry Barber (CAN). What happens when a woman is accused of lying, and the unimaginable effects that a disease like endometriosis can have on a relationship. Told in a simple, straight-forward and heart-breaking style, the “liar” (the filmmaker herself) tries to explain to the family of her lover.

The Last Dream, Directed by Noemie Nakai and Carmen Kobayashi (Japan). In a future where people have lost the ability to dream, a company has made a business out of generating perfect dreams that would satisfy as many clients as possible. Khalil, a model employee, had always been one of the top performers until one day, his dreams are no longer to the liking of the company…

Laundry Day, Directed by JJ Neepin (CAN). A dream while you sleep can have a possible deeper meaning than you think at the time. JJ retells a dream her late grandmother had when she was a young woman.

Night, Directed by Joosje Duk (USA/NETHERLANDS). When Sue’s cousin Genelva visits her from Suriname, they want to go out to a fancy club with Sue’s two best friends. But after having an unpleasant encounter with the club’s bouncer at the door, the course of their night changes completely.

Amaretta, Directed by Hana Maeorg (AUS). A coming-of-age comedy about a young girl who, for the first time, realizes that the world isn’t as fair for girls as it is for boys.

Living Here, Directed by Sarah Baril Gaudet (CAN). Living Here is a story made of solitude and wind told with the poetry of Nunavik’s stark tundra and the beauty of young Martha’s words.

Nana, Directed by Ali Kellner (CAN). Animated with perfection, Vera Reiner was taken from her home and family in Budapest at a young age in World War II. Taken as a prisoner, she recounts the story of how she survived along with thousands of other women during the Nazi occupation of Austria and Hungary in 1944. This was produced by Sheridan College in Toronto.

Girl Eating Banana, Directed by Natasha Babenko (USA). While a young woman is auditioning for the role “girl eating banana” the unexpected discovery within the banana pushes her psychological boundaries to limits.

Work, Directed by Claire Allore (CAN). Two sex workers in Toronto share experiences relating to race, gender, and emotional labour in their work.

I Love My Robot Boyfriend, Directed by Sariah May (USA). Shelly, a teen-queen science extraordinaire, plagued by the elusive and tantalizing idea of true love, sets out to create herself the perfect Robot Boyfriend. When she succeeds, she must come to terms with the consequences of his so-called “perfection.”

Vrede, Directed by Lodi Matsetela (SOUTH AFRICA). Set in apartheid South Africa in the ‘60s the film follows the life of Ntombizodwa, banished to live in the far flung town of Vrede, sent there to serve her house arrest sentence. Everyday becomes an exercise in anticipating the next modus of harassment the apartheid security police will use on her.

Rosario, Directed by Marlen Rios-Farjat (MEXICO). Rosario, a housewife who is the caregiver for her ill husband, silently struggles between her responsibilities and her desire for a more fulfilling life.

The Things You Think I’m Thinking, Directed by Sherren Lee (CAN). A black male burn-survivor and amputee goes on a date with a regularly-abled man. After the bar, they go back to his apartment where he faces his demons as he attempts to experience intimacy for the first time since his accident 10 years ago.

Breakthroughs runs June 15-16 at the Royal Cinema (608 College St.). Tickets are $12 for one night or $20 for the two-night festival pass. Purchases can be made here or at the door.