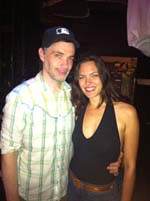 Buck 65's unique performance blows us away at SummerWorks

Wednesday, August 15, 2012. Buck 65. The Theatre Centre. Quite possibly THE music event of the festival. I’ve heard way too many great things about this experimental, conceptual hip-hop artist to miss out on a chance to hear him live at SummerWorks.

I rushed in late, and breathless, taken aback by the absolutely packed house, and the anticipation that hung in the air. Cheers erupted when he walked on the stage, and after a nervous start (he was performing brand new material for the first time), Buck 65 and back-up vocalist Francesca Anderson (see photo) were at it. To be honest, I didn’t know exactly what to expect in terms of performance art, but I was blown away by how thoughtfully it was all executed. Combined with Buck 65’s skillful MC’ing, his mastery of both the decks and the MacBook, and the performance aspect, I couldn’t ask for anything else.

Standout moments include a song about the end of a Parisian love affair – the emotion visible on the MC’s face as he asked his former lover if she would even recognize his face in a police lineup. At one point in the performance, a large section of the audience stood up, choir books in hand, and sang back-up, to the surprise and delight of the entire crowd. For a couple of the songs, a performance artist lip-synched to Buck 65 while he rapped in the shadows. There was an impromptu dance party on stage, paper planes launched from the balcony, and during the closing number, hundreds of white balloons were released into the crowd.

Let’s just say that after that performance, I would definitely recognize Buck 65’s face. Anywhere.