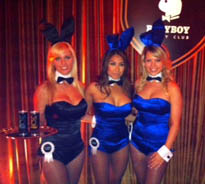 Yaletown’s finest were out in full force to celebrate the Playboy Energy drink launch. The pretentious, invite-only-secret-location party was the must attend event in town. And it lived up to the hype surrounding it.

The evening began with guests meeting at Opus Hotel’s 100 Nights, where they were greeted by iconic pink bunnies. As the Energy drinks began to flow, the party swung into full force. Guests began to wonder where the secret location of the real party was. They would soon find out.

By 9pm the limo buses had arrived to shuttle guests to the elaborate party. Hundreds of guests emerged on Sugar Studios in East Van and before we even entered the building we were greeted by two Rolls Royces. Clearly this was not your average party. Once inside it was sensory overload. Bunnies rushed to greet you with champagne cocktails and cans of the Energy drink. Behind them more bunnies teased and tempted you to take photos with them. Beyond them it was hard not to notice the nude photo shoot. Topless girls in sexy lingerie rolled around on shag carpets while Karolina Turek clicked away. The seduction of the party left you in a trance as guests floated to the next room.

The next room was just as stunning as the entrance. The theme of the party was beginning to emerge as 60’s themed girls primed and prepped in front of large vanity mirrors. As guests ventured deeper into the party they were encouraged to indulge in the open bar that overflowed with every liquor imaginable. I was beginning to understand the exclusivity of the event.

The further guests moved into the party the more elaborate it became. In the lounge area bunnies played chess with guests while yet another nude model lay on the ground. A live art installation included the topless girl as the artist painted her, the floor, and the wall beside them. Just when you thought the party could not get any better someone informed me of the second level.

As I sipped on my red wine, brandy, Energy drink concoction I made my way up to the heart of the party. This is where all the beautiful people were. The entire floor had been transformed into a 60’s style dance club. DJs spinning in front of a gold chain back drop, male and female go-go dancers oozing sex as they danced in their party of one. Saxophonists, bongo drummers, and so much more filled the room with excitement. Even the giant Andy Warhol of Playboy Energy cans somehow made the room more exciting.

Tickets now on sale for the Andy Warhol exhibition at AGO