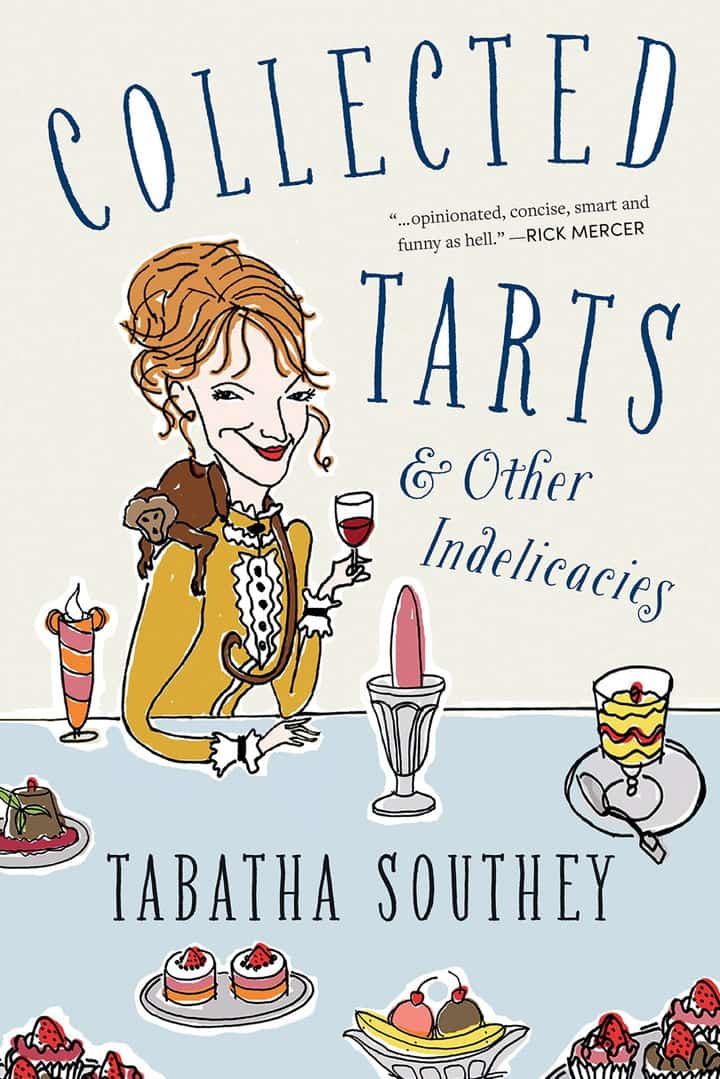 Tabatha Southey recently became the talk of town when The Globe and Mail fired her and fellow long-time columnist Leah McLaren. Southey had toiled for The Globe and Mail since I was a teenager, yet Globe Editor-in-Chief David Walmsley felt it was appropriate to fire her via email. That’s only a modicum more respectful than firing someone via SnapChat.

Like many women writers, I myself was dismayed by the Globe’s impersonal approach to terminating two female columnists. I was also appalled that these firings meant male voices would be even more in the majority at Canada’s self-identified national newspaper. And so, I wondered, what could I do to show my solidarity? How could I, Sarah Sahagian, of the East End Toronto Sahagians, express my distaste for The Globe’s unsavoury decision?

After careful contemplation, I concluded the best way to support a woman writer is to read her work. As such, I was delighted to receive an advanced copy of Southey’s new book, Collected Tarts and Other Indelicacies. When it arrived in the mail, I placed it lovingly on my nightstand, right underneath the Liona Boyd autobiography I was finishing. “I shall read and review Southey’s book for feminism!” I declared. And by golly, that is what I did.

Upon cracking it open, I discovered Collected Tarts is an amusing anthology of Southey’s most famous essays. Her pieces tackle a plethora of topics, from satirical takedowns of Stephan Harper’s politics, to meditations on the rise of oversized handbags. If I had to hazard a guess, your pet personal peeve is probably one of the gripes Southey tackles within her book’s 342 pages.

As a reader, what I admire most about Southey is how she proves feminists can care about multiple topics simultaneously. The anti-feminist argument that we should all “shut up about things like manspreading because rape is worse” loses all power when feminist writers prove that caring about casual sexism is not mutually exclusive to caring about more blatant misogyny. The fact that Southey devotes an entire column to poking fun at the ubiquity of cumbersomely large handbags does not prevent her from tackling “A Twisted Trump Dystopia” in another column. Simply put, this dame has range. What’s more, because she’s a humour writer, Southey manages to skewer her targets while bringing a smile to your face. In other words, she’s a total BOSS.

Admittedly, Southey’s humour can be polarizing. You either get her or you don’t. The popular journalist is nothing if not an absurdist. This author’s offbeat, post-modern comedy leads her to make unorthodox jokes about hamsters and bear urine. But, judging by her 50,000+ Twitter followers (a number that makes me green with envy), it’s obvious countless people do enjoy her jokes. So why not give Southey’s Collected Tarts a try? She might just make you laugh until you cry…

Tabatha Southey’s new book was released by Douglas and McIntyre on September 16th. The time has come to send a decisive message to The Globe and Mail, a strong message about the value of women’s voices. Let’s spend our hard-earned lady dollars on making Southey’s anthology a hit! Are ya with me?