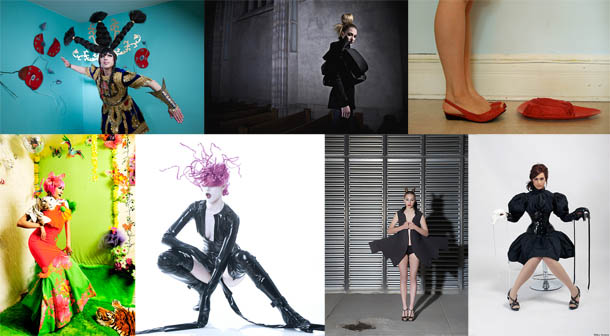 by Olga Barsky
It’s hard to believe that Alternative Arts and Fashion Week, otherwise known as [FAT], is celebrating its fifth anniversary, appropriately titled MADE WITH LOVE. Brainchild of Vanja Vasic, [FAT] is truly one of our favourite events in the city and, one that carries with it a slew of fond memories. From Lena Love strutting her stuff in Kirsty McKenzie’s wild creations (she’s back!) to Jen McNeely and myself in silver onesies and knee socks handing out condoms with the Candy Coated Killahz kickin’ it on stage…and Anna Ross’ surreal series of majestic portraits or the entire crowd busting out in a dance party on the runway after a showing. Bottom line -we can’t wait to partake in the beauty, madness and excitement that has come to epitomize [FAT].

Though not unexpected, it has been amazing to witness [FAT] grow and become recognized as one of the major arts and fashion events in the city. In fact, this year, the fest has been extended to five days and takes place between April 21st and 25th in its spanking new locale, Studio City in Liberty Village. A welcome change, seeing how we couldn’t help but get our heels stuck in the cobblestone while trekking around the Distillery District in previous years.

Taking advantage of the new space, Vanja has come up with another dimension to the event called “Dressing Rooms”, where artists transform seven dressing rooms into art-based installations. As well, for the first time ever, there will be a sample sale that’s open to the public on the last day.

The rest of the event is structured in much the same way, where every day brings with it a new theme, vibe and set of talented artists. We begin the week with LONGING. The line-up of the day is a testament to Vanja’s hard work and perseverance. Not only does it include some of the top designers from across Canada showing their recent work, but also several international artists from the UK to the Netherlands.

Subsequently, we LUST after the second day with local favourite DJ Daniel Wilson spinning the night away. His music choices and his tremendously creative outfits never disappoint. We’re equally excited for Starkers Corsetry by Dianna Dinoble. Not to mention how much we can’t wait to see what Evan Biddell has cooked up. Fresh off his very successful showing at LG Fashion Week, we can only wonder what one of Canada’s most innovative designer’s has in store for us!

Next comes RAGE, which no self-respecting love affair can do without. Crowd favourite Heidi Ackerman is showing, as is the Ryerson School of Fashion. (Fun fact: Vanja started [FAT] while she was still in school, at Ryerson no less!) Next we get the photo series Haute Goth by Lynsie Roberts, one of our favourite up and coming fashion photographer’s in the city. Later in the night, Toronto band Magenta Lane is set to take the stage. These remarkably talented (not to mention smokin’ hot) ladies are currently on tour with Sloan.

And what better way to end the week then with JOY. Kirsty Mckenzie is showing her collection, in fact, two of our favourite drag queens Devine Darlin and Cassandra are walking for her. Last but not least, yours truly will be showing a collaborative photo series titled “Dress Up” between myself, drag queen extraordinaire Donnarama and photographer/filmmaker Joyce Wong.

Designer? You should apply to Fashion Art Toronto’s 2022 Fashion Week