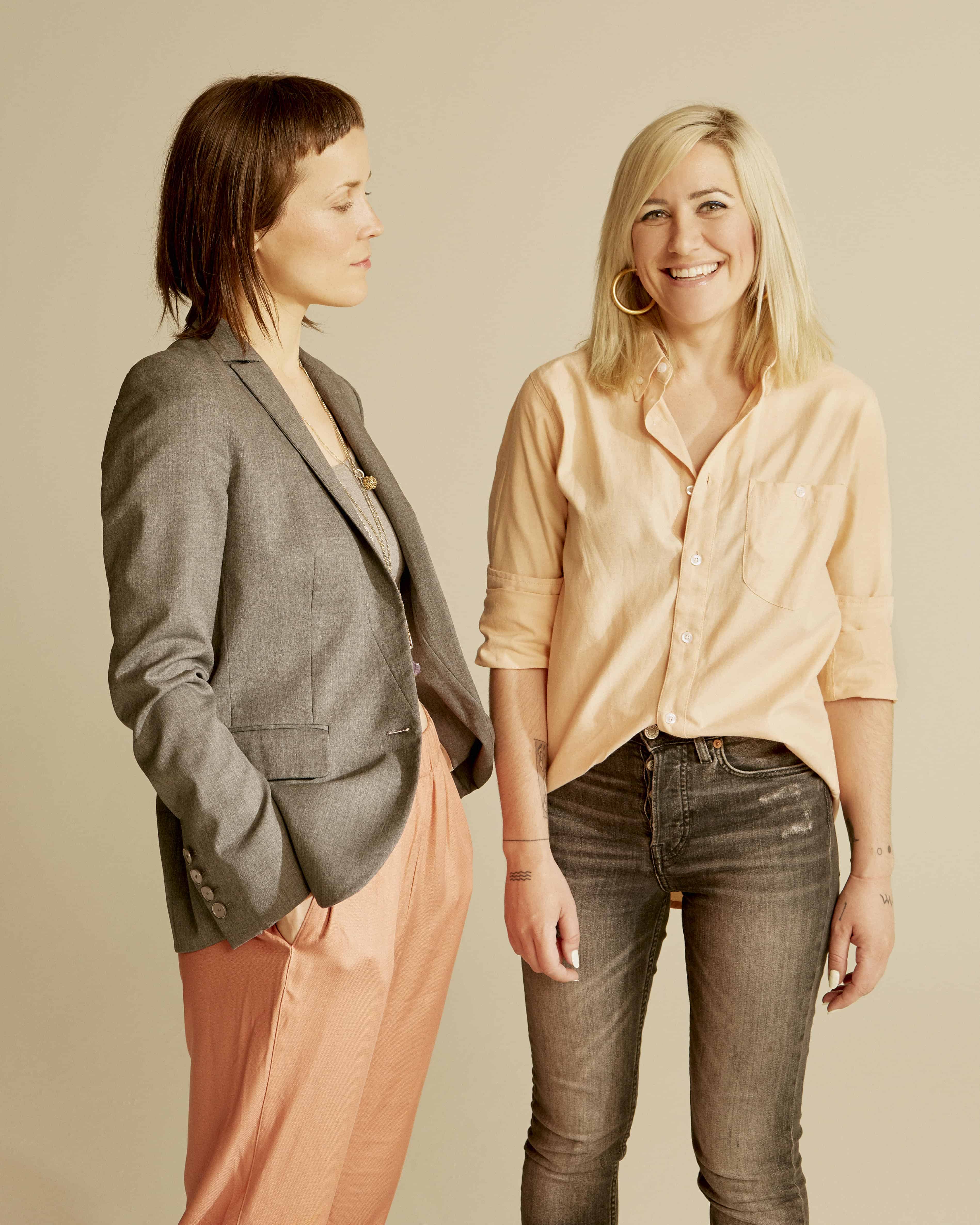 TRU LUV makes interactive experiences for your phone that leave you feeling calm, connected, and invigorated. This week, they launched a digital companion called #SelfCare, a game-like app that allows you to reset, recharge and realign. #SelfCare aims to replace mindless scrolling (we’re all guilty) with mindful meditation.

The setting for #SelfCare is simple: In your virtual bedroom, you can select calming tasks that generate satisfaction and uncomplicated harmony. Play with your cat, sort your laundry, indulge in a tarot card reading, or nurture your plants. It’s your safe, comfortable space where you give yourself permission to feel better.

Whereas most games become increasingly complicated and stressful the longer you play, #SelfCare interactions become more orderly and satisfying. There are no levels of difficulty; no winning or losing. The goal is to just feel good. We’re sold!

We chatted with Brie Code and Eve Thomas, two of the innovative developers behind #SelfCare.

SDTC: What is the #SelfCare app? How does it work?

Brie Code: #SelfCare is an app that gives you a few moments to rest and recharge. It stars a character who refuses to leave their bed. In their bedroom, they are surrounded by their favourite sacred things: tarot cards, candles, crystals. Each object in the bedroom offers a relaxing, meditative task, like a word game or puzzle. Unlike a traditional mobile game, which gets harder and harder until you fail, the tasks in #SelfCare get more and more pleasant as you do them. So, while you energize the character and improve their mood, you hopefully energize yourself at the same time.

Eve Thomas: I have been calling it a human tamagotchi, only it doesn’t need to be fed and nothing bad happens if you forget about it for a few days. [It’s] a little avatar to care for who has its own pet cat that purrs when it’s happy—plus you can customize your bedroom. 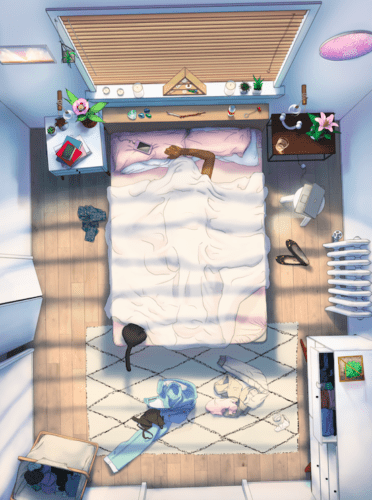 Why was it important for you to create this app?

BC: I have a love/hate relationship with my phone. I know it is powerful and has changed my life for the better, but I also feel stressed and manipulated by it. Eve and I are tempted by the idea of digital detox, but we know in the long run it’s an ideal that sets us up to fail. The world is only getting more and more connected, not less. So we wanted to create an experience that helps us renegotiate our relationship with technology. We wanted to create an app that helps us feel better.

ET: I am not just the writer and co-creator, I am also a frequent user! It has been very fitting to work on this for two very tumultuous years, globally and personally, and it’s been nice to be able to open it up every time I read too many terrible tweets in a row.

Were there any challenges in getting it off the ground?

Yes! We’re making something that is not quite a game but not quite an app. It doesn’t fit into either category. We’re trying something new and uncomfortable at every step: from aesthetics to interaction design to monetization to the marketing pipeline. We’re going against common knowledge about app development–and concerned advice from other developers–and trusting our intuitions about what might be possible. We’re not charging for the app or using in-game pop-ups. We’re not selling parts of the core experience; instead, we’re offering lovely little things that artists who work in themes of self-care have designed within the app.

Who are the #SelfCare users, and what kind of feedback are you getting from them?

BC: #SelfCare users are people (mostly millennials) who are interested in self-care and wellness. They probably use their phones a lot but feel conflicted about it and likely practice some self-care rituals in real life. We are especially inspired by people who congregate around the #selfcare/#witchblr communities on Instagram and Tumblr. #SelfCare is currently available in the App Store for iPhone and will be available on Android later this summer. Our users are finding the app calming and invigorating.

ET: It’s been really interesting to describe #SelfCare to people and see them either have no clue what I’m getting at, or just go, “You are basically describing my life.” We want everyone who might benefit from it to try it out, but I imagine the people who wake up and read Chani Nicholas or carry an amethyst in their bag are going to get it right away.

“I’m completely in love with this! It’s what I do as soon as I get home. I flop down on my bed, play for a bit, and then get on with my evening…I can’t wait to be able to tell my girlfriends about it.”

What do you love most about this platform?

BC: Our phones are the most powerful tools we’ve ever had. They’ve connected us with other people–queer people, activists, artists and authors we can support directly–and help us not get lost when walking home at night.

ET: As much as I have that love/hate relationship with my phone that Brie mentioned, it’s exhilarating to be able to share and have access to so many great ideas, art, essays. I guess the secret is to figure out how to curate it all so you don’t get overwhelmed. I’m trying to make mindful media consumption a bigger part of my own self-care, including what apps I use!

Can you tell us about TRU LUV and what these female innovators are all about?

BC: [I] founded TRU LUV after reading about a theory in the field of stress psychology that challenges the underlying assumptions in every game design book ever written.

Game design largely assumes that humans have a fight-or-flight response to stress and uses the adrenaline rush involved in this response to motivate and reward the player. But it turns out that about half of people (generally, more feminine people) have a different response to stress called tend-and-befriend. People with a tend-and-befriend response aren’t interested in fighting and winning and will find most video games boring. These people are more interested in taking care, connecting, and solving underlying problems in a way that works better for everyone. No one knew about this very prevalent response until recently because most early stress research was done on male rats (because female rats menstruate).

TRU LUV is working together with with Dr. Isabela Granic and her colleagues at the Games for Emotional and Mental Health at Radboud University to explore these ideas. We’re carving out new forms of interactive entertainment to provide spaces for relaxation and growth for the other half of people. We might call this feminist game design, or we might call this a new category of product: not games, not apps—we’re calling them companions.

ET: As both part of the team behind #SelfCare and someone with a background in marketing, it’s been really interesting to see the games and tech industries wake up to women gamers and other underserved markets. When Brie and I spoke at SXSW Gaming in 2017, the concept of care in games was really new, but this year it was a major theme. When we started, Brie had to explain even the concept of wellness to skeptics, and the term “self-care” drew blank stares. But now a lot of companies are suddenly playing catch-up. Unfortunately, it looks like a lot of them are just “pinkifying” apps and games they already have instead of really thinking about what audiences might want.

A lot of wellness apps feel quite ‘90s, kind of like early CD-ROM games (I am dating myself). The people making them either don’t have the aesthetics I’m into, or the wonderful artists working in self-care don’t have the ability to translate those visions into a viable app. (I still don’t understand how much work actually went into #SelfCare’s actual design.) It’s rare to see something that connects those worlds, but I think we hit that sweet spot.

#SelfCare is now available in the App Store for iPhone and will be available on Android later this summer.