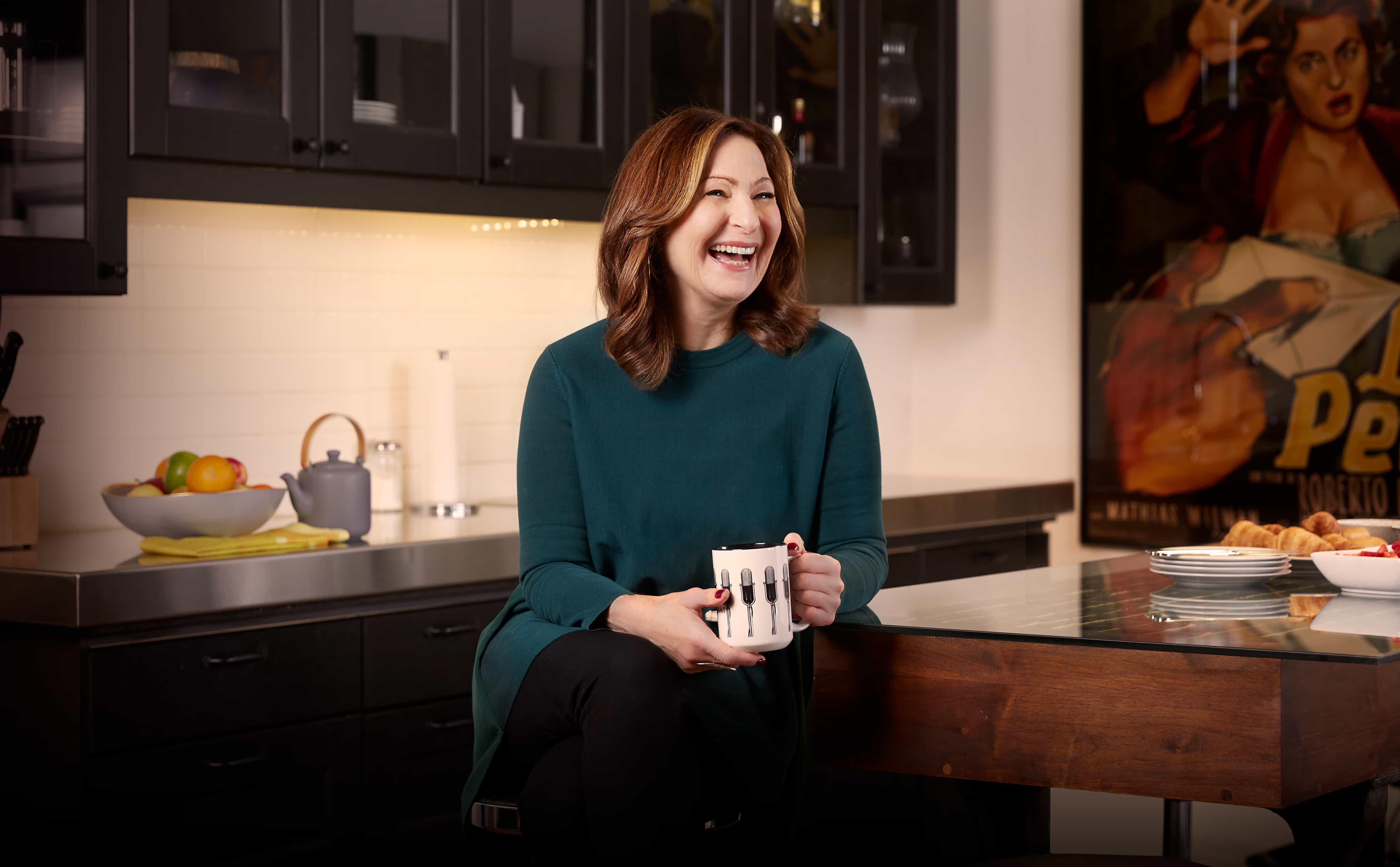 Anna Maria Tremonti was the host of CBC’s The Current for 17 years.

Tough, intelligent, quick, composed: like millions of other Canadians, I’m a big fan. I’d listen to Tremonti near daily. Having worked from home since 2007, she’d always play in the background as I did things—make coffee, write, pick up a trail of laundry. As I listened to her, speaking to everyone from activists to CEOs to world leaders, I’d almost always pause the task at hand for a minute or two and think: damn, she’s good. But Tremonti was ready for a change.

“It was time to try something else,” she says. More with Anna Maria Tremonti debuts on CBC Podcasts next week. Like The Current, it’s smart and insightful, but the long-form conversation series has a warmth to it. While the questions are every bit as bold—the Tremonti we know and love—the style and tone is noticeably more relaxed.

I ask Tremonti if the move to a conversational format—less grilling, more laughing—was an intentional decision. “My confrontation in the past was about accountability,” she says. “If I’m speaking to someone who’s elected or appointed about an issue, that is right in front of our face, then accountability becomes an issue.” Unlike The Current, More isn’t about chasing down trending, time-sensitive news stories. Instead, Tremonti hopes to have in-depth conversations that will illuminate a bigger picture of who her subjects are, diving into their history, their personal lives, and their opinions on matters they aren’t usually linked to. Or as Tremonti puts it: “It’s to talk to people that we know about, who are prominent, but talk to them differently.”

Interviews with Catherine O’Hara, Malcolm Gladwell, and David Suzuki are coming down the pipeline, but Tremonti doesn’t just ask O’Hara about her comedy, or Suzuki about the environment. She dives deeper, and follows curious details as they emerge mid-conversation. “The Current was about very long and directed interviews. There were times when I’d come out of an interview at The Current, and I would have wanted to go down a rabbit hole with somebody, but you just can’t.” Now, she can, and she’s excited to do so.

The change in tone also promises that Tremonti will be sharing more of her own opinions, and bits of her own story. In this sense, Tremonti is wading into unknown territory, outside of her comfort zone. “I come from a very straight-up reporting background. My whole career quest has been to find out what’s going on with other people, it has not been to express what’s going on with me. This is stretching me, quite frankly. I’m a private person and I don’t always want to talk about myself, but I also understand that when you’re having a conversation that’s getting more immersive, that’s not about getting a certain number of facts out in a certain amount of time, if you give, you also get – that’s how conversations work. So I’m offering a little bit more of myself.”

After years of rising at 4 a.m., and working late into the night, Tremonti’s new schedule is less of a grind, allowing her to devote more time to her 94-year-old dad, life partner, and gaggle of girlfriends she holds dear. “I’m not in that intense week. I don’t have a pile of books that I have to get through where I’m backtiming. I’m a little looser in what I’m consuming. I’m still consuming a lot of news, but I don’t have to regurgitate things the next day.”

The move to the podcast will still allow her to do what she loves most: explore and learn. “I always say curiosity is important,”—her go-to advice for young journalists.”Your schooling, that is also important, but you have to care about the world around you, you have to look at things and ask: why?”

Her insatiable curiosity began as a young child, when at the dinner table, she would ask her mom and dad “why-why-why?”. They nurtured her inquisitive mind by not only responding willingly, but earnestly—and kept the questions going. “I come from a family where everyone is interested in everything. Always asking, always learning,” she says. For Tremonti, the search to find answers, to dig more, continues.