"Prison didn't make me, prison broke me. And I see the same thing here in Canada—these women are coming out broken.”
Recovery

"Prison didn't make me, prison broke me. And I see the same thing here in Canada—these women are coming out broken.”

In January of 2021, there were 14,071 people living in Canada’s federal prisons, and approximately 6 percent are women. We rarely hear about the people behind these statistics—the lives interrupted and families torn apart by our penal system. Nor do we acknowledge the fact that many women who wind up in prison were first abused and failed by society as a whole. However, a new CBC podcast called Life Jolt is fighting to provide meaningful representation for the women confined to Canada’s prisons…

Life Jolt premieres on CBC Listen and everywhere podcasts are available this week. The series is hosted by Rosemary Green, a Canadian who served five years in US prisons on charges of drug smuggling. The groundbreaking podcast was three years in the making, and tells both Green’s story, and the stories of women living at The Grand Valley Institution for Women, a federal penitentiary in Kitchener, Ontario.

Almost a decade after returning to Canada as a free woman, Green is ready to share her truth: “I had to go into the ugly part to be able to find healing for others,”  she explains. For her, Life Jolt is both an empowering form of self-expression, and a text that triggers her whenever she hears it: “Every time I have to listen again, it’s re-traumatizing for me. It’s exposing my nakedness again, and showing my scars, my battle wounds, because my prison sentence was my battle wounds.”

From describing the terror she felt when she was arrested at The Miami Airport, to recounting what it was like to fly Con Air, Green generously mines her own trauma to represent the dehumanizing realities of both the Canadian and US penal systems. The result is a podcasting tour de force, the kind of story that changes those who hear it.

Green believes the sentencing in The Canadian Prison System is more lenient than it is south of the border, but her podcast illustrates how both countries dehumanize incarcerated people. Green, a mother of four at the time of her arrest, was unable to see her children for the entirety of her five-year sentence. Life Jolt recounts similarly devastating stories of women cut off from their loved ones and forced to live a lonely existence. While Green believes it is possible for rehabilitation to happen behind bars, she emphasizes the dehumanizing isolation that undermines women’s attempts to heal their lives. “Prison is a form of punishment,” she says. 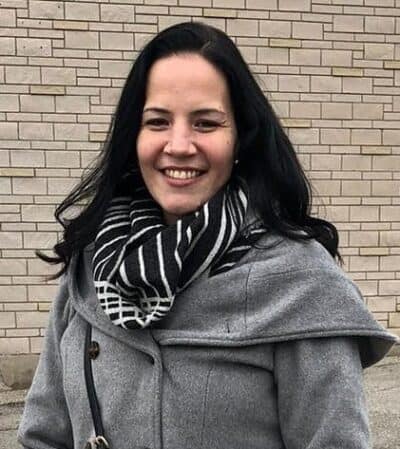 While Green’s present life as a mother and podcaster living in Kitchener is an inspiration, it does not erase the suffering she has endured. When Green was incarcerated, she lost contact with her youngest daughter, who was moved to a different province by her father. When she was released, Green had no idea where her child was, and ultimately found her through social media connections.  Ultimately, it took her a full year to reunify Green’s family following her release. “Prison didn’t make me, prison broke me. And I see the same thing here in Canada—these women are coming out broken.”

Of the many lessons Life Jolt teaches its listeners, one of the most important is how a significant number of women living in our prisons were marginalized and abused before they were ever accused of breaking the law. In her case, Green was a survivor of sexual abuse, which led to PTSD. As a young adult, Green developed a problem with alcohol and found herself in a string of abusive relationships.  She eventually turned to drug-dealing while living on welfare and struggling to make ends meet.

The tragic circumstances of Green’s life are not unusual in The Corrections System: in total, people living in prisons are 4-7 more times likely to experience mental health problems than the general public. Canada’s Corrections System is also plagued by systemic racism. In fact,  42 per cent of Canada’s female inmate population come from Indigenous backgrounds.

In 2021, the conversation about abolishing prisons in Canada is gradually making its way into mainstream politics. When asked for her opinions on this movement, Green responds, “I believe when you do the crime, there should be some form of repayment in a sense, but I wouldn’t say that prison is the first or best option.”

Going forward, Life Jolt will no doubt win acclaim and accolades. And while she is excited to share her passion project with the world, it’s the role of advocate that feels most meaningful. Rosemary Green explains, “I label myself as a woman who is speaking for those who are silenced.”