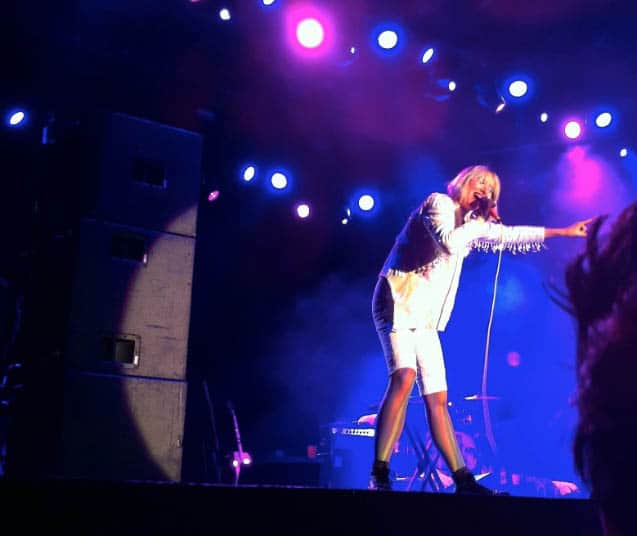 Currently on tour in support of their most recent album, Mosquito, the Yeah Yeah Yeahs frontwoman and her bandmates Nick Zinner and Brian Chase (plus touring guitarist-keyboardist David Pajo) played to a packed Echo Beach this past Monday in a performance that included not one, but two encores.

The 90-minute set featured songs spanning across all four of the band’s albums, including hits like “Sacrilege,” Gold Lion,” “Date with the Night,” “Heads Will Roll,” and, of course, “Maps,” which O introduced as a “Yeah Yeah Yeahs summer love song.”

Forever a fashion force to be reckoned with, O sported white sequined capris and a fringe jacket, later replaced with her signature leather one and then again with a cape. As she bounded across the stage with a little Canadian flag, I found it impossible to take my eyes off of her. While O was undoubtedly the star, her bandmates injected plenty of personality into the performance as well; Zinner snapped several photos of the audience and Chase had what looked to be the best time ever.

I may have been miles away from fireworks and cottage life, but as far as I’m concerned, it doesn’t get much more patriotic than singing, “Wait, they don’t love you like a love you,” alongside a couple thousand people as the CN Tower is lit up in red and white in the distance.