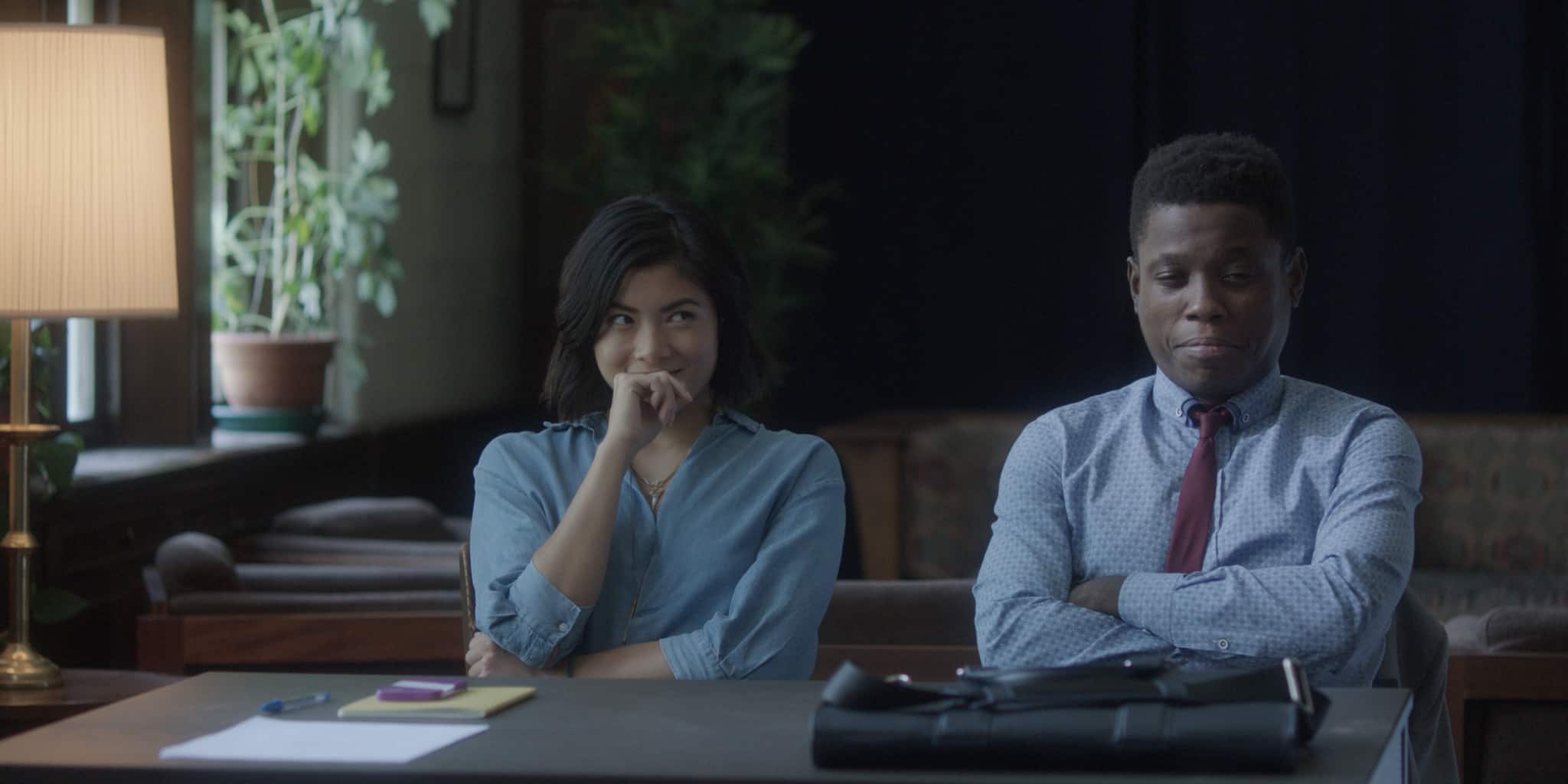 Directed by Li Dong, this tense story unfolds when Chen, an Asian-Canadian university student, is falsely accused of plagiarism. Determined to prove her innocence she’s forced to defend herself in a complex court-case, while also trying to regain the trust of her peers.

Gripping, bold, and timely, Stealing School is a story—and film—that the world needs; it will undoubtedly shake up necessary discourse. We love that the undaunted April Chen defies the Asian stereotypes that we’re used to seeing on-screen.
We connected with Tsai, in her hometown of Vancouver, to find out what drew her to the role, and how it’s changed her.

What was it that made you say yes to this film?

The desire to be seen, challenged, acknowledged. Embodying April’s coldness, the tension between her fear and her force, felt delicious in a world where women are generally punished for coming across as too strong, and stepped on when being too weak.

Also, I needed to pay my bills.

Stealing School was made before Asians were being specifically racially targeted as a result of President Trump blaming China for the pandemic – how has this made you think about racism differently?

I can actually see where Trump has been targeting the Chinese population for a while now. And it makes sense strategically for what he and his advisors are trying to accomplish, seeing where the American economy is in comparison to China’s. There is so much riding on tainting the images of Chinese people, of Black people, Indigenous people, really all folx of colour: financial gains, political gains, keeping certain people and systems in power. It might be worth asking at any point, who benefits from me believing the narrative being presented right now?

Who benefits when black people are subdued, incarcerated, murdered?

What privileges do non-black folx enjoy at this heinous cost?

As for how I think about racism differently, that has been transforming every day. It’s an uncomfortable and painful topic. I’m learning as much as I’m able, reflecting on my experiences and the experiences of others, while also making space for myself when the anger is overwhelming.

What was the biggest discovery you made while creating Stealing School? Maybe a new perspective? Or something you learned that you didn’t know?

What I learned personally is seemingly detached from the plot of the film, but I believe they’re actually connected. I learned that I hate the feeling of letting other people cross my boundaries. I’m so committed to my own boundaries now. Life is completely different. Emotions are meant to get me into motion. If I feel enraged, my body is telling me a boundary has been crossed. I don’t try to ease the rage, I deal with the situation.

This film is also releasing in a moment of time when we’re having a worldwide movement to address anti-Black racism, how do you think it fits into the current zeitgeist, in terms of how cultural institutions, companies, and everyone is currently responding?

Like a lot of pieces of fiction, the battle in Stealing School presents itself as person versus person. Who’s going to win, the accused programmer, April, or the accusing TA, Keith? But the conflict of the film is, at its core, system versus system. Old school traditions of higher-ups imparting, directing, and controlling information versus new school models of learners challenging, grabbing, modifying, maybe even stealing information. Even within April, there’s the Chinese values of family as one unit, versus Western values of individuation.

The battle of system versus system is what we’re seeing here with our worldwide movement concerning anti-Black racism. It’s simultaneously personally and very much not. It can be tempting to go on a “witch-hunt” and try to individually identify white supremacists or racists and out them. (This in turn has sparked a fear among white people and non-black POCs to perform or convince others they aren’t racist, or even if they were before, they aren’t now.) But when the current zeitgeist feels so personal, we can get stuck defending our positions out of pride. This is a distraction from moving into actual change.

I hope we non-black folx can accept that we are racist. Inherently. It’s programmed in us, by a society where key power players benefit from our being this way. It lurks in the depths of our subconscious and we don’t even know it’s there. We didn’t stop being racist when we saw or heard about George Floyd being murdered. Or Breonna Taylor, Ahmaud Arbery, Rayshard Brooks. In one way our eyes opened to the injustice that’s been happening all along, but we are still blind as ever.

Instead of wasting energy pretending we’re wise and good now, let’s ask ourselves, “How do I manage the racist programming within me? How do I manage any programming in me? What does it mean to be programmable? How does that inform my experience of being human? What’s my relationship to this society and how it governs itself?”

Concerning the absolutely critical work on how to transform our sick system –  I go between looking to others for advice and hiding away in a little hole so no one will see how confused or distraught I am. What’s the most effective thing I can be doing? I don’t know. Maybe I’m powerless. Maybe somebody benefits from me being this way.

As for Stealing School being released in the climate of this year, I’m not sure exactly how that will colour it. I don’t know what audiences will resonate with, and that terrifies me. Does a film really have the power to change someone’s mind, or does it simply resonate with people who already agree with its message? Does a protest change people’s inner perspectives, or simply push laws to reflect new ideals? And is that enough?

On a lighter note, what was the most fun part of being part of this production?

I really enjoyed sitting in the hair and makeup chair every morning. That space has so much possibility – the possibility of connecting with others, of grounding with them, of silently absorbing the scenes and lines for that day or getting lost in my own thoughts. The ritual of this time, and really getting to know the artists and knowing who would be there in the room with me every day, was a much-needed touchpoint in an industry where so much changes daily.

Stealing School is releasing in Canada this June on Apple TV and iTunes. Watch the trailer now.