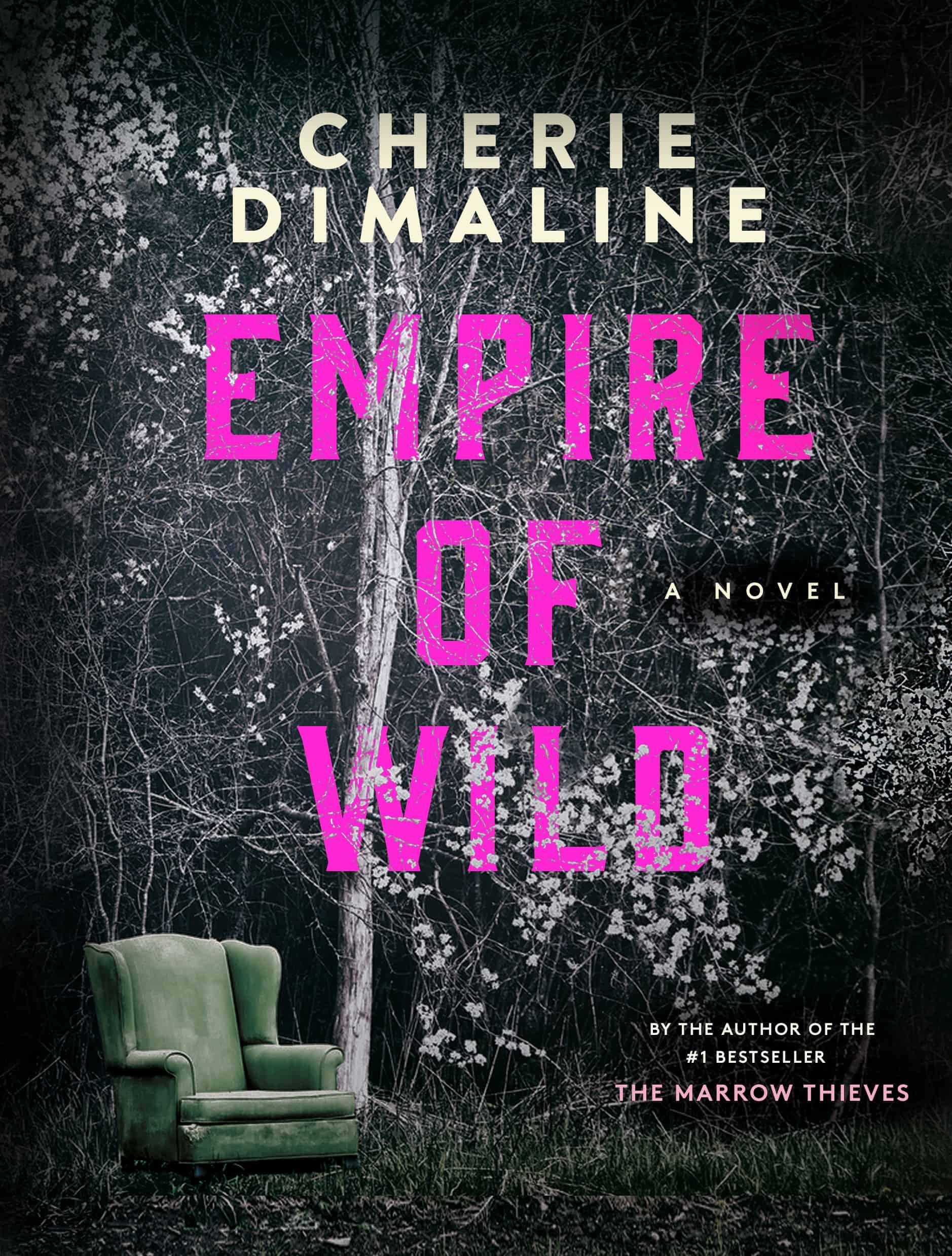 Cherie Dimaline wowed critics in 2017 with her award-winning YA novel The Marrow Thieves, and her new book, Empire of Wild, is goddamn brilliant; you’ll never look at Canadian cottage country the same way.

Set in the small towns, reservations, graveyards, and Walmart parking lots in and around Georgian Bay (where Cherie grew up) Empire of Wild is a gritty love story and chilling mystery, as well as an exploration of Indigenous life in Ontario today, from family dynamics to ongoing oppression.

In a heated argument, Joan’s husband, Victor, storms out, but he doesn’t return. An exhaustive search reveals no clues, and feeling desperate and hopeless, Joan turns to drinking and chain-smoking. Without answers, or even a trail, elders begin to talk about the rougarou, a wolf-like creature that has been haunting the community for years. It is only when Joan accidentally stumbles upon a travelling Christian clergy that she begins piecing together what may have happened to her beloved Victor.

Amidst the smart cultural critique, there are some quiver-inducing sex scenes that made me wonder if Cherie has ever considered writing straight-up erotica? Her filthy mind is equally as impressive as her subtle, dark humour; there aren’t many who dare to bring a comedic element to help spotlight serious issues like colonization, inequity, and addiction. No dancing around to protect feelings, she tackles the tough stuff head on, with a realness that’s practically shocking. It’s most refreshing.

A suspenseful page-turner that is exquisitely written, Empire of Wild is an important commentary of our times. I devoured her book in a few short days, and had some pressing questions to ask her.

JM: How did this story begin? Were you wandering through a Walmart parking lot? Was it born through stories you were told as a child about the rougarou? While you were driving past cottages in Georgian Bay?

CD: I grew up with rougarou stories. It was how my grandmother kept me from putting myself in dangerous situations, especially in the summer when our community was filled with summer people we didn’t know, so he’s always been a part of my life. The actual book was born, like all good stories, sitting in the middle seat on the red eye from Vancouver to Toronto. I started writing it on the back of a barf bag (I really hope a university asks for my papers one day). It was after I read an article in the Walrus on how there was a new wave of Christian missionary churches going into Canadian Native communities and bringing the people to Jesus and up off the land.

Why was it important for you to include modern-day Christianity? And specifically a travelling tent that does its best to convert Indigenous people into believing in Jesus Christ/shaming them for their own beliefs?

In the book, the rougarou has taken the form of a revivalist missionary preacher named the Reverend Wolf. Because we know that there is a link between First Nations communities who are lured off the land and into the church and the vulnerability of that land for resource development, it was an interesting place to have him. It’s a take on an old story that seeks to talk about resource extraction while we are distracted by the Christian god. I found out while consulting just how much easier it is to get approvals through for pipelines, mining, etc. when there is no “demonstrated traditional land use” by Indigenous communities. So the church continues to be culpable in ongoing colonization. 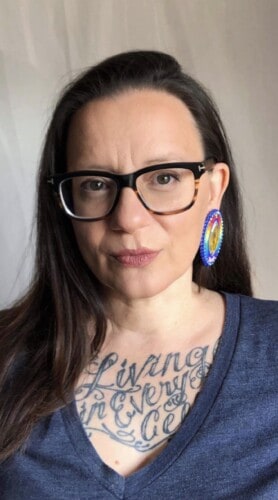 In the book, Joan and her family/community are often referred to as halfbreeds. Is this something you experienced growing up in Ontario?

Absolutely. I grew up knowing my dad was white and my mom was native but never really thought about it. There were so many of us and both my parents were amazing, so it was never an issue. But then one day I came home from school and was sitting on the couch eating chicken soup on a TV tray watching Looney Tunes. In the episode, Bugs Bunny was fucking around with someone as usual and he was putting on a show. A Native guy with a full hook nose and massive headdress walked onto the scene, complete with that Hollywood Indian music and then stopped. He flipped his body completely to the other side and he was a very elegant blond-haired white man in a blue suit. Then he faced the camera head on and was this horrific mix of the two, screaming, “I’m a halfbreed!” before scampering off. I was terrified. And that was the moment I realized that I was an “other.”

All of your description is so incredibly vivid, and I wondered if you’d had experience living with a cult in California, where Cecile had spent some time. If you don’t have experience, how are you able to describe a scene so well?

I LOVE that this is a question. And, honestly, part of me wishes I had a more interesting answer (minus the PTSD). I read before/while I write. Heather O’Neil talks about how she has to read hundreds of books to write just one, and that’s very much the truth. Plus, I went to Catholic school, soooo…that helped in terms of thought control and regimented group living. (Oh lord, queue the letters to the editor…)

Much of your novel takes place in parking lots or strip motels. What is it about these locations that appeal to you as a writer?

There is something so damn beautiful about the ordinary in the extraordinary, about the ceremony in the mundane. We pass so much of our lives looking for the magic and forget that the fact that we are just here is goddamn magical. I like taking all that bland minutiae and stringing them together into something garish and impressive, which is just basically life.

When and how did you become a writer? What helped nurture your talents the most?

I grew up with stories being told all around me. Then, when I was five, I got my first book (Hop on Pop by Dr. Seuss) and figured out that a book is just a home for a story, and I knew right then that’s what I wanted to be. At that point, all I could write was my name, but it’s when I knew, 100%.

I have circled many of your paragraphs, because I think they are so perfectly written. What’s your process as a writer? Do you get up in the morning and churn out page after page? Did you go to the areas you describe in the book and soak them in before describing them? How was Empire of Wild written?

I write at night. I always have. I guess there’s something about being alone in an hour when everyone else is asleep that gives permission to lie and spin and think about the perfect way to describe want and ache. I wrote this book mostly in my home office, which is just a place where I store all my important things—books, art (like my light-up Jesus statue in a sombrero) and some teacups. It’s also where I keep shopping bags from good stores like Hermes and Louis V. When I can actually afford to get myself something nice I try to pretend like it’s no big deal, but I am 100% that person who can’t even throw away the bag it came in because, holy shit.

You’ve moved to the West Coast. How is it different/similar from Georgian Bay?

Moving to Vancouver was partly because I was already there so much working on the Marrow Thieves TV adaptation and so it made sense. Also, when I saw how the entire city shut the fuck down over an inch of snow I thought, “This is a good place to winter.” I plan on never wearing gloves again.

It is very different (there are sea lion warnings in my neighbourhood), but also there is that same abundance of forest and that fearful wonder that lives in them, which makes me want to write.

How are you feeling right now?

First of all, I just saw the best review of my entire life from She Does the City on Instagram. Holy. Shit. Its like someone crawled into my head and saw exactly what I was trying to do and then replaced all the self-doubt with praise. Good Lord.

To be honest, I am anxious. It’s always like this. You work away on this private, glowing thing and then just hand it over and try not to shit yourself when you see strangers reading and commenting on it. I do feel incredibly grateful that people are seeing what I tried to create, that we are sharing a story reel. I can only show up, try my best to connect with readers, and keep working on the next book. God, that sounded so whiny. It’s also fucking amazing. Writing is all I ever wanted to do. Being an author is all I ever wanted to be. And now here I am.

You can catch Cherie and more of the biggest names in Canadian literature all under one roof this weekend at Word on the Street, Sunday, September 22 at the Harbourfront Centre. Get more details here.