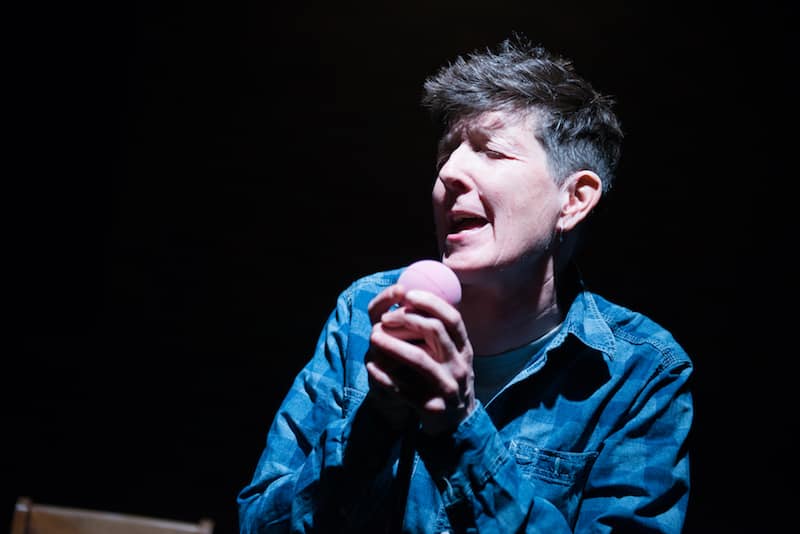 We’re always up for having more conversations about mental health, because there is still plenty of misunderstanding, mystery, and rotten old stigma that needs to be smashed.

While we haven’t yet seen Jan Derbyshire’s Certified (playing at Progress Fest, Feb 13-15) everything about it appeals to us. The fierce one-woman show is described by The Fest as “a hilarious and heart-aching journey through the mental health system. With refreshing humour, this memoir-play cracks open the stigma around mental health and waits for your response.”

Unlike your standard theatre production (nothing is ordinary about Progress Fest), Certified not only encourages guest participation, but JD  turns the audience into a mental health review board to help determine her current state of sanity (awesome!).

JD is not ashamed to share that she’s been certified insane eight different times in life—it’s part of her story and has got her to where she is today.

You deal with a lot of heavy issues in ‘Certified’ but you do it with humour; why is that?

I don’t think of it as dealing with heavy issues. I mean I would never say, I live with a lot of heavy issues. Just like everybody else, I’m just trying to deal with what life deals me. Also, I’ve never understood the separations of genres into tragedy and comedy. I move in and out of tragedy and comedy all the time. I mean, I love the sound of an audience surprising themselves with a big laugh but I also love when the story is so compelling and people are so tuned in that all I hear is nothing. And look, a laugh opens the chest and that opens the mind. So after a laugh, I can take us all a little further into the dark and then I’ll create another chance for a laugh, like lighting a match in a cave and seeing there really isn’t a man-eating tiger in there.

What do you wish more people knew about mental illness?

That mental illness is a highly individual experience that often has more to do with trauma and how it effects the brain than chemical imbalances.  That we don’t know much about it, that psychiatry may be good at interrupting a mind in crisis but not so good in helping us live the long-after that follows a crisis. Or maybe even what it’s like to live a meaningful life between crisis. That medication may be a part of what we need but it doesn’t work for everyone. That we also need to empower people to become aware of their emotional regulations and thinking styles. It’s possible to learn how you think and feel and know your limits and what happens and what you need when your triggered.

How would you like to see the healthcare system/society change when it comes to treating those with mental illness?

I feel that the psychiatric system is set up right now for crisis. I’d like to see it set up more preventatively. I mean, imagine every city has these fleets of tiny houses, and when you can tell you’re getting overwhelmed instead of having to wait for things to get really out of hand and need to show up at an emergency ward to save your life, you call the Tiny House Brigade. And then, no questions asked, a tiny house is yours for a few days of respite and all the pressure is taken off and your meals are provided and voila, you catch up on sleep and time with friends, reset and you’re good to go. And this would be available to everyone; you wouldn’t need a diagnosis, just some awareness of reaching your limits and asking for a break. No shame, no blame. Simplistic I know but not such a bad idea right? I mean, I think it’s something like a thousand bucks a day to keep someone in a hospital, so tiny houses, yes!

Also in the play, I talk about starting the Fundamental Foundation, get it…Fund A Mental. And this foundation sees psychiatrists, naturopaths and therapists working together and the government will “fund a mental,” many mentals.  Also, I think we need to more honest that when medication works or helps, that is awesome but, it doesn’t work for everyone. And blah blah blah, I could go on forever about this stuff but enough for now.

I hope they feel deeply entertained and glad they saw the show. I hope the audience appreciates the storytelling and the craft and maybe have some laughs and some cries and some confusion and joy and maybe even feel the sensation of grief pass over them like a shadow and leave again.  Maybe, I’ve moved them from one part of their brain where they were so sure of something into another part of their brain where they are not so sure of something. Maybe they take away a perspective they’ve never had before, maybe they have some questions to roll around or curiosities they’ve never had before. Maybe they take away a blast of gratitude for this wild ride called the human experience.

Fuck, those are great responses. Certified is playing at Theatre Centre on Queen West, Feb 13-15. Reserve your tickets now.