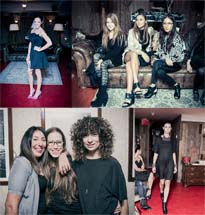 Of all the fashion week shows, both rogue and official, the collection I was most excited to see was the relaunch of Common Cloth at the newly opened Soho House.

Common Cloth was born in 2002 by sisters Melanie and Kristina Bozzo. They were in their early twenties and gained a loyal following fast. In 2003, they opened a store in Parkdale way before it was a destination with venues like Wrongbar and Grand Electric; it did not resemble the vibrant strip of cute independently owned boutiques that populate the West Queen West stretch today.

They were young, daring, hardworking and talented. But even with all those attributes, owning a business is hard. Fucking hard.

We lamented when Common Cloth closed its doors, especially so when the space was turned into a garish souvlaki hut, but Mel and Kristina were young. They needed time to do what twentysomethings do: travel, experiment, live, learn, party and grow up.

Older and wiser, they have now teamed up with another sister, Amie, and are back to take on Toronto on their own terms. “This time we’ve designed for ourselves; what we like to wear.” Says Kristina. “Darker, streamlined, minimal but a little more of what we like. We got inspiration from all of our smokin’ hot girlfriends who were all in the show. They’re the kind of women we design for.”

Unlike other fashion shows this week, with doe-eyed teens teetering in heels like nervous colts, the Common Cloth show was a refreshing change. Edgy and assured, models were the kind of thirtysomething women who regularly stop traffic with their confident stride and original style. As a thirty-three year old woman watching the show, I felt like the collection was speaking directly to me.

What’s even better than a dozen babes from Parkdale storming the Soho House third floor in dark utilitarian hooded dresses? All that with some provocative Biko jewelery.

Biko founder and designer, Corrinne Anestopoulos, has been friends with the Bozzo sisters for years. Like the Common Cloth collection, Corrine’s necklaces, bracelets and cuffs are both beautiful and tough. She describes the woman she designs for as “powerful, confident and independent.” It’s the perfect match.

The overall look is exactly how I’d love to dress every day. But what is even better is how all these cool women come together, help one another, to create fashion that epitomizes who they want to be, who they are and who I strive to be: strong, thoughtful, individualistic people who aren’t afraid to take chances in life.

Looks like we’re all growing up at the same time.

Biko and Common Cloth will be unveiling their collection to the public at an event in the month of November. More images of collaboration here.

The limited-edition collaboration collection will be available exclusively through special order via hello@ilovebiko.com or at pop-up shops throughout Toronto.

Photo gallery of attendees and a few pics of special capsule collection. (Click to Enlarge)